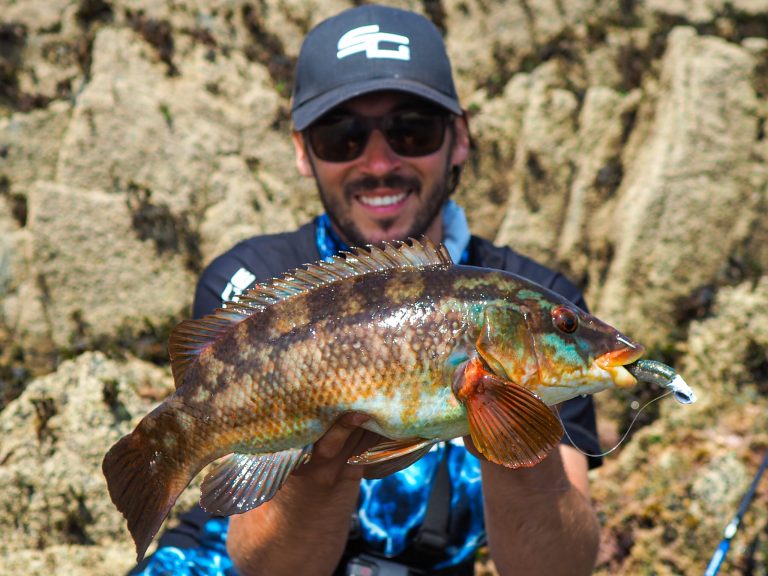 With the Sea Angling Classic at Hayling Island finished, it was time for the next leg of my journey.

Wrasse inhabit rocky areas of coastline. They feed on an array of food, from scraping limpets off the rocks to chasing down goby and sand eel. Wrasse will happily feed on crabs and shrimp too. With incredibly powerful jaws and strong physique, they are perfectly adapted to feed in the breakwater of the rocks, although often retreat to calmer areas in rough conditions. The variety of wrasse is unrivalled, uncountable colours and patterns in one species, and there are sixty-plus worldwide. My favourite perhaps are the specimens that show a little bit of everything.

Ballan wrasse can grow to over 9lb but a 3lb+ fish is a great catch from the shore on lure tackle. They give a dogged, hard fight, often snagging you amongst the kelp and rocks, leaving hit-and-hold fishing as the only real option to stop a fish. Rods in the 5-20g or 10-35g casting range will handle specimen wrasse when paired with a powerful reel and 20lb braid. 20lb fluorocarbon will resist teeth and rocks. Lures in the 2-3inch range are perfect, and weedless hooks are almost always a must. In terms of action you fish for wrasse much like perch, hop and bounce the lure along the bottom, coupled with pauses, it’s often the most productive way. Anyway, let’s move onto the rocks…

Joined by my good friends Rob and Sam, we arrived at the first mark. The cove was calm and water crystal-clear. The twins had never been wrasse fishing before, so we decided to start at the deep end. We paddled out to an exposed rock, using the dry bags to ferry the gear. From there we would have the perfect angle to fish the deeper gullies and kelp beds inaccessible from shore. The plan was to catch some clonkers before the tide ran out, then move on to some fresh areas.

(Swimming to a spot is never a good idea unless you really understand the area, currents and tides well. Carrying the correct safety equipment is a must, and when rock fishing I always pack a first aid kit and throw rope. We always fish in a group and wearing a life jacket is advisable in many locations.

Without careful planning these kind of trips carry great risk. The rocks are often sharp and treacherous. Ensuring you build an understanding of wind, tide and exit points is essential in ensuring safe access. We picked very safe conditions and planned ahead for this trip. There are many safe places to fish for those looking to give it a go, such as harbour walls and rock-lined coves etc.)

Rigging up on the rocks we were filled with confidence as shoals of sandeel and baby pollack circled around us. There would certainly be wrasse here. With an abundance of fish present, I decided to rig up with a Savage minnow, casting into a deep gully, while the twins worked their lures through surrounding features. Rob was first to hook up, his rod hunching over as the fish ran. He gained some ground, seemingly keeping the fish from the snags. Suddenly, the fish charged off, and in a desperate bid to keep it from the rocks he pulled a little too hard.

Bang! The rod snapped clean at the spigot and moments later silence was replaced with the sound of frantic curses. I’ve never seen a rod break on a wrasse before, but keeping a fish from the snags really does push the limitations of the kit. While still in disbelief, and on one colossal rant, I made matters worse. Thump! The tip slammed around and I hooked up with a powerful wrasse. In tight quarters it was a hit-and-hold battle, the fish trying hard to dive into the rock crevices and break me off. I stood my ground, not willing to give an inch when the fish made a desperate dash for open water. The locked-up drag screamed with the run, but with nothing to dive into the fish soon gave up and hit the net.

Awestruck! I set eyes upon probably the most beautifully coloured wrasse I have caught. I slipped it back, having captured my trip’s target, and although many followed it remained my best for the day. Having caught my target, I stepped back allowing Sam to take the swim and after a few small ones he also managed a stunning fish of great proportions. Shortly after, Rob, who had just finished setting up the spare rod, managed his prize. A truly spectacular start to the trip. Once the tide retreated we continued on, searching fresh areas and banking plenty of smaller fish. Time flew by quickly, and soon it was time for the hour-long walk back to the car, eager to return to camp, sleep and prepare for day two…

Start typing to see results or hit ESC to close
salmon fly fishing chub roach pike
See all results
More Stories
Simms Fishing Site Gets A New Look
This website uses cookies to improve your experience. We'll assume you're ok with this, but you can opt-out if you wish.Accept Reject Read More
Cookies Policy