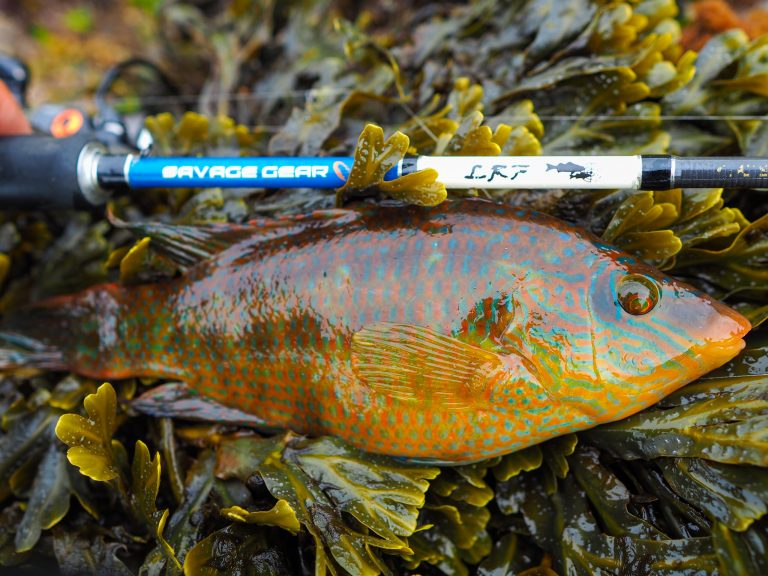 Day Two of our wrasse adventure began, with rain and high winds bombarding the tent, laying waste to our morning’s plans. Changeable winds from a huge storm system would make finding safe areas to fish difficult. We scoured Google Maps for sheltered coves and bays, unable to find anything close by. Instead, we settled on targeting the mouth of an estuary on the evening tide, a prime location to catch a few bass. Although the fish were small, we were happy to salvage the day, and were eager to set out on Day Three.

Day Three arrived and we faced the same storm system! However, as it passed over us the strong Southerly would begin to shift a little more to the West. This opened a window of opportunity, granting us the chance to fish bays and harbours sheltered by rocky, hilly mainland. We picked an area on the map that would grant us much-needed calm water, and set off eager to catch some fish.

We struck gold! The new area was stunning, offering clear water and shoals of small baitfish. It wasn’t long until we found wrasse. Jigging around the submerged rock formation, we quickly began catching. The majority were smaller fish than Day One, although equally as beautiful. As the tide receded, we continued on tempting a few each around the 2lb mark. Thrilled with our wrasse adventure, it was time to mix things up. We put aside the big rods and pulled out the micro gear, eager to try some species hunting with the LRF tackle.

LRF (Light Rock Fishing) is really fun. Fishing for anything and everything, big or small. There are countless species to catch, with a mixture of lures from micro metals and plastics, to ragworm imitations like Isome and Gulp. The latter are much easier to get to grips with for a newcomer. We picked the smallest rods, 1-5g and lighter, and coupled them with fine braid and fluorocarbon. 4-6lb is perfect. Going lighter can be better, but there’s a great chance of picking up a decent wrasse on the tactic. There are many rigs to use, from simple split shot rigs to dropshot, and micro jigs. We decided to use 1.5g chebs, coupled with small hooks, covering the slightly larger scale of LRF fishing. We fish these like any other lure, jigging them slowly in open water and around the rock faces. Sometimes the opportunity to sight fish comes up, with the excitement of stalking blennies and giant goby in shallow rock pools. My target species was wrasse, but not the giant ballans. I wanted the much smaller and incredibly pretty corkwing wrasse. These small fish really fight pound for pound, and are certainly a fair challenge on LRF kit.

We started the micro-adventure with the rock pools, targeting giant goby and blenny. While not hard fighting fish, the frustration of teasing them out of their hiding places, and tempting them to take a little lure in plain sight, leads to quite exhilarating fishing. They spook easily, approaching the tide pools with caution is necessary. It wasn’t long before the twins and I had managed a mix of blennies, giant goby and even a greedy scorpion fish. This UK variety is not venomous.

Next it was time to tackle the open water and find the elusive corkies. There were plenty of small pollack to target around the kelp, and after we had had our fill of those we dropped into deeper holes for wrasse. Smaller ballans from ounces up to a pound or so made exciting sport. They hit the lure hard and strip line in powerful bursts as you try to keep them from the snags on under-gunned kit. Often the battle was lost as they threw the lure in dense kelp. The thrill of downsizing and taking that chance made for some of the most exhilarating fishing of the trip. Each cast providing a mystery, while every hook-set led to an epic mini-battle.

While searching each and every corner of our rocky hot-spot, I finally found a shoal of my target species. The electrifying blue stripes and dots of a corkwing wrasse appeared as I retrieved my lure over a rock ledge. I quickly cast back down, grabbing the fish’s attention. Unfortunately, it skulked back into its hiding place. I dropped down again, working the lure deeper and soon received a tentative tap. I struck, and the rod hunched over as the micro powerhouse dived deep into the kelp. I teased it out and an aggressive battle followed, with the main snags cleared, I soon landed a great-sized corky. I continued on enjoying the action of the little beauties until it was time to leave.

After a pub meal and breaking camp, it was time to move on. I bid farewell to Rob and Sam, and set off on another two-hundred mile drive for the next leg of my fishing road trip. 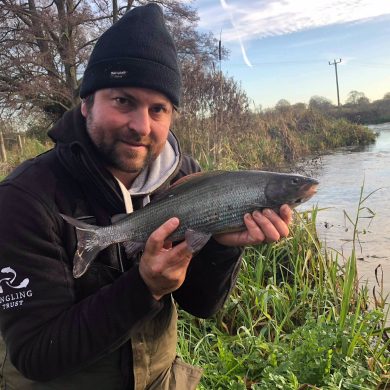 The Angling Trust? Are you In or Out?
This website uses cookies to improve your experience. We'll assume you're ok with this, but you can opt-out if you wish.Accept Reject Read More
Cookies Policy