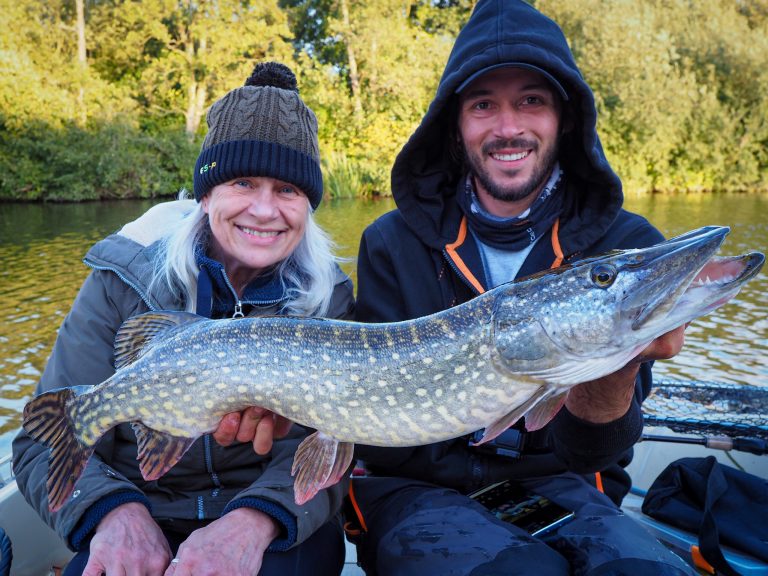 Alongside tracking down perch we’ve been out targeting pike. Usually, October is a month full of insane action, aggressive takes, and numbers of hungry pike. This season has been a little more of a struggle. Pike numbers are certainly in decline, and with the recent approval of the great broad project, Broadlands’ fishing future remains uncertain.

Despite over seven years of study and analysis, proving that Hoveton Great Broad is an essential habitat and major spawning site for bream, the Environment Agency folded to Natural England’s plans to separate the waterway, and remove the fish in a bio-manipulation project. Flushing the research down the river as eagerly as the water companies ditch sewage in a downpour. It seems our favourite aquatic inhabitants really are being defeated in many ways.

Anyway that’s enough rant for one blog. There are still great fish around, and struggling is as much down to my poor fishing decisions as any other problem. So it was time to find the solution…

Lure size and clear water have been the biggest factors that have influenced our fishing in recent weeks. Rain water has had a very different effect here, cleaning out the broads rather than colouring them. This clear water has presented some interesting challenges. While casting our regular pike size lures we’ve had an abnormal number of lazy follows and aborted takes. During the day the side-scanning sonar is picking up few fish in the river, with more showing after dark. Night lure fishing is one option of course, but how do we capitalise on our daytime sessions?

Fishing closer to dawn and dusk has produced fish, that leaves a very long quiet part of the day. Moving to tidal areas where the water is more coloured has helped with putting a few fish on the boat. The biggest factor influencing success seems to be lure size. Small lures pitched into deep cover have been successful at singling out daytime fish. Explorative casting with flashy little vibe baits and jerkbaits have proven productive too.

When it comes to chasing down consistent pike it seems going bigger has been the key. While in past years I’ve found 15-20cm lures to be plenty large enough, it seems now they want a proper meal. It’s been time to pull the big lures out, and fishing with giant 200g-plus swimbaits and tailbaits seems like the most consistent way to get the bites. I found myself raiding the box of big bait classics. Lures like the Savage Gear 25cm Line Thru Roach and 30-40cm Burbots.

Fishing with lures like these is tiring, 8ft 6 heavy swimbait rods, with a power winch of a bait caster, loaded with 80lb braid. The difference has been phenomenal, no more lazy follows just slamming takes. The average stamp has still been relatively small, with scraper and low doubles, however we’re getting somewhere. I’m sure as the rivers cool and colour up the bigger fish will begin to show. It’s still early after all.

On to a few catches.

Sam tempted this pike on a small lipless crank, a little 9cm Rapala. We had set out early that morning in darkness, arriving at the first spot of the day in heavy mist. After a short while fishing in the area we noticed our lures bumping the backs of baitfish quite high in the water column. I suggested we switch from slower shads and tailbaits to lures with a little more action, picking out hardbaits. The change quickly produced a few fish. Then suddenly, Sam’s tip slammed around and he was in to a better one. On light tackle the fight was fierce, the fish used the flow to full advantage. Expecting a fish much larger we were surprised, but not disappointed, when a pretty low double breeched beside the boat.

Ben also experienced results with smaller hard baits. After a morning’s perch fishing, we moved into a shallow area where predators often hunt. Working away with a range of lures the swim was uneventful until Ben rigged up a KVD Jerk. Flashing and twitching the lure along the drop-off in hopes of a perch or pike, his wish was quickly granted. A slack line take followed by a steady run from strong pike. The subtle approach had worked again and Ben quickly netted a double.

I on the other hand, continued to persevere with the big lures, hopeful that I’d tempt a giant. Well, the giants were elusive, but upscaling did bring some great action. Casting the big lures shallow and drawing them out of the cover produced some really exciting action. Fish in the low doubles inhaled the giant lures at the side of the boat. The fight’s just as hectic on the heavy gear, with more power and contact direct to the fish. Noticing the resistance, they try hard to shake the hooks, often leaping and tail walking in the end stages of the fight. Exciting fishing.

Next week it’s back to perch, with trips to some new venues planned over the next few days. 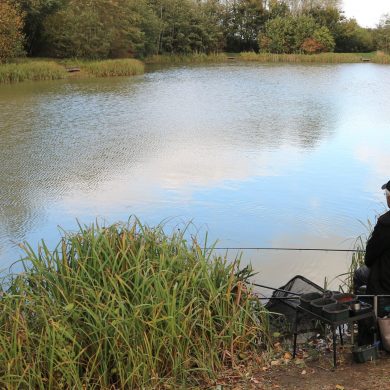