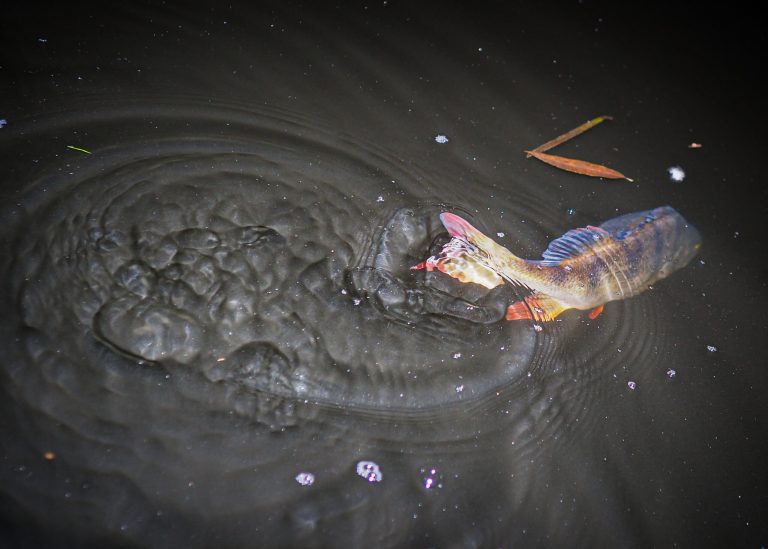 It’s been an eventful week, many miles travelled across countless venues, with plenty of perch action and lots to write about. So where do I start? Let’s begin with the changing conditions and first leg of my journey.

A weather front had set in, smothering England in a cloud of conditions that predator anglers dream of. A long high-pressure front has drawn to a close, replaced by wind, cloud, rainstorms and more importantly, low air pressure. It was a sudden drop, within a day it had plummeted to the sub 1000s, and the drop continued to 990mb. These are conditions I relish for a big fish. While they sometimes take a while to adjust, a steady week could lead to a great chance at catching a giant. I crossed my fingers, hopeful the smaller stamp of fish would slow down and the big ones would feed. In these conditions it can feel dire at times, but once you get it right you’re rewarded.

I hopped in the car southbound, ready for a couple of days filming. Beforehand I had to drop by the twins’ (Rob and Sam) place in London. With a day spare, I was keen to experience some Southern perch. We arrived at the canal in darkness for our first spot of the day. As expected, in the conditions bites were few and far between. Then we found them. Sam cast a creaturebait tight to a far bank bush, hooking up to a great perch at 2lb 12oz. Moments later he was in again, an almost identical fish.

I quickly covered the area with my lure, hooking up to another solid perch. A few jagged runs later and the line went slack! It was gone. My best chance at a really big one for the day. Not disheartened after losing a fish we carried on. Trying some river sections too. All in all a great day, with some lovely perch and bonus pike. We never quite matched the morning’s action and the real monsters remained elusive, wondering if I lost it that morning.

The next morning began with a drive further South West, and later North, on a two-day video shoot for the Savage Gear UK YouTube channel. The plan, to create a series of fishing tutorials that also showcase an amazing range of lures coming later this year. To make the challenge interesting, we decided to mix things up. Instead of doing all the fishing, I was joined by Ed Betteridge from Prologic. Ed’s an accomplished carp angler with very little lure fishing experience.

Now here’s the challenge, to tutor Ed on the rigs, techniques and control needed for lure fishing, while ticking two targets off the list over two independent sessions. Target one, a PB perch or 2lber, and target two a PB Zander. Canals would be the venue of choice, and we certainly had a mammoth task ahead. After building confidence with smaller perch, Ed fished with finesse. It was time for me to take a step back.

Sure enough, an hour or so later he connected to a much better fish. The rod hunched over and Ed yelled out with excitement. I sprung into action, bounding down the towpath, net at the ready. Arriving without a moment to spare as a sizeable fish thrashed at the surface, I lunged towards it. Seconds later and it was in! Kicking off what would become a great two days for Ed.

It seems fitting to write about monsters. Typing away on Halloween Eve, ghosts, ghouls, but I prefer monsters from the deep…

Keen to capitalise on the low pressure conditions I ventured out, braving the high wind, gloom, and showers. Fishing was tough, a bite here and there, with long periods of inactivity between. One return trip to the car for a fresh set of dry clothes, it was one of those days. The average stamp was great, keeping me motivated. While searching for a big perch I caught a few pike up to low doubles, and a handful of chunky perch in the pound plus range.

Time was running out. With darkness beginning to take over, the bites dried up on conventional soft plastics. I spotted a swirl around scattering fry, close to structure, and quickly rigged up with a crazy blade jig and cray trailer. I cast towards the action, unsure if this was a perch or pike, hopeful for either. The jig hit the deck and I flicked the rod tip, creating aggressive bounces, triggering the blade’s motion before pausing and letting the cray do its work. Bounce, sink, pause, repeat. Super-focused knowing a fish was in the area, it felt like an eternity as I continued my repetition.

Sink, pause, bang! A ferocious take, I set the hook hard, the fish responded by ripping several yards of line from the drag before kiting to the left. A pike? My instinct told me to take it steady, backing the drag off slightly, allowing the fish to take another short run. The head shakes began, thumping through the rod in a much more perchy style. I’ve been fooled before. Suddenly! Through failing light I caught a glimpse. The epic proportions made me uneasy, certain a four pound perch was on the end of the line. I coaxed the fish towards me, net at the ready and stomach in mouth.

It was over! I stayed silent, revelling in the moment, gaining my composure. At 48cms on the comp measure, this fish was big, amongst my longest. I was surprised when the scales only read 3lb 14oz. A crayfish away from that magical 4. One corker of a fish and my best so far this winter, a tough one to top, but there’s plenty of time yet. Watching that beauty return to the depths had ignited my perch passion, eager for the weeks ahead.

Start typing to see results or hit ESC to close
salmon fly fishing chub roach pike
See all results
More Stories
SPECIAL OFFER – Great Deals from Fastnets
This website uses cookies to improve your experience. We'll assume you're ok with this, but you can opt-out if you wish.Accept Reject Read More
Cookies Policy