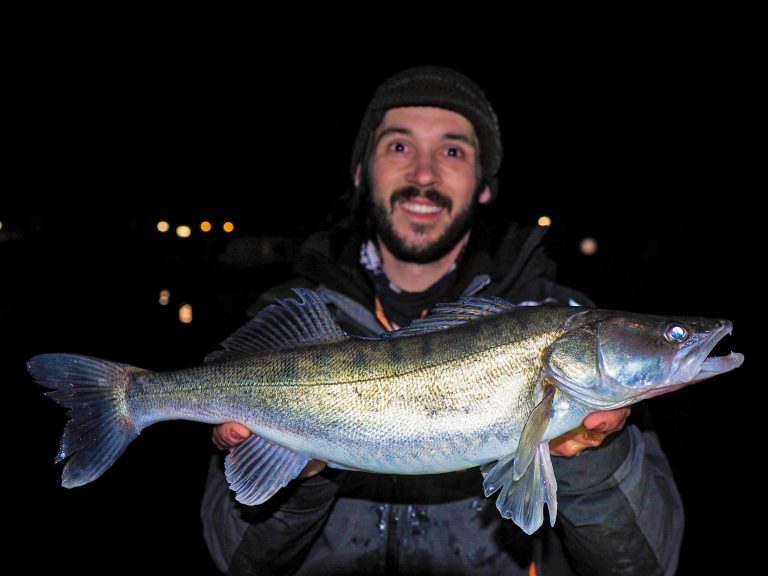 Back to the Night Bites

In amongst my perch fishing antics, I’ve been revisiting those tricky, toothy, critters that often drive you to insanity… zander.

Short evening and night sessions have been the main goal. Targeting them during key feeding times, and cashing in on a quick bite on my way to and from other venues.

I met Rowan at the Lathams open weekend months ago. A keen young angler, full of passion for the sport, Rowan’s been making great headway with the carp. Now he’s turning his attention to predator fishing. Over Christmas, Scott (Rowan’s father) approached me to arrange a day on the bank. We planned on covering a range of light lure tactics and rigs, hopefully to set Rowan on the course to go out with confidence and catch a few belters. The day arrived and in usual form a cold snap had hit overnight, coupled with floodwater, we were in for a challenge.

But both Rowan and Scott were up for the task. After an hour or so practicing knots and lure retrieves, Rowan found his rhythm and in a short time was able to work and control a lure effectively, maintaining contact even in flow, and naturally it wasn’t long before he caught a few perch. The mid-day sun really heated the action up. Rowan banking three quality pike in just 15 minutes of mayhem, big creature baits producing the goods again.

As the session drew to a close there was one species that eluded us. I invited Rowan and Scott to join me at a zander venue, combining our efforts to put one on the bank. Bites were hard to come by so we scaled down, and down, fishing finesse dropshotting techniques. Finally, I hooked up to a zander, able to put one in the net for Rowan to see firsthand. Another magical species I’m sure will capture his imagination in the future. Just a few days later I received a message that made my day. Rowan and Scott had gone out, using some of the tactics we covered during our session, and banked a quality 2lb+ perch.

After finishing last week’s perch session, I didn’t feel ready to call it a day. Daylight was clinging on and I just felt an urge to go zander fishing. It’s an addiction. Arriving at the venue I was met by a familiar face, one I hadn’t seen in way too long. Adele had fished a hard session using finesse dropshot tactics, but with darkness drawing in she was more than keen to stay for a few hours, hopeful of a zander bite.

An hour passed without action so we moved to an area nearby with a nice slow slack. Adele continued on the dropshot, but after a few minutes I didn’t feel confident. Instead, rigging up with a shad on the lightest head I could get away with. I cast out to the edge of the slack allowing the lure to slowly fall before flicking it up with big vertical motions, repeating the process. I flicked the lure up and began the drop.

Bang! A ferocious zander take. The rod vibrated in my hand as I set the hook. On ultralight tackle this one felt like a powerful fish as it reached the flow. Rod doubled over, I eased the fish back to the slack, gaining a little bit of ground before steady runs, beginning to think I had hooked a pike. A bright silver flank flashed beneath the surface revealing a nice zander, I quickly made a jab with the net, landing my prize.

Meanwhile, Adele had also hooked up to a slightly smaller example, but welcome all the same. We grabbed a quick photo and released the fish. We tried a final ten minutes before heading home, unfortunately Adele lost a solid fish and aside from a few more small zander and a perch there wasn’t a lot to write about.

After a failed attempt at filming for Savage Gear I needed a pick-me-up. And what better way to cheer myself up? You guessed it… Zander fishing. This time I arranged to meet up with Ryan from Predator Tackle for a social, and to claim back a few packets of lures he owed me. The session quickly turned into quite the night, bumping into some of the local lads and catching a few fish. They took some working out, but after a dozen visits to the tackle box I settled on a natural, subtle 9cm shad.

Once again I fished light, picking out a 2-10g rod and weight that barely held bottom. I crept into a swim with a deep hole nearby, casting across and flicking my lure on a tight line as it swung round, bouncing the bottom en route to the drop-off. Whack! As the lure reached the ledge the rod buckled over and a nice fish barrelled down the flow. The fish soon turned, and with the rod tip high I eased the zander upstream, where it broke the surface.

Spotting the light hook hold, my nerves took over, each turn of the handle threatening to alert the fish, which could slip the hook with one aggressive head-shake. With the net positioned ready I guided the fish towards it, the hook pinging free immediately! With such hard bony mouths zander are masters at slipping the hook on light gear. Not today… just a second too late to make a crafty escape this time. My tough day had turned around in one bite and Ryan even banked a few too.

Start typing to see results or hit ESC to close
salmon fly fishing chub roach pike
See all results
More Stories
Carp on the Fly with Paul Sharman
This website uses cookies to improve your experience. We'll assume you're ok with this, but you can opt-out if you wish.Accept Reject Read More
Cookies Policy