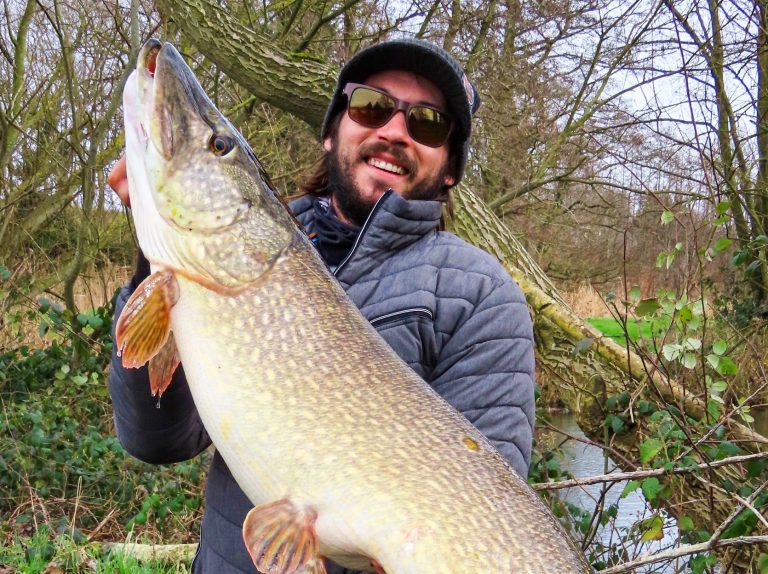 The Year of the Monsters

2022! More like twenty-twenty wooo! But I’ll dive into that later. This past week of fishing has been somewhat incredible.

I kicked off the week with some good old perch, with a twist… See, I was a man on a mission, and a bizarre one at that. As most of you know I’ve been learning my way around the use of live sonar. Lowrance ActiveTarget to be precise. For those that don’t know live sonar, I will explain. It uses a high frequency of acoustic waves, combined with a very smart processor that relays the information to your screen in real time. This enables you to look ahead or below, and see fish before passing them, study their behaviour, and even watch them take a lure.

That was the challenge. It sounds simple but the set-up has to be perfect. So having gained practice, I decided to set out and try to record myself sight fishing a big perch through the screen. I wasted no time heading to the spot. I had found a tight shoal of perch in structure on a recent session, figuring they wouldn’t be far away. The hunch proved correct, there they were, behaving in exactly the same manner as last time.

I positioned the sonar, casting a creature bait into the shoal. Moments later I hooked up with the first fish of the day, a pretty two pounder, followed by several more smaller examples. Surely, I had the footage I wanted. I stopped for an hour and skimmed through the footage, disappointed that I’d missed the whole process on every single clip. I decided to anchor closer to the shoal and upsize my lure, giving me a much higher chance of capturing the moment.

I cast away, allowing my lure to slowly fall, pause, then jig. I watched as perch inspected the lure, refusing to take. With a good handful in the shoal it was just a matter of time. I cast again and watched as one of the larger shapes turned facing my lure. The moment was tense, my eyes glued to the screen as the fish approached. I jigged again, lifting the lure and watched as it merged with the shape of the fish! Simultaneously, I felt a tug, set hook, connecting with a large, powerful perch.

I averted my gaze from the screen, focusing on the fight as the perch dived toward the engine, with the tension on I steered the fish away, taking the fight to open water. Moments later it was in the net! Mission accomplished. I looked down at a beautiful dark perch. A long lean fish with a huge head, mere ounces under the 3lb mark. That alone made my day.

As you know, I’ve neglected the pike this year, having a brief go in the autumn with fairly poor results, and a few successful kayak sessions in the fens. Last year was amazing with fish to 28.8, rivalling my lure PB. I finished that season with a great score of 20s, never encountering that dream 30. With perch to 4.5, Chub to 7.10, Zander to 13.2. The 30lb pike was the final fish on my big lure hit list. So often, only putting the time and effort in will reward a fish of that calibre.

I sat at home, waiting for the onset of Storm Eunice, when I received a message from a great friend. A simple “Free Wednesday?“ Absolutely, Mr Bailey, count me in! Big wind, falling air pressure, perfect pike conditions. So we pencilled it in. Like good times past, I couldn’t wait to start. In fact, the day reminded me greatly of one we spent together a few years back, a similar storm, a special day, we banked a few epic fish.

I began the day, braving the wind and working through the lure box. It was fierce! The strong gusts sucked the air from my lungs. But the sensation of extreme weather filled me with excitement and adrenaline. I started with big tail baits, struggling without a bite. I covered each swim then switched to a smaller jerkbaits to double-check.

Hours passed and the smaller lures began to produce. I soon figured they were keyed into a mixture of small size and high flash so I switched it up again. Rigging up with a Crazy Blade Jig Head and 11cm shad. To fish a lure so small, I compromised on the rod strength, picking out a 6ft 6ins 7-23g zander rod, hopeful if I found a big one it would be enough.

After many hours and six small jacks I felt a bump and set the hook. Instantly, it bumped off without so much as a movement, a snag? I don’t remember there being one there on the last cast. I covered the area for several more minutes before changing angle on the swim.

Bang! This was no snag, the rod doubled over and a huge boil appeared on the surface. Instantly I knew that this fish was huge! I held on, increasingly anxious, and the fish swam toward a fallen tree. I held on and decided to risk it all, clamping down the drag and folding the rod into a full horseshoe to stop the powerful fish. Finally, it turned.

I caught a glimpse, a split-second glance at the widest back I’d ever seen on a pike, and then… my composure vanished. A wreck of nerves, I was genuinely anxious throughout the fight as the fish, now tiring, ploughed along the surface, lure nicked just in the corner of the mouth. What was probably 30 seconds felt like millennia as I fought one of the greatest fights of my life.

Finally, she hit the net! Working quickly, the hook had come loose. Weigh, photograph and rest. I watched as the beautiful leviathan swam gracefully back to the depths. We celebrated, cheered, laughed, and then I collapsed, overwhelmed by the catch of a lifetime… The story of my first lure-caught 30. 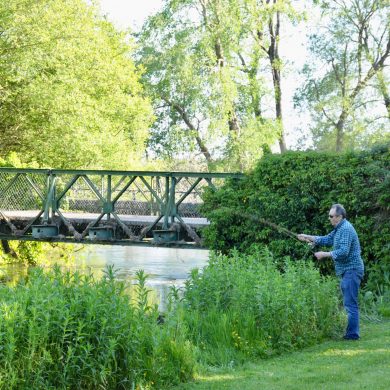