And there went March…. the browns, the funeral, the pomp, the circumstance, the ides n’all.

We are currently stuck on fast forward and the impending trout fishing season on the Dever is hurtling towards us at warp speed Captain.

Events get underway on the Itchen next week in anticipation of an early hatch of grannom of which there is currently no sign.

We are all up together at home and much has been achieved in these environs this winter but the time has run out for much needed rain and we must go with what we have got for the coming summer. So expect the river to be much diminished by August with bank side vegetation allowed to encroach on the river channel in order to squeeze the river and maintain a speedy flow as possible. Currently we play host to a handful of olives of an afternoon which inevitably draw the eye of the trout. The grayling are preoccupied with other things and some decidedly dark fish have begun there perennial flitting about on the shallows. Willows are waking up and we have ornamental cherry trees in blossom , mowers have been about their business and all manner of fowl are feeling frisky with the drakes, driven by seasonal urges, cranking up the brutality of their foreplay with each day.

Yes, spring is upon us and this week has seen the last campaign for the loyal orange saw as it signed off with “log week”

A concerted effort to achieve high reward in a short space of time. Ok, we’re not funding the purchase of a lifeboat or plunging wells into some parched corner of Africa, but there are log stores that must be replenished in order to keep three fires around here burning with seasoned logs throughout next winter and the one after. I once calculated that the wood burner in our home consumed between six and eight tonnes of wood each winter in order to maintain the flow of blood through our veins of an evening and warm a handful of radiators, the four hundred year old mill house has two open fires and little insulation. Logs have always been a big part of this job and you have to plan ahead with such things and as a result fallen timber is quickly fallen upon and is piled high throughout wood.

Wood that must be split. 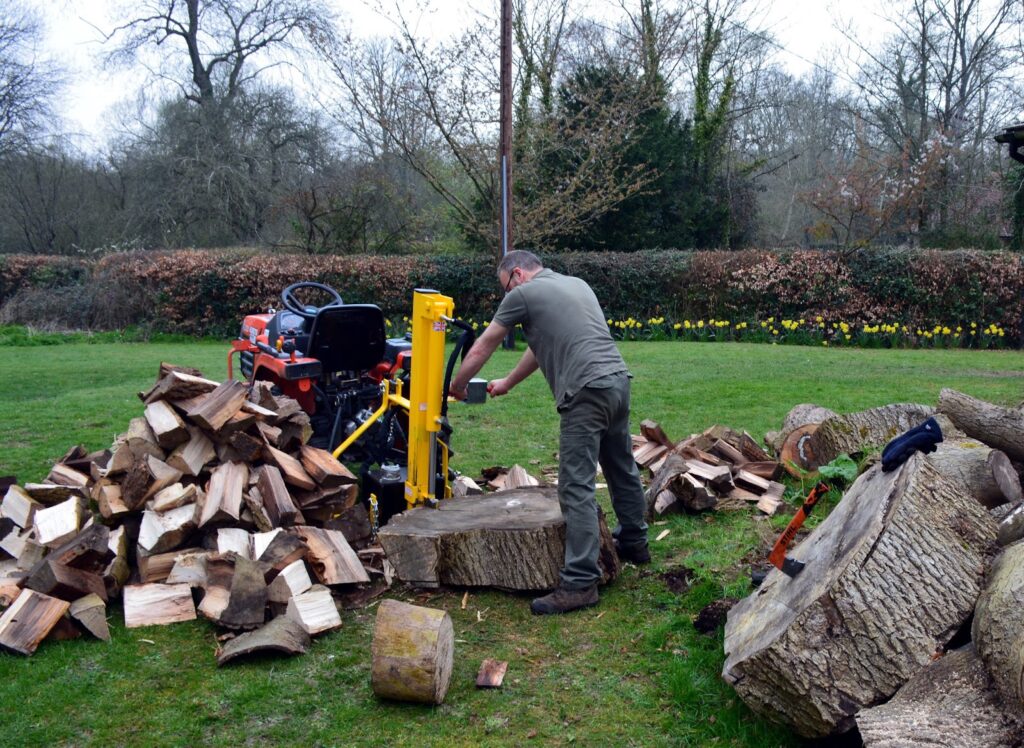 Jump back a thousand years or so and my physical bearing would single me out as an archer, not for my propensity to flick two fingers at certain aspects of the outside world but a certain stance and gait that these days can only be derived by chopping a large number of logs .

“My name is Chris de Cani and I am a Mesomorph”

There, I said it!

Swinging an axe, or hodging logs – a term derived from a three year old child B ( a fellow mesomorph who could also be mistaken for one who strings a bow) who would often ask in his formative years “is you hodging logs again Daddy?”

I am no longer a hodger of Logs.

While fishing with my employer and her family an hour north of Inverness on the Carron last year. Postprandial conversation turned to logs and my employer decreed that at my great age and in such poor condition I should no longer be heaving the hodge and a tractor mounted log splitter must be sourced in under order to aid the production of fire wood,

And here it is, 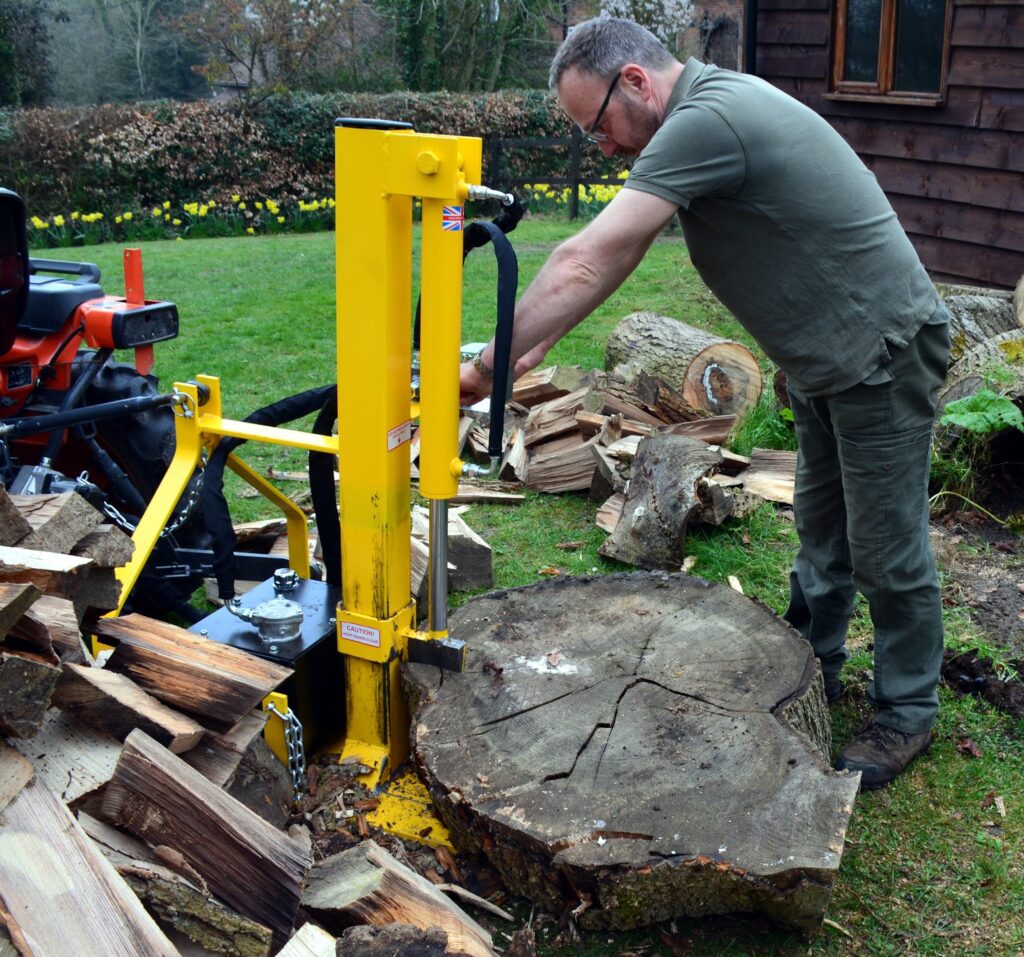 We’ve called the thing Clarissa in honour of one fat lady who haunted this place for many years and had a force of personality equal to the twelve tonnes offered by this magnificent machine.

All rings, be they ash, oak yew or thorn have yielded to its irrepressible force.

A whole week of busting wood has passed and the world’s best chooks now share their paddock with enough logs for the next winter and half the one that follows.

My spine is intact and my calluses few and after a few years I may once again resume my quest for the refined figure of a lancer or cavalryman, with the stoop of a foot soldier/hodger of logs a distant memory.

Here’s one of Lord Ludgershall using the thing to trim his toenails. 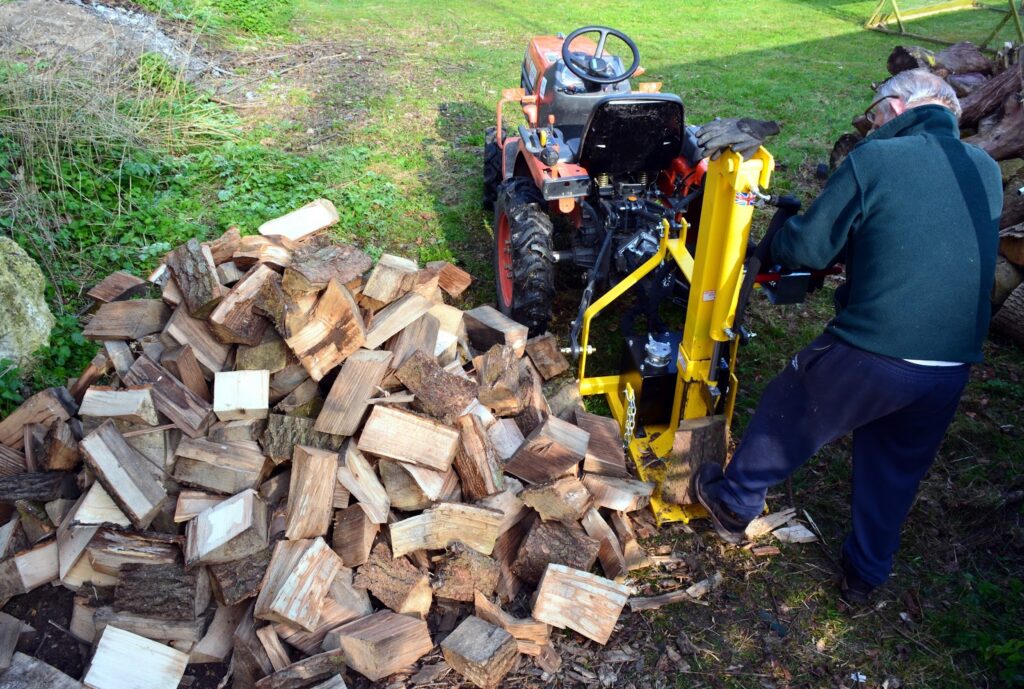 Just got to stack the things up now (the logs, not Lord Ludg’s toenails)

It’s a life changing purchase and one for which my forty nine year old spine and I are very grateful.

There is a bend on this stretch of river that is particularly productive when it comes to putting fish on the bank, be they coarse or game. It lies a few yards downstream from a small weir that disappears during times of verdant weed growth. Above the weir for a hundred yards or so the river falls away quite dramatically for a gentile chalk stream.

And at this point I could go on at length about decades of muddled thinking with regard to Fishery Management.

Last month our weir failed, and with an open mind and other tasks to undertake I removed the thing and in a clumsy attempt at science, monitored the situation.

Within a few days the roach had relocated to a location that demanded less vigorous fin work, and with an inch or two less water flowing over the shallows above the weir the grayling sought spawning gravels elsewhere.

I get the perched stream argument with regard to clean gravels and ranunculus and yes, some in stream obstructions need hauling out, but there is also merit in delaying the entrance of run off after rain in a chalk river valley. The notion that all weirs, hatches and sluices are the spawn of kelpies and nuggles is nuts. Assess each in-stream obstruction individually work out what it can and can’t do and operate it or remove it in a manner that is sympathetic to both flood defence and the aquatic environment.

Madam and myself have just returned from further rambles in the quest for eternal life and this week saw us bisect the Test Valley, climb a hill, get lost in a field of grass before bumbling about in the valley of the Anton in search of our car. I’ve fished a few times on the Anton and the lower river runs through a magnificent meadow that in this month many years ago would have lain underwater. The hatches and sluices to facilitate this still lie high and dry mid meadow and serve as a monument to the well of lost knowledge on how to manage and move water in a chalk river valley. 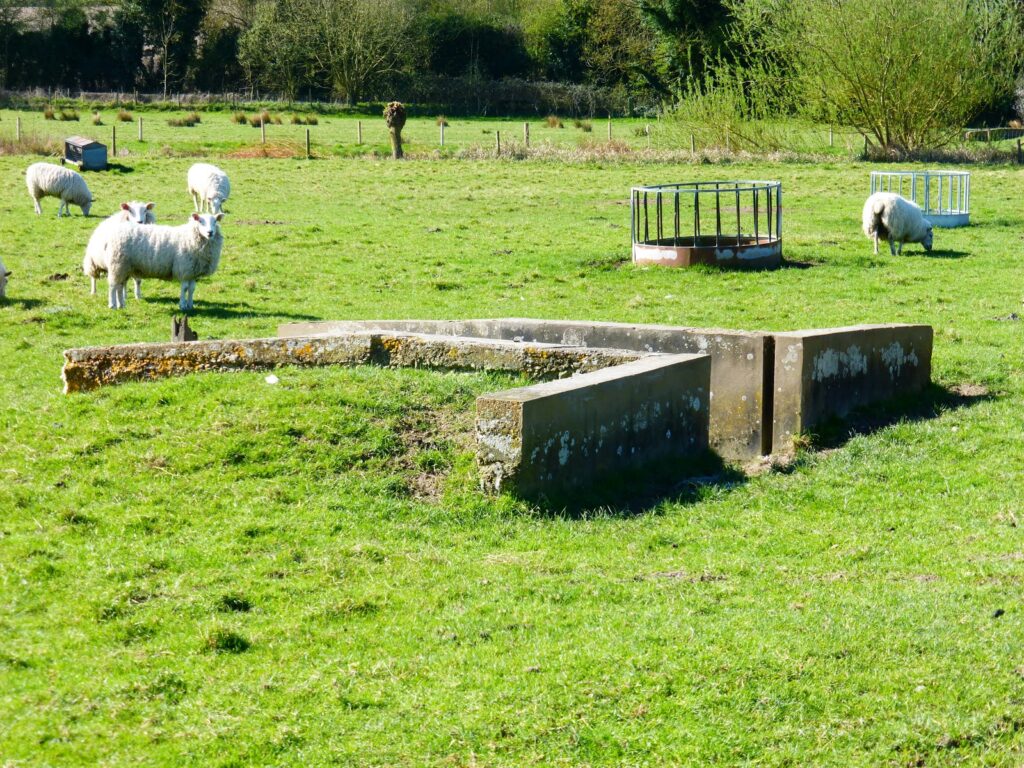 “The weir that Wickes built” on the Itchen during the flooding of 2013/14 is a prime example when a set of hatches could have come in handy and during a recent discussion with big noises from the EA the subject came up and I commented that ” you’d have loved set of hatches under that bridge wouldn’t you? 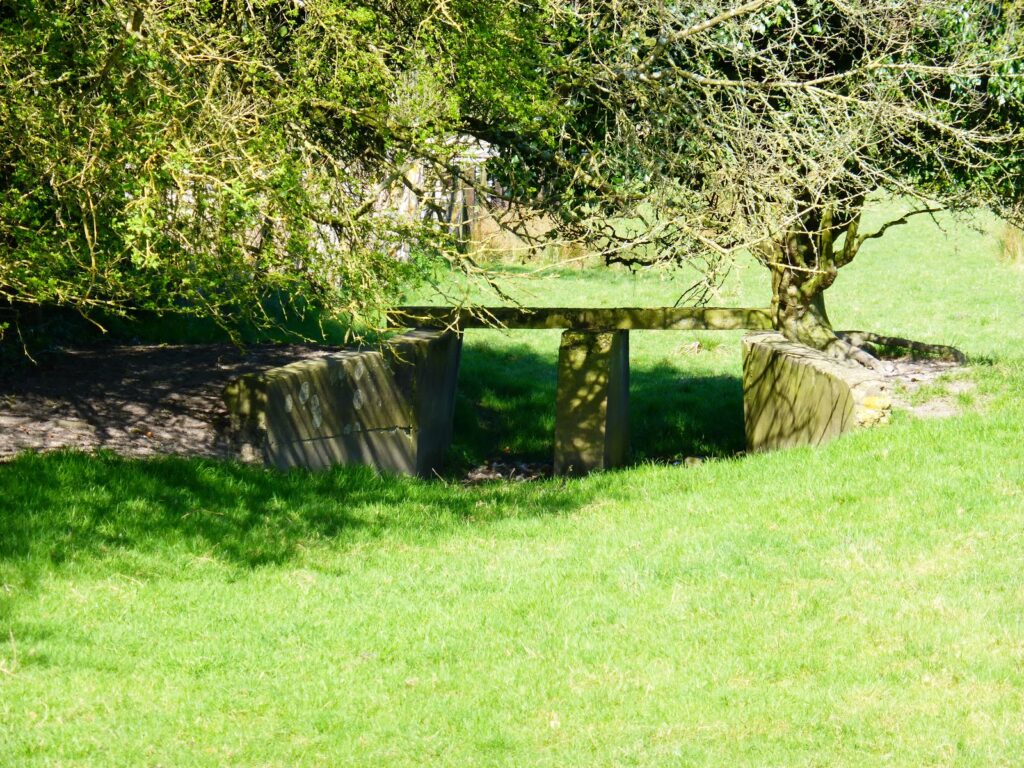 They agreed, but the general tone from any “expert” parachuted in to consult/advice is to rip out any in stream structure

Unfortunately many of these methods of flooding meadows are no longer relevant in this age as the amount of water flowing though southern chalk rivers is much diminished, if the desire was there it is questionable if there is enough water to run the things today. 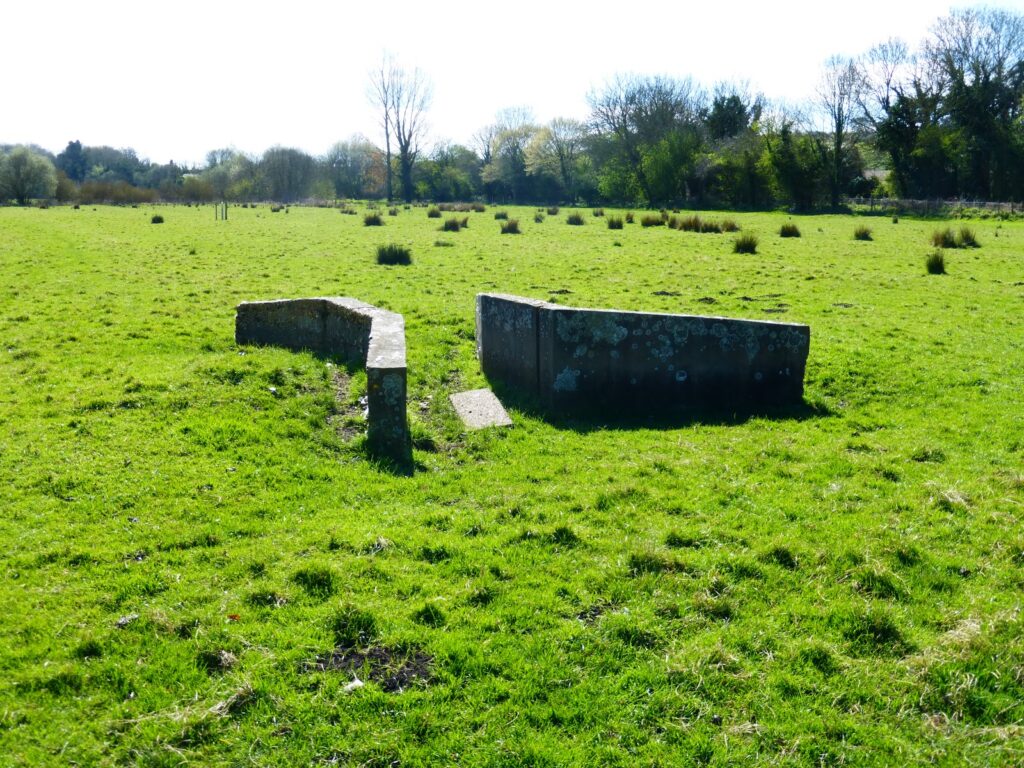 Madam and myself popped up to Basingstoke to see Prodnose midweek.

On an extended tour, he took the stage at seven thirty and departed at just gone eleven with only a brief pause for pints.

I’ll have to declare an interest here as since Tel shuffled off he’s my broadcaster of first choice, and I’ll own that I’ve cropped up a few times as a “chiefly yourselves” with contributions during the past few years, although following John McGovern singing Whole Lotta Rosie in the manner of Brian Clough was a tough gig.

Forget the Daz, and also Pets wins Prizes (Dale Winton took it to another plane)

He’s a lyrical force of nature and the show is the stuff of Vaudeville. High kicking full on entertainment from one with a large and varied canon. 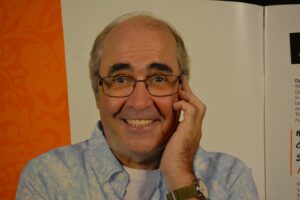 He’s added a few dates to his tour and if you get the chance to go don’t pass it up.

A few week’s remain of titivation and buffing up about the place before artificial flies start falling on the water. Most of the regular rods are rolling up for lunch this weekend, when I will be required to account for my movements throughout the winter months. It’s always a fun day and I can guarantee that during our post lunch walk up the river somebody will remark that I have removed too many branches but by June the view will have changed to “you could have taken a bit more off that tree that I keep catching my fly on.” It’s a great time of year and the metamorphosis that occurs in this valley at this time each year never ceases to amaze. 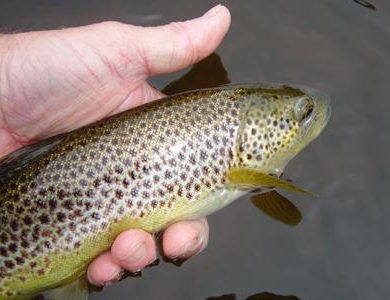 Fishing on the Frontier – Part 48: Euro-Style; A New Boundary State
This website uses cookies to improve your experience. We'll assume you're ok with this, but you can opt-out if you wish.Accept Reject Read More
Cookies Policy