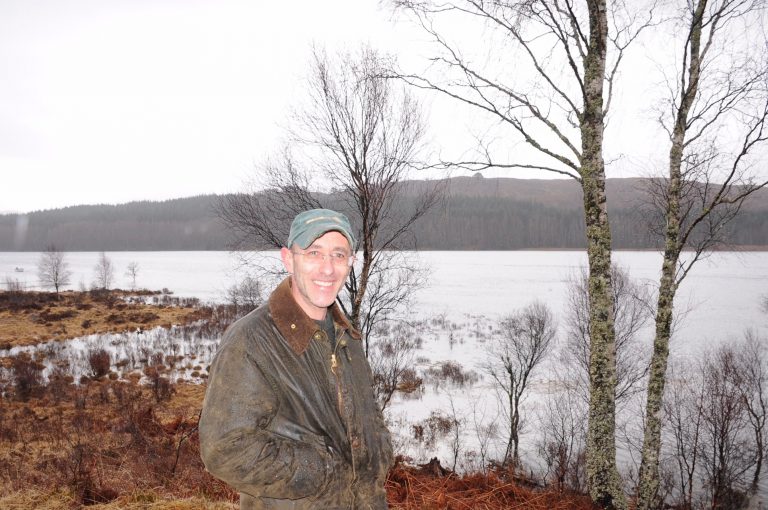 As some of you may know, I returned to the River Garry after a gap of around twenty years. Now, this particular Garry isn’t the mightiest of rivers in terms of length, largely because it has two whacking hydro dams near its source, and towards its mouth into Loch Oich on the Great Glen. Some of you might know the last few miles of its course as a salmon river, and it was beloved by that great salmon man and actor Geoffrey Palmer, a gentleman much missed by everyone in the sport. But I digress.

Glen Garry was virtually my home between 1987 and around 1998. The legendary Tomdoun Hotel was the focus of huge fishing effort at that time and the host, Gordon Heath, ensured the anglers could recount their triumphs each and every night ’till dawn if they cared to. When my money ran out, I’d rent Gordon’s so-called bothy from him at 50p per week, with a gas canister thrown into the deal. As I have said already, he still took all my cash over the bar, or as boat charges, throughout the season.

Why Glen Garry and why the Tomdoun? There are brief moments in angling history where worlds collide and something fascinating emerges. During that brief period, several anglers, myself included, made Tomdoun our base for ferox expeditions on lochs such as Quoich, Poulary, Inchlaggan, Arkaig and Cluanie, all clustered within striking distance of Gordon’s whisky collection. John Hett, John MacDonald, Bobby Tarr, Roger Miller, Dennis and Norrie, and members of the Ferox 85 group were some of the habitués of a decade which I at least remember with both fascination and affection.

This piece is also timely because it follows a long-running discussion on these sites regarding the whole question of brown trout and their DNA. During that time, the question of ferox trout has been raised repeatedly, and I suspect this so-called sub-species exerts some hold over many of us. I had not expected to find myself in ferox thrall again in my life. The great carp angler Chris Yates described my affliction as “feroxide” at the time, but I had largely cured myself of it by the turn of this century, largely because I had turned my energies to equally mystical beasts like taimen. It was therefore, with some trepidation I found myself on a work visit to Glen Garry and the relatively far North. Many of you in the know, as it were, will be aware of my reasons for being there, but which I cannot really disclose at this moment in time. Suffice to say that, despite ferocious weather and disappointment at some of the out-of-place development in this hauntingly beautiful place, I was absorbed by my trip.

Most of this is down to meeting Mark Lloyd, a resident fishing guide in the Glen. Now, can I say from the outset to those of you who smell a financial rat at every twist and turn, no money has changed hands here. Also, if you go on Mark’s website, which is revelatory, you’ll see his charges are giveaway, because he is a man with a burning passion he wants to share. Loch Garry Fishing is what you must tap in, and if you do so, and if you have any interest in ferox trout, you will be amazed. So you should be. If we go back to those Tomdoun ferox years, I’ll be brutally honest and say that our combined successes were pretty meagre, and any ferox was treated like the Second Coming. I can remember a handful from the Garry, and the lochs along it, and a few from Arkaig, but that is about it. The point about Mark is that he catches far more ferox now than we dreamed of catching then. Meeting him was a rekindling of my young passions.

Mark, it seemed to me, is an intense, driven, passionate guy. I have already mentioned his unworldly rates, because I feel money comes a poor second to fish, fishing, and the course of the river. We met first in his boat-shed as the rain thrashed down, and we talked and talked – largely ferox talk. And what was wonderful for me was that we agreed on all the big controversial points of the ferox art, and the experiences I had gleaned in the last years of my “feroxide” Mark did nothing to contradict. Let’s look at the big points, lessons that I think truly make ferox fishing a much more reasonable proposition than it was forty years back.

Firstly, are these big browns ferox at all, or simply predatorial fish that grow abnormally big on a diet of fish rather than insects? I don’t want to get into genetics once again, but Mark has sent several scale samples to the experts at Pitlochry and the fish laboratory there, and he has his doubts. I personally do not. I was raised on the science that said ferox have a different lifestyle and differing growth patterns, and have evolved to be different over 12,000 years or so. Does it matter? These are enormous, mind-blowing fish wherever they come from, so let’s move on.

When I started out on my ferox career, there was little written about them, apart from what the Victorians had passed down, notably on the weather. I think, without checking though, it was Charles St. John who told us that we should hope for ferox in vile weather and to chose “the roughest water your boat can live in”. Or something like that. Taking Charles’ advice, I fished in some real hoolies, caught nothing, and nearly drowned myself on occasion too. Then I found, late in my career, that hot, still, bright days were way the best. Mark agreed with me absolutely, and if you do look at his photos of mammoth browns, you’ll see the majority came on days of unbroken sun and no wind, the sort of conditions we are supposed to despair of when fishing the fly on the lochs for “normal” browns. This “fact”, if I may be so bold, makes ferox fishing more pleasant at a single stroke, even if it is hard to explain. (I don’t quite have the space here to try!)

Moreover, on these days, black is the big colour for any ferox man, whether fishing lure or, like Mark, the fly. Here is another thing that makes me look at Mark with awe. We largely failed on Glen Garry, and we were using every plug and spinner in the book. Mark largely succeeds on these very same waters by using the fly. He is specific. The gorgeous April Vokey is his muse, and her black Intruder patterns are what he catches most of his fish on. His gear would be a 10ft seven weight outfit only, using a sink tip. I haven’t seen the maestro in action, but more of that later.

The fly works because of another extremely important lesson both Mark and I agree on. The Victorians had it that ferox lived, hunted and fed where the char live, down deep. Balderdash. What Mark and I now “know” is that ferox do most of what they do in five to fifteen feet of water, and this makes fly fishing a sensible option. I know this because I spent six weeks in the later Nineties being paid by a rich Dutchman to catch and radio tag ferox trout on his private loch. I guess Mark knows it because he catches loads of ferox in the surface layers!

ALWAYS ON THE FIN

I learned another thing during my tagging life. We used to believe, my fellow feroxers and I, that these big trout hung around features, waiting to pounce on passing char, rather like a pike would do. No. Tagged ferox show that they are always on the fin, drifting on the currents presumably, and covering endless miles in a day. One tagged ferox, named Dennis Law by the way, travelled six miles in a single, eight-hour day. Mark knows it because he caught a ferox at the head of one of the lochs, and his mate caught the same fish five miles away the day after. So, to a degree, you just need to cover the water, rather than looking for answers in structure and so on.

There’s very much more to be said about this whole subject, and about Mark himself. For example, I very much love his attention to the minutest detail, and especially his superb ideas on fish care. The good news is this: I am going back in three weeks on a second “work trip”. (Again, some will know the ins and outs.) If there is an appetite, I’ll put together Part 2 on this extraordinary species and fascinating guy. Indeed, you might go on his website and book him yourself. Catch or not, I can guarantee the richness of the experience.