Fisheries are worth an estimated £150m to the Welsh economy each year and support around 1,500 jobs, therefore, it is important to protect them.

The continuing fall in the number of salmon and sea trout in Welsh rivers has meant stocks have reached unprecedented lows in recent years and now threatens the future of many fisheries.

In order to tackle this decline, Natural Resources Wales (NRW) is considering several actions which will help reverse the trend and ensure both iconic species continue to play a vital role in our environment and culture.

“The decline in number of salmon and sea trout migrating back into most of our rivers is now so serious that we need to give more adult fish the chance to spawn if we are to ensure the survival of the species in Welsh waters.

“We have already asked anglers and netsmen to voluntarily release the salmon they catch and we feel it’s time to introduce further controls on fishing for salmon and sea trout.

“We have been discussing how fish stocks can be improved with Local Fisheries Groups (LFGs) across the country for more than 18 months and we are now keen to find out what the wider public thinks.

“A briefing setting out the current issues around the status of our salmon and sea trout stocks in Wales and the likely need in future for new controls on catches by both net and rod fisheries, as well as information on how you can have your say can be found on our website naturalresources.wales/catchcontrols2017.”

In addition measures to ensure released fish have the best chance of survival, including the use of barbless hooks, a ban on treble hooks and use of bait, are also being considered.

The new byelaws would be in place for 10 years, with a comprehensive review into their effectiveness after five years.

NRW believes that these steps are vital after assessments for 2016 continued to show that 21 of the 23 salmon rivers are failing to reach their management target and are either ‘at risk’ or ‘probably at risk’.

For sea trout two thirds (21 of the 33) of rivers assessed are vulnerable and require additional protection.

“After carefully considering the wide ranging views and evidence, we have come to the conclusion that we cannot continue to take salmon while stocks are in such a perilous state

“We have not taken the decision to call for these changes lightly and we realise that these measures on their own will not resolve the complex issue of declining salmon stocks.

“We want to work with the angling and net fishing communities to protect our fish and fisheries for future generations to enjoy and the introduction of new controls will be a positive step in helping protect stock.”

>> If you fish in Wales then follow the link to read up on the issues and to have your say on the new proposals at naturalresources.wales/catchcontrols2017 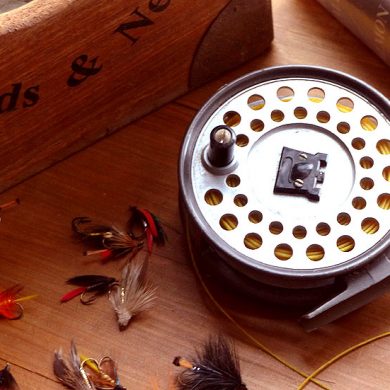 The ‘Reel’ Sound of Music – Fly Reels Compared
This website uses cookies to improve your experience. We'll assume you're ok with this, but you can opt-out if you wish.Accept Reject Read More
Cookies Policy