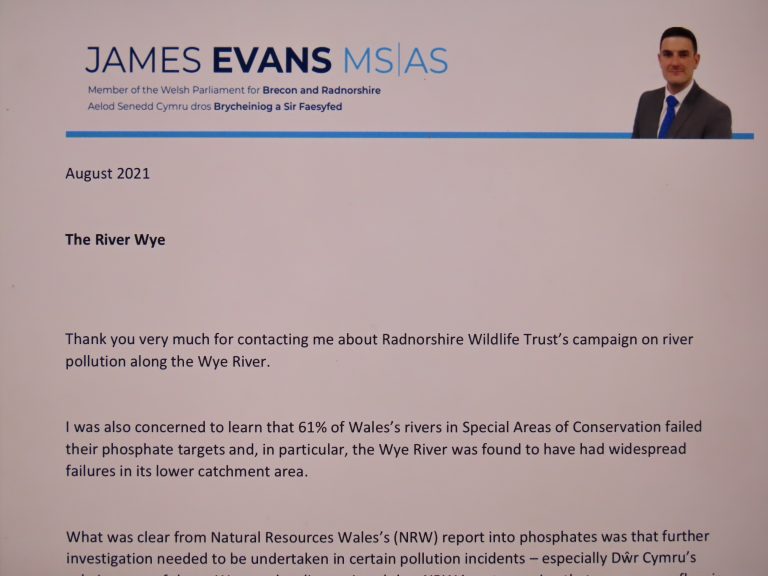 Passion for… A Cleaned Up Wye

As we have written before, simply because the hot weather has receded that does not mean that all is well with the Wye, and that the protests over its horrendous treatment will subside. In fact, the opposite is happening. Our inbox is full of outraged mails on a daily basis, and two items have recently stood out.

One is a letter that has been widely circulated, from James Evans, Member of The Welsh Parliament for Brecon and Radnorshire. We have highlighted points from the letter that should interest us all…

“What was clear from Natural Resources Wales’s (NRW) report into phosphates was that further investigation was needed.” (How much investigation is still needed when so much work has already been done, and the visible evidence is incontrovertible?)

“Regarding the claims about poultry units being behind the pollution incidents along the Wye, I note NRW’s investigation found that the overall pattern of failures in the Wye did not support the argument that poultry units are the main reason for nutrient failures on the Wye.” (Does anyone with any knowledge of the present situation agree with this?)

“Welsh Conservatives believe that a holistic solution is needed to restore river beds, rather than adopting stringent phosphate targets.” (ie, another way of saying ‘we’ll kick the proverbial can along the road and do nothing’.)

“Welsh Conservatives feel that the failure to secure our long term food security will cost future generations dearly… which is why food self sufficiency should be prioritised.” (So, screw the environment and stuff the need for pure rivers. If supermarkets can sell chickens for a quid or two, everyone is happy in a collapsed world.)

The Wye & Usk Foundation recently called for a meeting of fifty Herefordshire farmers, and there seems to have been some acceptance of the poultry problem. Chair Kate Speke-Adams, WUF Head of Land Use, summed up the conclusions…

WUF’s report ending by using phrases like this “takes time”, ”no quick, easy solution”, and “high levels of phosphorus will take decades to run down”.

And yet the report was written with a measure of bright optimism, a spin on events we fail to understand. Whilst we have a high regard for some in WUF, the basic argument of all this is that someone sometime will be paid by someone sometime to look into what is destroying our most iconic river… but we won’t do anything with much urgency because it’s probably too late anyway. Or perhaps it is more a case of ‘let’s be seen to be talking about this and with luck, the whole problem will go away’?

Just tell us please, are you happy with this? Because we are not, not by a long chalk. Can we all please decide on how we proceed from this point, and what action as a group we can all take to effect change NOW?