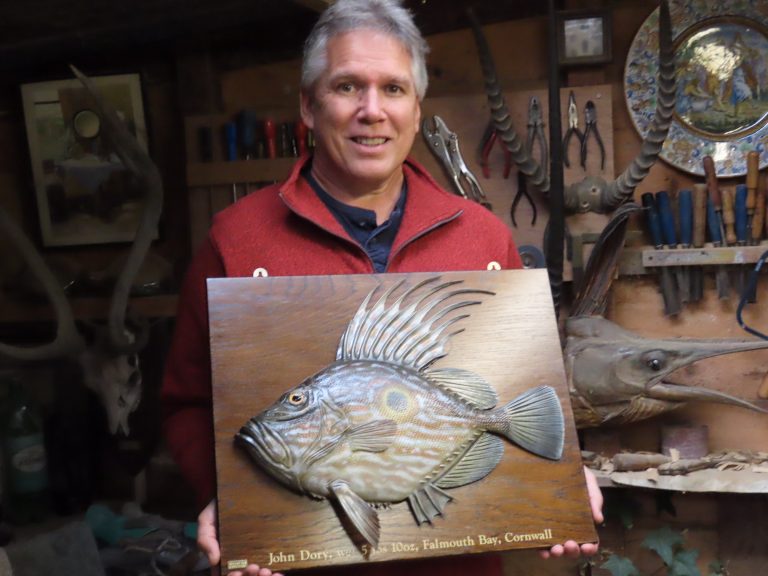 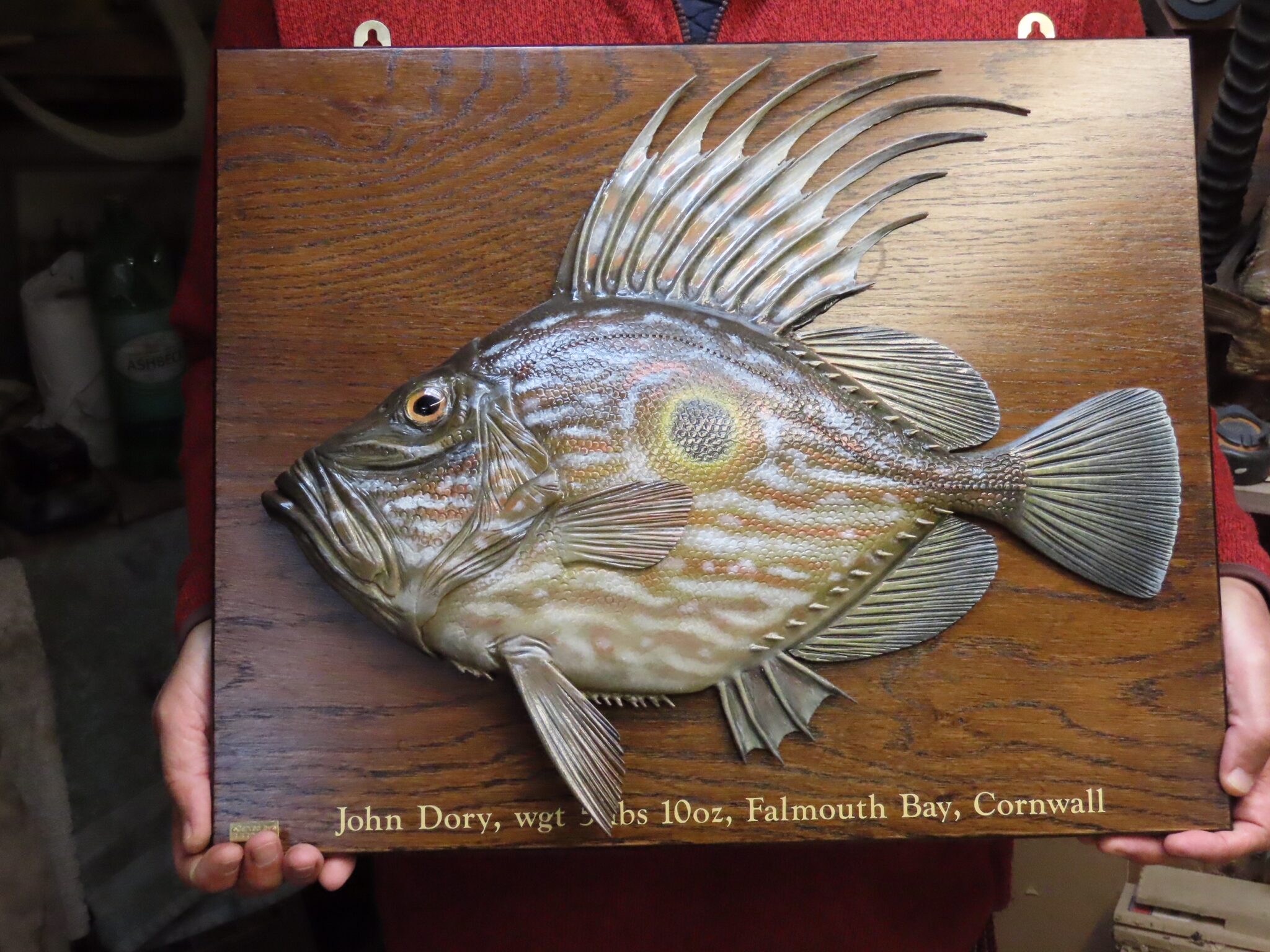 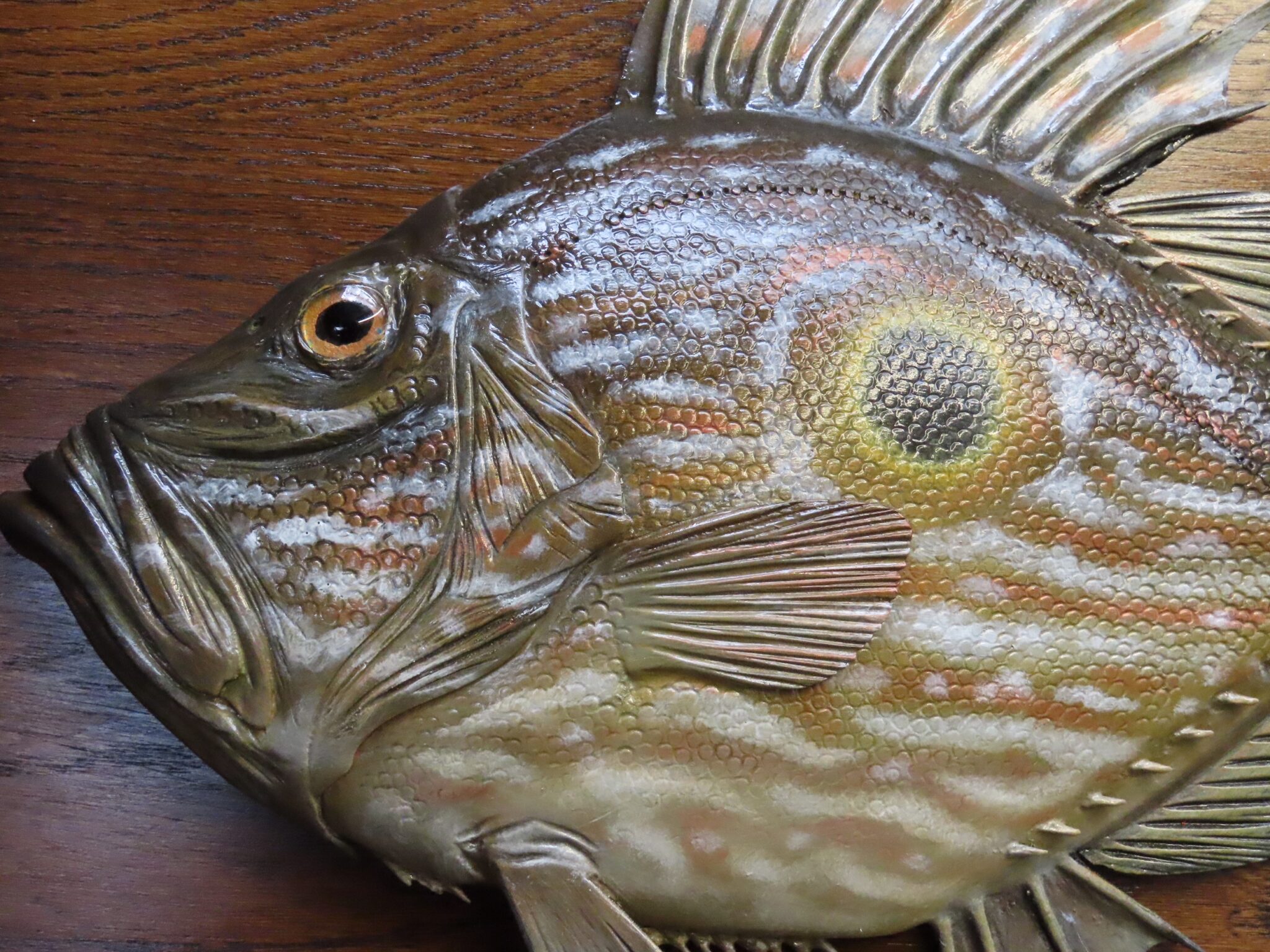 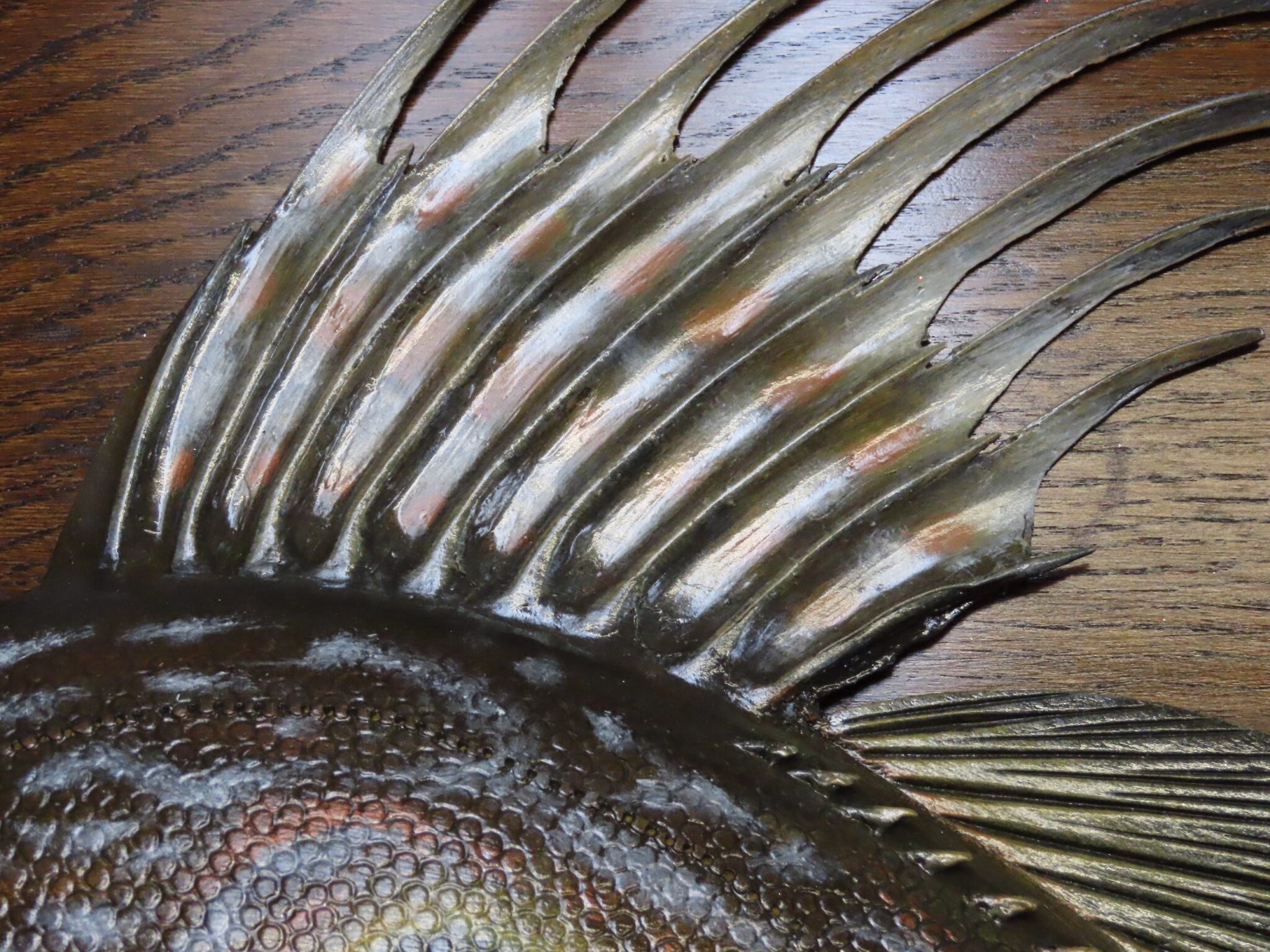 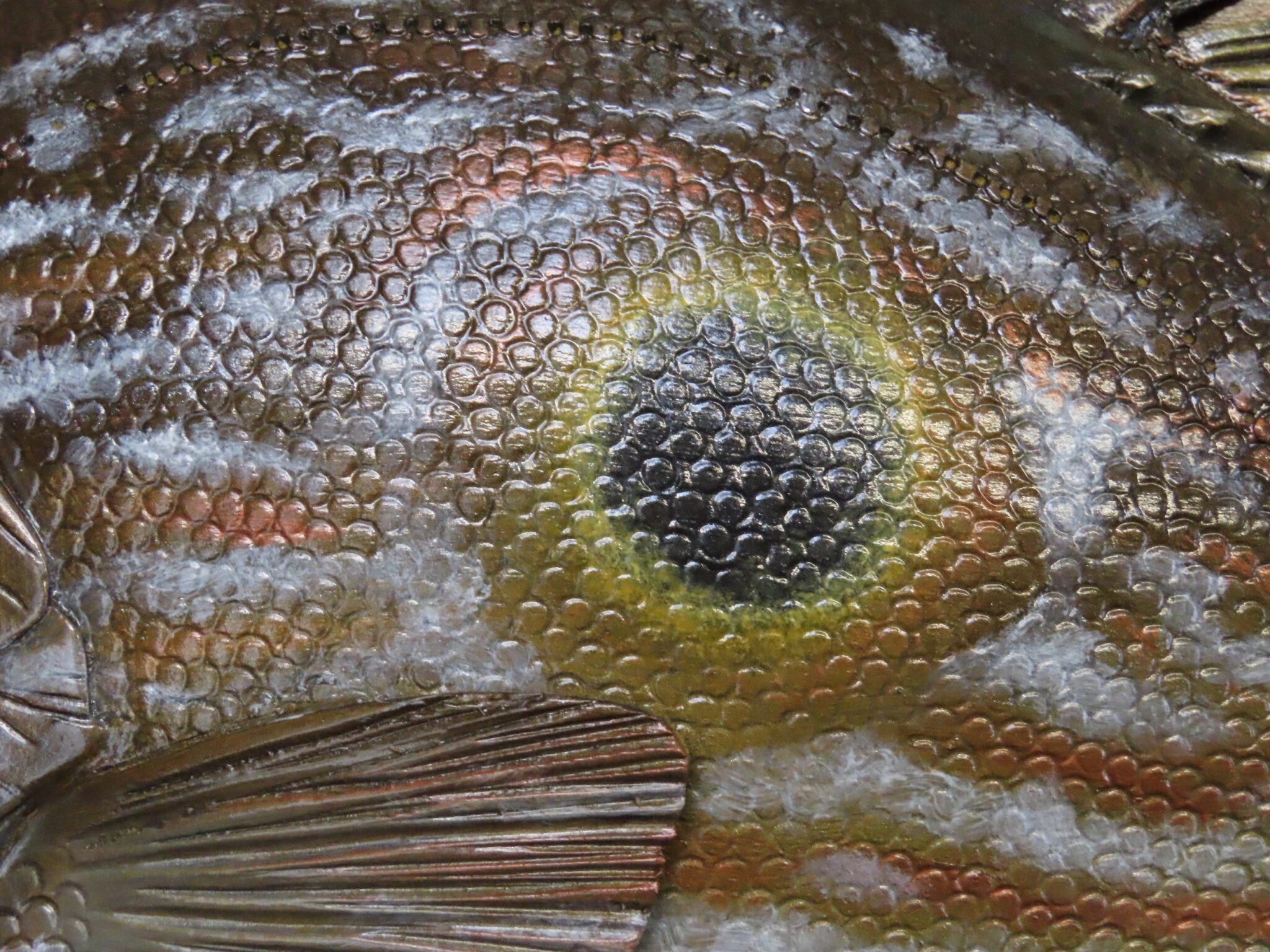 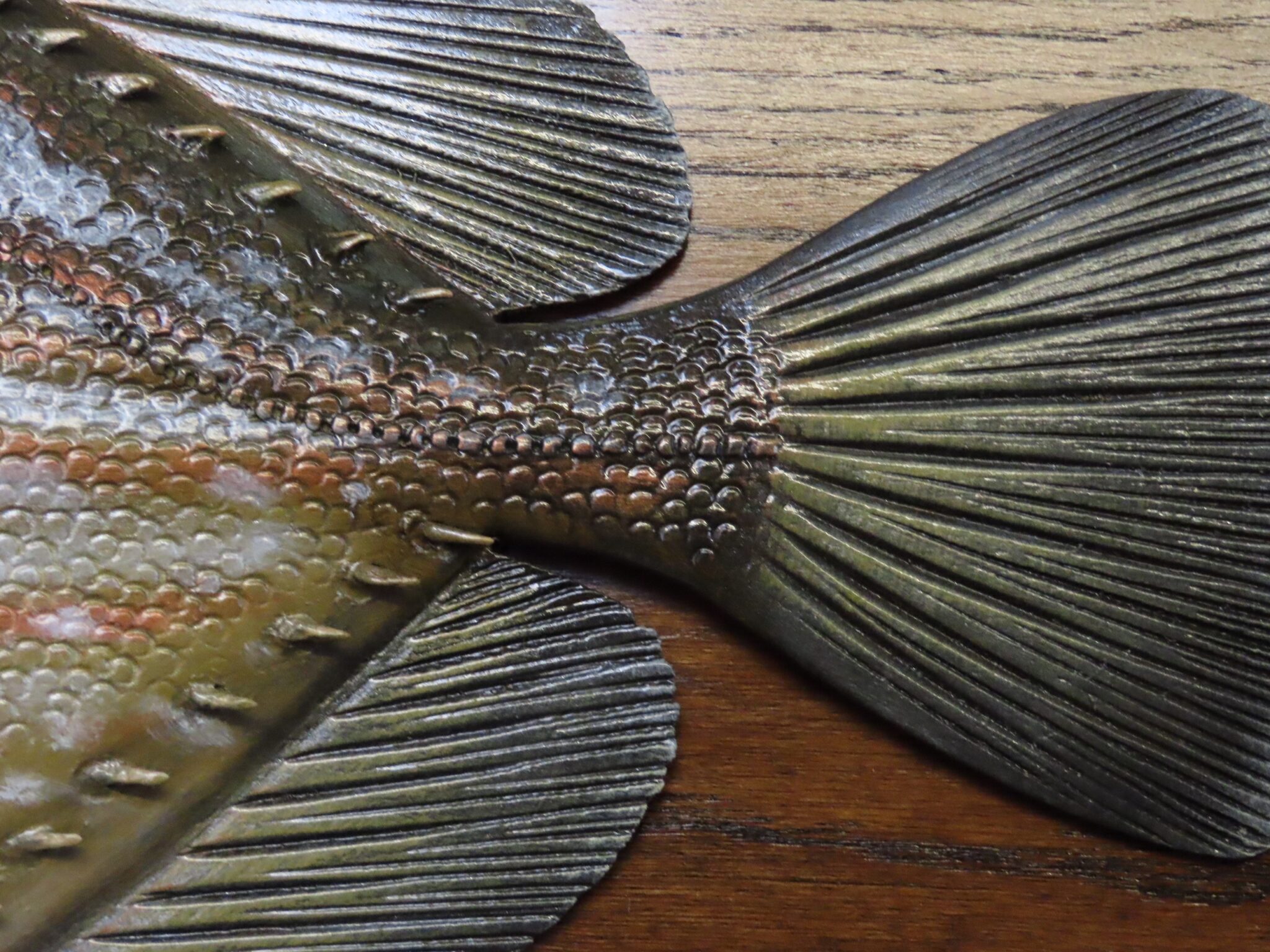 The heyday of the carved fish, generally Atlantic salmon, ran from the later Victorian period until World War II. In part, this was because large salmon secrete a great deal of oil, which makes normal taxidermy a hard task.

This was no loss, as the best examples of the genre were finely worked and beautifully and realistically painted. They were copied from the actual fish itself, with remarkable accuracy and art, which really did mirror life itself.

Many of the big firms offered the service, including Hardy and Farlows, and research some years ago by Simon and Edwina Brett suggested that the greatest carved creations came from the studio of John Russell (1819-93), his daughter Isabella (1864-1950), and her husband John Tully (1862-1913).

One of the prime patrons of this art form was the Duke of Richmond and Gordon, who fished the Spey each autumn. Leviathans over forty pounds were immortalised in wood and swam eternally (he hoped) on the walls of the Duke’s smoking room at his Scottish seat.

That shoal of wooden monsters has long since dispersed, but the art form continues, thanks to the extraordinary skill of one man. Roger Brookes works out of Kingsland in North Herefordshire, and it seems gently fitting that such loveliness should emanate from a sleepy black and white village like this.

Roger is in his sixties, just, but hardly looks it, perhaps because he seems the epitome of the happy man. Happy with his family, his environment, and the legendary body of work that has supported his lifestyle these many years. He’s more at ease with his art today, he says.

He used to fret, each fish a birthing, with all the attendant pains and pleasures, but now he is more relaxed, taking on fewer commissions, and following his own wishes more. And it all begins with the fish for Roger.

As a boy, Roger was  transported by the liquid beauty of fish he saw and caught, and it is this fascination that has guided his life, ever since he left a job working in the offices of the Burton Group, off Oxford Circus. Roger was never happy as, or in, a suit, and when a property-developing mate dropped him an envelope full of money, the die was cast.

He got himself to a library, taught himself how to stuff fish, and never looked back – though his first attempt on a whiting bought from an East End fishmongers looked like it was full of old socks.

Soon he was working on trout, salmon, beloved goldfish, and even a piranha that proved to be an expired 18th birthday present. He met his wife Annie and they moved the taxidermy business to Herefordshire where they have been based since.

The transition from stuffing to carving came when an elderly gentleman entered the workshop brandishing an equally ancient Brownie camera. An antiquated snap showed the gentleman as a boy holding his first, most prized salmon. “Can you recreate my fish,” Roger was asked? With absolutely no background as a wood worker, Roger tried and the rest is history… and so by sheer chance a life is transformed!

Roger is happy to admit that his carvings have found a fertile market, those wealthy anglers who want to immortalise their finest fish, their happiest moments. He has carved for bankers, lawyers, oligarchs, billionaires and rock stars, from the sublime (Clapton) to… Robson Green.

Roger is quick to thank Tarquin Millington-Drake for his endless help on the journey, as well as every one of his customers, who have shown patience and forbearance during the weeks and months of waiting.

Right now, in his studio, Roger is working on a German huchen (a landlocked salmon that was introduced into the Thames in the Victorian period and briefly flourished) surprisingly caught in the middle of Munich itself.

This thirty-odd pound giant is only one of many exotic commissions. Stand outs include mahseer from North and South India, Nile perch, and sea trout from the Falklands. We have seen a crucian carp even, along with a great crested newt coiled around it – the two survivors found when a Norfolk pond was drained!

Roger uses wood from the jelutong tree, found in South East Asia, and tapped for latex as well as felled for timber. Roger has found this to be a stable, hard wood, easy to carve, finish off and paint. (The wood is used by many of the US decoy carvers today.)

To create a carving, Roger needs photographs and exact measurements. These allow him to make a portrait, getting the head, the belly, the shoulders, and the fins of the fish perfectly represented.

During the carving stage, Roger says he engages his sculptor’s brain, and fashioning the scales can take four days or more, depending on their size and complexity. Once fully carved, the fish is undercoated to seal the wood’s grain, and to give Roger a base to start painting. Now that ‘Sculptor Brain’ morphs into ‘Painter Brain’ as the wooden shape begins to transform into the living fish, as nearly as man can make it.

When all is done, the fish is fixed to its oak board, and the writing and small golden badge are added. A label is attached to the back of the carving with a number on it, a number that is entered into Roger’s magic book, recording the captor’s name and the fish’s details. A fish and its history are both immortalised in this great story.

A lovely, talented man. Beautiful fish preserved for posterity. Fish that can be remembered down to every last scale and fin ray, but can still be caught and released with no harm done. Lucky are those who have a Brookes carving on their wall, and happy are we that many more masterpieces will swim from the great man’s studio in the years to come.

You can see more of Roger’s work at his website: http://www.rogerbrookes.com

Start typing to see results or hit ESC to close
salmon fly fishing River Wye conservation grayling
See all results
More Stories
British And French Scientists Unite To Save Atlantic Salmon
This website uses cookies to improve your experience. We'll assume you're ok with this, but you can opt-out if you wish.Accept Reject Read More
Cookies Policy