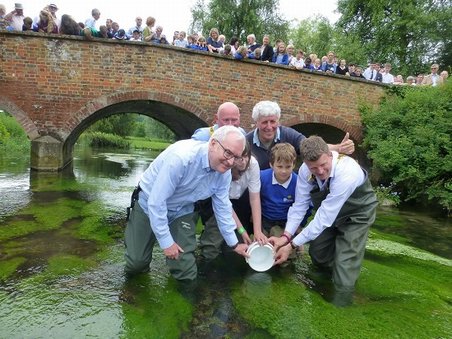 The Angling Trust joined Action for the River Kennet (ARK), WWF and the Environment Agency to celebrate the completion of a £30 million project to reduce abstraction levels from the famous Wiltshire and Berkshire chalk stream.

The event, held at Mildenhall near Marlborough, was to formally mark the commissioning of Thames Water’s new Axford pipeline, running 18 kilometres from the company’s Blunsdon reservoir north of Swindon, to Whitefield reservoir to the south-east of the town.

The pipeline will see a  7 million litre per day reduction in water being abstracted by the water company – protecting the River Og and the River Kennet downstream of Marlborough during periods of dry weather.

The project followed years of lobbying against excessive water abstraction from the Upper Kennet, by angling and conservation groups backed by local MP and Angling Trust Ambassador Richard Benyon.

The Angling Trust, the Environment Agency and Action for the River Kennet (ARK) have long claimed that water removed at Axford and Ogbourne treatment works, and not returned to the Kennet, has had a detrimental impact on the river, which is listed as a Site of Special Scientific Interest (SSSI) and is one of England’s best known chalk stream fisheries.

Martin Salter, National Campaigns Coordinator for the Angling Trust, who has fished the Kennet since childhood said: “The Kennet is an iconic English chalk stream which has sadly declined as a fishery, particularly in the lower reaches.

“It has suffered from the reopening of the Kennet and Avon canal in the 90s which resulted in the siltation of many of the vital gravel spawning areas and from low summer flows caused by over abstraction in the upper river.

“The Angling Trust has been lobbying for the Axford pipeline to be built to restore the summer flows to benefit fish and other wildlife in the river as a whole.”

ARK Director, Charlotte Hitchmough, said: “We’re delighted this new pipeline will protect the little River Og and the River Kennet downstream from Marlborough during low flows. Chalk streams are unique and important habitats and ARK has campaigned for 27 years to reduce the amount of water exported from these rivers.

“The pipeline is very welcome and we congratulate Thames Water and the Environment Agency for making it possible. We look forward to working with them to ensure a sustainable future for our rivers.”

The pipeline, which saw engineers cross both the Great Western mainline and the M4, will see Ogbourne water treatment works replaced with a booster station, with another station constructed at Whitefield reservoir. Swindon’s water supply will now be supported by both Blunsdon and Farmoor reservoirs, via the pipeline.

The event was attended by local school children from Long Lane Primary in Reading, St John’s Marlborough, Marlborough College and Ramsbury Primary School. All the students are working with ARK to improve the water environment and they helped ARK Chairman Richard Clark, Thames Water’s CEO Steve Robertson, Richard Benyon MP and Martin Salter to release some elvers back into the river to mark the occasion.

Start typing to see results or hit ESC to close
salmon fly fishing chub roach pike
See all results
More Stories
66 Salmon Per Rod for the Ponoi
This website uses cookies to improve your experience. We'll assume you're ok with this, but you can opt-out if you wish.Accept Reject Read More
Cookies Policy