This is probably long overdue given all the movies featuring trout, pike, bonefish and various other species, but the Atlantic Salmon, glamour species extraordinaire for some reason managed to escape the limelight on the whole until recently when a small flood of titles have been released as completed works or teasers of those coming soon.

This recent trend seemed to start with this critically-acclaimed film chronicling the extraordinary work of Peter C. Power and the Atlantic Salmon Reserve in Russia in protecting the Kharlovka river and the surrounding 5 million acres of Arctic tundra with its endemic salmon runs and other wildlife.

To obtain a free copy of the “Home for Salmon” DVD please send a brief message to info@kharlovka.com and they will post it to you at the address you provide. Alternatively you can purchase the excellent Atlantic Salmon Magic by Topher Browne, or buy the Limited Edition and a donation will be made to Atlantic Salmon charities and the DVD is included for free also with both editions.

Next up is A Passion Called Salmon by Sasa Savic – a celebration of the magnificent Atlantic salmon and those who both fish for it and fight to conserve the wild stocks.

A Passion Called Salmon is a film centred around the key issues related to salmon survival. During the last two years, angler Sasa Savic has travelled to the key salmon regions throughout the North Atlantic range and to several famous salmon rivers of the world and documented his personal fishing experience and experiences of the people like him in love with these remote rivers and trophy salmon. This film benefits the North Atlantic Salmon Fund (NASF).

Gaula – River of Silver and Gold

This movie from Daniel Göz and Anton Hamacher is set to make jaws drop as they claim “this is the technically most advanced flyfishing film to date, an outstanding cinematographic documentary on one of the last wild salmon rivers of Europe.” It’s hard to disagree when you see the trailer below!

Fish&Fly Features Editor – Henry Giles had this to say recently – “here is a cinematic celebration of flyfishing on the Gaula but with multi-award-winning Daniel Göz on the first (and underwater) cameras, a man who shares weeks of the rest of his year with BBC/Animal Planet, you are in for such treats as soaring (and edge-of-the-seat low-level) aerial views and spectacular underwater footage of spawning salmon.” Click here for his full review.

A slight variation on the theme now is this recent release in that its subject matter focuses on the experience of staying and fishing at one of the most famous Atlantic Salmon fishing lodges on the planet – Ryabaga Lodge on the Ponoi river in Russia.

The Ryabaga Camp on the Ponoi River epitomizes all that we love about a remote fishing experience: the excitement of a true wilderness location yet an oasis of comfort; hospitality and fine cuisine; a totally wild Atlantic salmon population that is thriving where the efforts to care for the stocks really do show positive results; and a team of people whose attitudes to service, work ethic and team spirit are second to none.

Find out more about fishing on the Ponoi via Frontiers Travel UK.

Last but definitely not least in my little round-up of salmon flicks is this new trailer that caught my eye starring well known Scottish ghillie and Spey casting demonstrator Ian Gordon called Blue Charm – The Movie. As far as I can see the full movie will be out later this summer of 2012. Watch FishandFly.com for details.

Long seen as being the home of salmon fishing, and much more than just another fishing destination, to those visiting, Scotland offers unique culture based on generations of people learning and refining the art of fly fishing for salmon.

One such person is Ian Gordon, his intimate knowledge of Scottish rivers coming from three generations of fly fishermen before him.

In “Blue Charm” Ian utilises this knowledge, along with his perfect understanding of fly-casting, to great effect in presenting this film, the theme of which is based around how to fish three different sized rivers; the magnificent River Spey, the wonderfully scenic Royal Dee, and the enchanting River Findhorn. The film encapsulates a great many facets of salmon fishing in these truly wonderful rivers, not to mention the outstanding bounty of Atlantic salmon and other wildlife which are found in and around them.

If I have missed out one of your recent (or indeed past) favourites then why not add the title and a link to it in the comments below so we can all check it out. 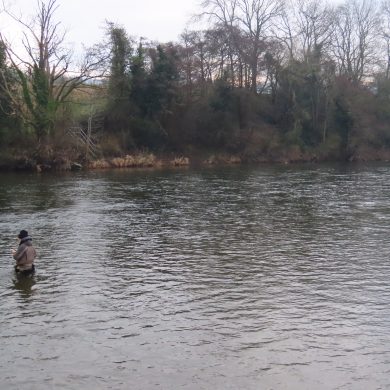