Actually there were two of them. Best mornings ever. And as to whether they really were my best two fishing mornings ever – who knows? They certainly felt like that at the time.

I woke up last Wednesday morning (not the one just gone, the one nine days ago). The night had been kind, the going to bed not too late. The sleep deep.

The time was 3am UK time of a few days before, but a very much more respectable 6am in the Russian Federation. I drank water. I swallowed an Ibuprofen 400 (like a fluo-pink M&M, very useful fishing trip medication). I slipped a spool of 12lb Maxima  into my pocket, and a half-inch brass orange tube-fly and donned thigh waders, specially bought from Farlows a few weeks before for the mission at hand (ie before-breakfast fishing, when the very last thing you want to do is pull on your chest waders. I mean before you’ve had a coffee? Please!).

Down to the river, 200 yards away. No ordinary river: this is the Varzuga. This was the Varzuga. Wide, sweeping, majestic really – she looked serious, yet promising. Not forbidding, well not this part of her anyway. And I waded in just upstream of the boats and swung the fifteen-footer about doing a mini, two rods-length of line double spey and easing line through the rings.

Then I suddenly cast past the big rock to the glassy patch  40 yards out, keeping the lower left hand close to my gut and pulling hard to shoot line easily though the rings as the tip of my Vision Catapult deployed its power.

On the fifth cast, the line pulled away into the flow. A salmon. On the 55th cast, another salmon. I looked at my watch, it was 8am Russian time – time to announce to my fellow breakfasters in a studied casual way (yeah, right!) that I’d picked up a brace before breakfast!

It had been a good morning. A good start, but only a start.

After breakfast I had a morning with Eoin Fairgrieve, a fun prospect. We fished, I fished, Eoin helped me in key areas with my casting. It was a privilege to be with him.

Then, half-way down Greenbank, another salmon, a strong fish, maybe 6lb – fish number 3 of the day. Very nice, on the Gledswood Shrimp (I know I’ve spelt that wrong!) that Eoin had leant me.

The best bit was when Eoin, with all his Tweed boatman experience said, ‘Let him go, Let him go!’ It was as though it was a first salmon, and calmed me to enjoying the take. Good to teach someone, lend them your favourite fly then see their line swing off as a salmon hit it.

We had an hour and a half before lunch and decided to fish the Wires, but as we walked up there, past ‘Christopher Robinson’s hut’ and down via a path through the bushes to the rocky shore, we saw Jess James out in the flow playing a strong fish. I started to video this, and took some photos but deep down I wanted to get straight out there myself and the morning was not over. But bear with me and I’ll post what happened in my next post! 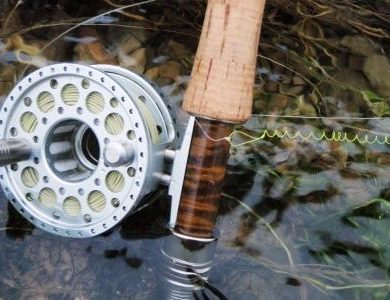 Fishing on the Frontier – Part 37: Leader to Hand
This website uses cookies to improve your experience. We'll assume you're ok with this, but you can opt-out if you wish.Accept Reject Read More
Cookies Policy