The Chalkstream Diaries – A Mild November

This November has been much milder than recent years with the first frost of winter hitting this area in the last week; this difference in normality has led to a mixed month for fishing. Throughout this month some brilliant olive hatches have been around with the grayling gleefully gorging on any little invertebrate struggling on the surface. Although there has still been fly life around we are still plagued by low water conditions, which is a worry due to the environmental repercussions that may result from it, and in the shorter term it has made the fish incredibly spooky of any movements along the banksides. It is also believed that the low water has meant that the coarse fish and in particular the pike have not moved up the river systems to their usual winter lies, and this appeared the case on a recent piking outing with Malcolm Anderson.

We met on a reasonably mild morning earlier this month on the banks of the Dorset River Stour with the confidence of a few fish and a good trip out on the water. Malcolm has targeted the pike for some time now, he with 3 other like minded anglers have built up a knowledge of pike fishing from scratch learning from trial and error and from one another. I was lucky enough to pick at Malcolm’s brains about his flyfishing for pike knowledge and watch him in action. The weather remained fair throughout the day, but it was obvious to see that the river was low and out of condition as the water was clear with long Ranunculus beds swaying with the current, abnormal for a stretch of river that is usually muddy ‘coarse-like’.

We set-up at the cars, I went with a 10’ #8 with matching line and then a tapered leader to a wire trace and snap swivel, as for flies they looked more like dead parrots than a ‘fly’ but I was assured that if there was a pike there it would definitely pounce! Some of the flies were Tarpon flies with an alternative use and some were large roach and perch imitations. To start fishing with an 8 weight rod and 8-10inch flies was somewhat a bizarre experience after fishing with little 3 and 4 weights for grayling for the recent past but within a few minutes a brutal rhythm was attained. The fly was being ‘chucked’ into the fishy looking holes and swirls. Quite a while passed without much success, I was lacking in confidence on a new water and the first pike outing of the year but then Malcolm picked up a couple of fish which gave me a bit more belief that there was something in the water.

There was a change of fly to a mainly white pattern with a blue/black tinsel top wing, the first cast splashed down in a small bay in the reeds on the far bank, the retrieve consisted of steady foot long pulls, and all of a sudden a flash, a boil, an almighty tug at the other end, and then…nothing. So what it hadn’t stuck, I now knew that I too could entice a fish into taking my fly on the end of my rod! Within moments I had another fast smash of the fly that didn’t stick, but I was now getting a good idea on where they were sat. It was just after this in another small reed walled bay that it happened, the fly landed, the retrieve began, there was an explosion at the end, and an almighty fight broke out! Not the biggest pike ever, but a pike nonetheless.

I may have only managed to land one pike to Malcolm’s 4, but it was a hugely enjoyable day out, and as with any fishing trip we left with a story of the big one that got a way. A fish we put at nearly 18lbs that flashed at the fly near the end of the day and then failed to show again, but definitely one of many winter pike days this season hopefully!

The last weekend in November saw the National rivers final for the England Youth Flyfishing Association held down at the Lower Itchen Fisheries in Southampton (open during the winter for grayling fishing), run by Dave Mee and Lisa Isles. It was a great day with a good turn out of young anglers from up and down the country (see photo below), the weather was good there were some olives around but the fishing was tough and put the youths through their paces. There was a clear winner with Carl Malpass who fished exceptionally well, but there were many good fisherman present and definitely stars to look out for the future. The competition was held in good sporting spirits and will go some way to providing us with our England Youth world team for summer 2012. 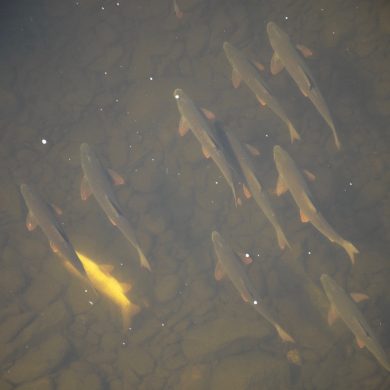