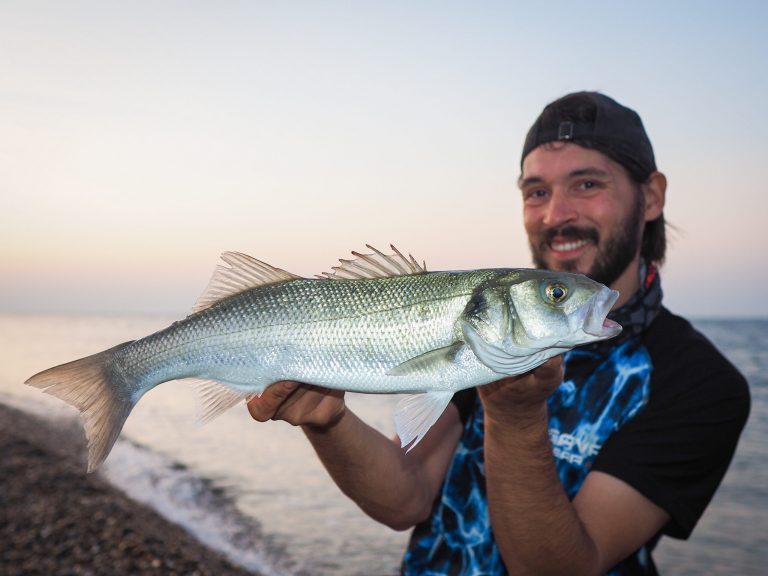 From Striped Bass to Sea Bass

Two days spent on the bank with Joe. It had probably been the best part of five years since we spoke face to face. We had previously worked together in a tackle shop while Joe was undertaking his studies. I was pleased for him when he made the decision to move to the US to pursue his career, a decade ago now. But good friendships last over thousands of miles. After catching up on personal life on the banks of the Wye, I quickly shifted the conversation to fishing.

After all, American lure fishing has had a great influence on our own UK fishing scene. With much of my early lure fishing being done with US musky and bass products, I was keen to learn about Joe’s experience fishing amazing waters in Maine and around Lake Ontario. Salmon, steelhead and smallmouth bass interested me, but the striper fishing really got the cogs turning.

Striped bass are a cousin of our own natives with a huge environmental range. They can thrive in both fresh and saltwater, and often run estuaries in large numbers just like our own bass. Striped bass are sea bass on steroids, capable of growing to a whopping 80lbs, rather than the 20s ours can reach. Joe fishes for the big ones using dead bait tactics, boat drifting on the wind, with larger baits weighed down by heavy leads. Although he also uses soft plastics and swimbaits for the smaller specimens.

After hearing all of this and with one session left before Joe’s flight home, I made it my mission to hook him up with a UK bass. To see just how ours stack up pound for pound as a sport fish.

I had the luxury of a pre-fishing session. Targeting the coast in a gentle Southerly wind and perfect tides. Taking a roving approach, I decided to target deep waters with reaction lures opting for a large 17cm Sandeel Jerk. The water was clear, with the odd flash of baitfish at close range. Terns and gulls were working close to shore, diving occasionally as close as fifty yards. I was in with a real shot at some bass, covering ground and occasionally sprinting towards short episodes of bird activity. I’d cast the lure to the horizon, wind a few feet, pause, then add some jerks. Slow and erratic, aiming to grab the attention of any bass looking up.

Although clear and bright, the small schoolies were plentiful, smashing the lures with pure aggression before diving to the deep. Great fun, but I hoped for something a little bigger. As the sun began to set my chances increased and I hooked up with a larger fish. A fierce fight followed as I chased the bass along the shore. A much better one around 55cms. The fish seemed beaten, just floundering in the surf, as I fumbled to unclip the net. The hook pulled free and the silence of a barren coastline was interrupted with a loud echo of an unmentionable word.

I soon recovered from my loss, and while pausing the lure had a hit from a decent fish. I chased the bass again dialling the drag back, unwilling to make the same mistake. Fast aggressive runs in surf raised my blood pressure considerably, as soon as the fish began to tire I charged in, securing my catch in the net. A beautiful fish in the setting sunlight. Released, and now content with my evening’s sport.

It was time to hit the coast with Joe. Restricted to a specific morning session, we would miss our ideal tide phase and to make matters worse, a 15mph crosswind had picked up with a fierce tidal current in matching direction. Our plan to fish with hard lures was abandoned. Our only hope was to fish with dense metals. Shore Jigs and Seekers would be our best choice to counter the elements. But with less visual attraction, we would have to meticulously comb every inch of water to find a bass shoal.

In many ways the conditions wouldn’t be too different to what Joe may find, shore fishing for striper on rivers like the Penobscot in Maine. We decided to take a roving approach and I took point to set the pace. It wasn’t long until I hooked up with a small schoolie. Then I turned my attention to Joe. Guiding him through the process of metals fishing. It took a while to get to grips with, but soon Joe had the Seekers dancing and working to his command.

We varied the retrieve. From drop and jig, to sink and draw, flutter, wind and pause. Analysing the depth our quarry would be feeding at in several metres of water. I was beginning to worry about the lack of activity. Suddenly, Joe felt a tap and set the hook. The rod hunched over and the fish used the fierce rip current to strip yards of drag, quickly ending up some 40 – 50 yards down the beach. I instructed Joe to chase it, all the while battling the strong fish. A tug of war ensued as the fish drew close to the surf, I dived into the water, net at the ready, and as the opportunity arose netted Joe’s PB.

A lovely size bass in the 50+cms range. Joe was thrilled, and in awe at the fighting prowess of our UK bass. Able to head home to the States with a great new story, and new species ticked off the list. Perhaps, some day I’ll join Joe in the US, and experience these monster stripers firsthand.