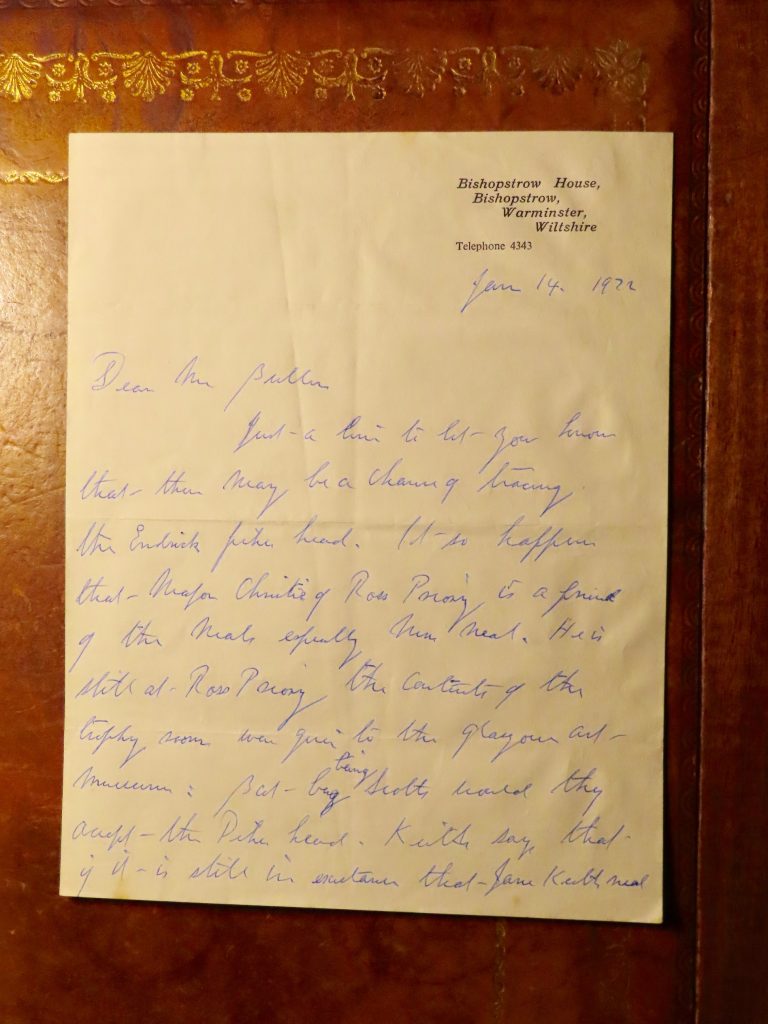 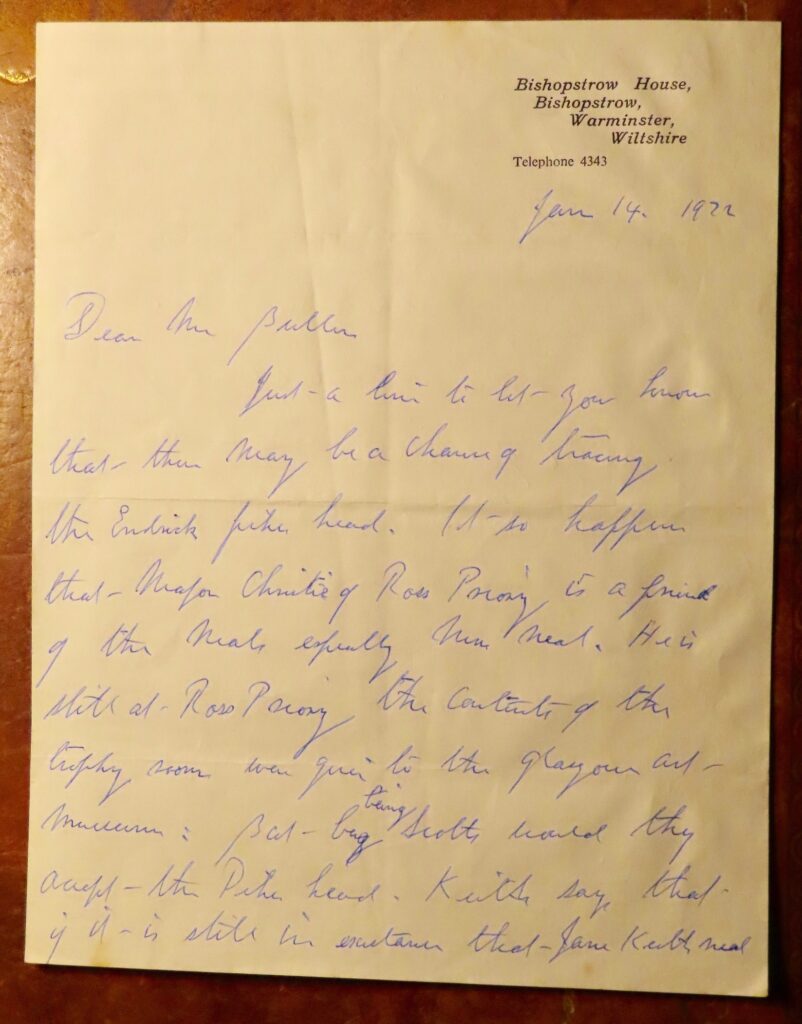 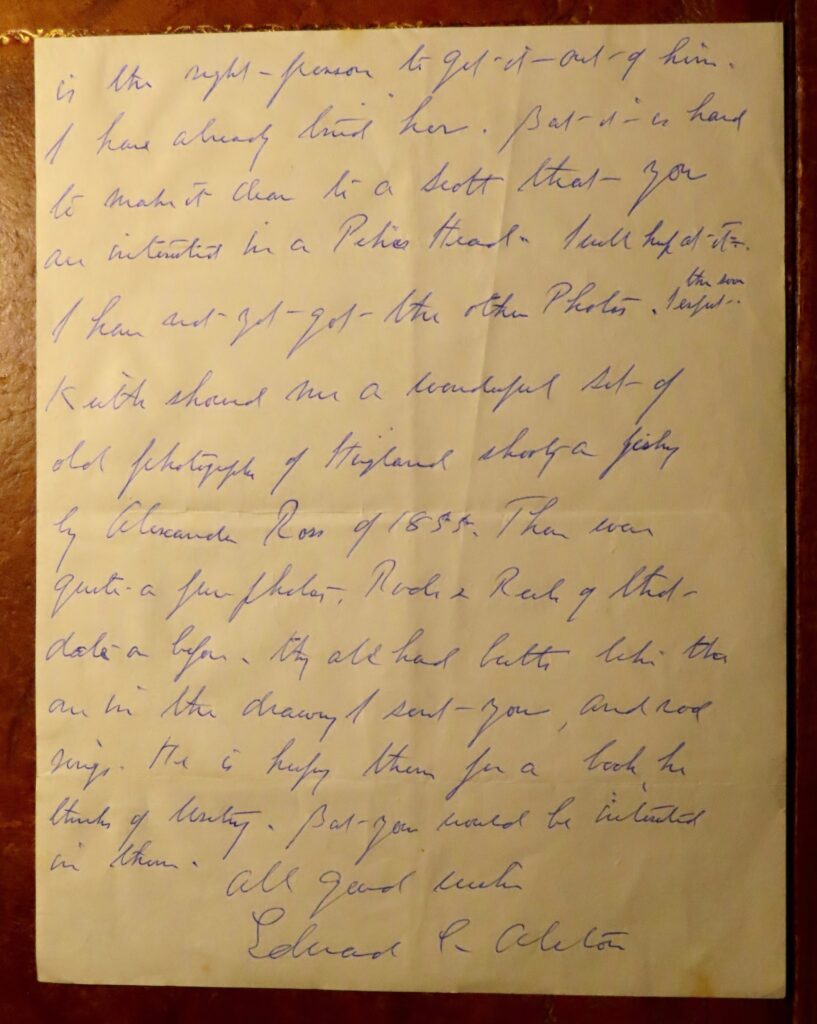 It seems that we are back to the formality of “Mr Buller” once more, and the handwriting is even more spidery than usual. That does not detract from the contents of the letter which relate to the iconic Endrick pike head of Loch Lomond. For the background to this letter, we have to go back to the events of 1967 on the Loch, as written up in Buller’s book Pike, pages 208/213 and pages 65/69.

That was the year that Buller, Richard Walker, Ken Taylor and Pete Thomas mounted their first (I think) pike expedition to Loch Lomond, inspired by the capture of a 47.11 lb pike there in 1945. There are two well known episodes of note during the trip. Firstly, Buller hooked, played and eventually lost a mammoth pike there, estimated to have weighed upwards of forty pounds, perhaps even fifty pounds or more. Buller’s gear was stout, a 3.5lb tc rod and big multiplier holding 200 yards of 25lb bs line. Finally, after a monumental battle the line gave at the swivel and Buller blamed his knot for not being a “hangman’s noose”. The loss of this fish is perhaps the most famous in the annals of piking history.

Secondly, the group of famous anglers made an evening trip to Ross Priory on the South bank of Lomond. There they met the owner of the Priory, Major Christie, and were shown one of the elderly man’s treasures, the fabled Endrick pike head. In 1934, a vast pike had been found dead on the Endrick marshes and the head was preserved, measuring an impressive 12 5/8th inches. Condition is all-important in pike weights, but all things being equal, at some stage in its life, this huge female pike must have weighed forty pounds, perhaps well over when in spawn, having eaten half a kelt!

When news of this ‘67 expedition filtered through to the South, Buller became an instant pike hero and Hardy were to bring out a pike rod to his design, bearing his name. Secondly, an army of young pike anglers began to dream of their own journey North and the Seventies saw Lomond emerge as the number one pike venue in the UK. You have to remember that this was half a century back, when cars were fallible and a four hundred mile drive was a major undertaking. This was at the start of the specimen hunting age, and these young piking Turks really did see themselves at the cutting edge of the sport.

Back to the letters! Unfortunately, Buller’s letter to Alston is not in my collection, but evidently the situation at Ross Priory had changed between 1967 and 1972. It appears that the University of Strathclyde bought the Priory in 1971 and it is quite probable Buller knew about this and worried about the future of the Endrick head. Alston’s letter suggests that at that time the aged Major Christie was still in residence and that the treasure was safe. As it still is! Today, this head that inspired so many young, aspiring pike anglers, myself included, can still be seen at the Kelvingrove Art Gallery and Museum in Glasgow.

Did Loch Lomond in fact ever hold leviathan pike? Tommy Morgan’s 47lb pike from 1945 and the Endrick head would suggest so. I ask this question because to my knowledge, thirty pounders were caught post-1970, but nothing to make the 50 pound mark tremble. The 1980s saw a new breed of pike angler emerge, anglers who were ruthlessly logical, with little truck for myths and legends. Their take was that the stories of Lomond monsters had been exaggerated over time, and that a 35 pound pike would always have been perhaps the normal limit for the water. Personally, I doubt that. Waters, even huge ones, are very volatile and can change dramatically over even twenty years or so. Just because we youngsters did not catch a fifty in the 1980s does not mean to say that they had not been there twenty years before. Powan numbers? Runs of salmon and sea trout? The food sources for Lomond pike have never stayed constant, and their ultimate weight limits would have fluctuated as a result of this.

As a conclusion, I first talked about the lost pike with Fred Buller in 1989. He was adamant that fish, clearly seen, could not have weighed less than forty pounds, and probably much more. I believed him then as I do now.

New Castaway Project Offers Fishing Therapy for Young People with Cancer
This website uses cookies to improve your experience. We'll assume you're ok with this, but you can opt-out if you wish.Accept Reject Read More
Cookies Policy