Norman Greenwood was a gentleman in every sense of the word, a fanatical fly fisher, an innovative and knowledgeable fly tyer and a man who had time for everyone. Many was the time I bumped into Norman at Steve Bielby’s shop in Otley to be greeted with a smile followed by a lengthy discussion on the attributes and tying of certain flies. He also always made a point of visiting me and my wife at our stand at Pateley Bridge Show, although I am sure he was also very busy demonstrating his tying methods in the next tent on the Nidderdale Angling Club stand.

Norman, as I have said, was a fanatical fly fisherman, with a caravan near his beloved River Nidd. He was a stalwart member of the Nidderdale Angling Club and appeared on Yorkshire Television’s Dales Diary demonstrating his art on the banks of the river. He is also be sadly missed at the Leeds branch of the Fly Dressers Guild where for many years he was a committed and dedicated secretary. I am sure his infectious laughter and sense of humour enhanced many meetings.

One fly that Norman will always be remembered for is The Sweet William, a firm favourite of those that fish the Nidd. He first tied The Sweet William in 1979, as a development of the John Storey, that famous North Yorkshire Fly.

Norman named it “Sweet” to represent the honey hackle used in the tying, and “William”, after his late father, John William Greenwood, who he was sure would have loved to have fished it. Apparently Norman found that it out-fished the John Storey regularly, although on the occasional day, the John Storey would still overrule.

The peacock herl body, as in the John Storey, remained the same, as did the “sail” style wing over the eye. The enhancements that Norman made were to add golden pheasant crests together with a few strands of red floss for a tail. He then varied the hackle colour, honey through to red game cock, to suit the hatching insects. He would vary the fly size according to the time of year and the fly hatch, size 10 to 12 for mayflies or size 14 for the other up-winged flies.

From personal experience I do know that this fly is a superb performer on the river Nidd and on many of our other northern rivers. I took guidance from Norman about the best way to fish the fly and have always followed his advice that it should be cast up and across, at some angle to the river flow. Norman advocated that this ensures that the first thing the fish sees is the fly and not the leader!

I am sure that all of you who are reading this and who knew Norman will join me in saying a huge thank you to him for just being Norman.

Hook: Size 14, lightweight dry or Size 12 for the “Mayfly” version.
Thread: Bright red or orange.
Tail: A golden pheasant crest feather above about 3/16” long of red floss (2-3 Strands).
Body: 1 or 2 strands of peacock herl (depending on its quality). On the Mayfly version I leave a loop of thread at the tail and twist it together with the herl, before winding it on after fitting the wing. this makes a more durable, but not so nice looking fly!
Wing: The tip of a mallard breast feather, stripped of its side feathers, spread out and tied in the form of a forward facing fan, before winding on the peacock herl body, from the tail end, over the wing feather’s tied down stem.
Hackle: Honey through to red game cock (I tie some of each for the mood of the day) with plenty of turns. On the mayfly version I put 2 or 3 different coloured hackles, including a badger or grizzle, with a honey and/or dark game. On all flies I now put 2 turns of the lightest colour Hackle in front of the wing. 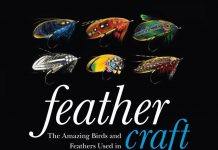 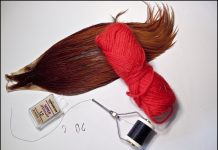 “I want to tie flies, what materials do I need?” 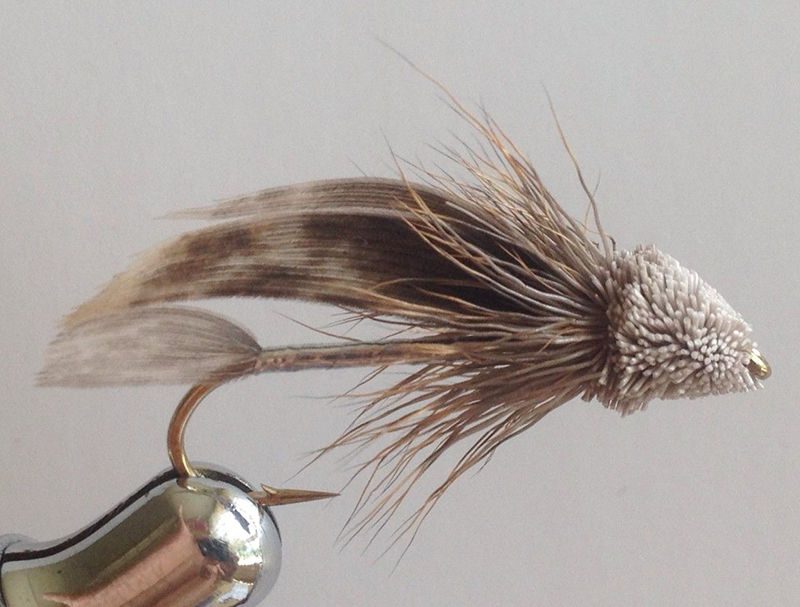