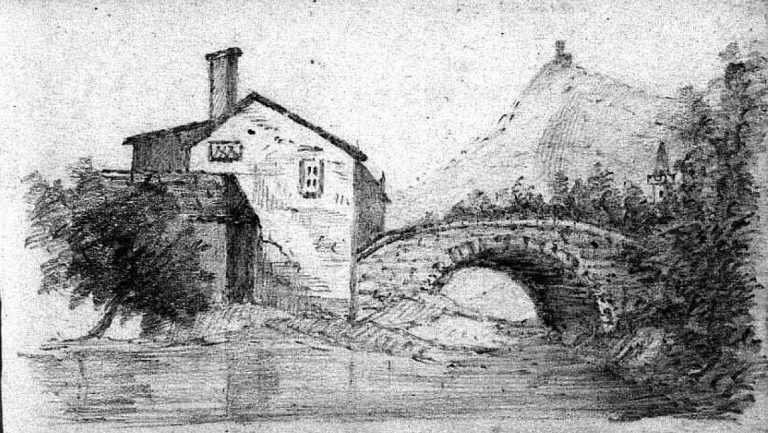 One of the untitled sketches by Charles Farlow. Do you know where this is?
Editor

A unique book featuring sketches by Charles Farlow has turned up in a provincial UK auction. The sketchpad, which is dated 1850 and carries the 191 Strand address of his London shop, was bought for just £100! It was snapped up by former Farlow’s chairman Richard Hewitt, who still collects historic memorabilia relating to the company. But he had no idea of the significance when he entered on online bid for a fisherman’s sketchbook, though the Farlow name was mentioned in the description.

“I didn’t even follow the auction, and the first I knew was when I received an email from the auction house saying that I’d won it.”

Hewitt, who runs the Fish & Fly and Thomas Turner Fishing Antiques websites, only realised what he had uncovered when he opened the tiny 3in x 2in leather-bound sketchpad.

“At first, I didn’t realise what it was. Then I noticed one page, in Farlow’s writing, that stated: ‘Mr Charles Farlow Fishing Tackle and Rod Maker, 191 Strand, N Temple Bar, London.”

Other pages show some highly competent sketches, musings and poems, while one is dated 1850, only 10 years after Charles’s brother John started his tackle business in Crooked Lane, near London Bridge. Charles joined him soon afterwards but the two parted ways around 1845 and ran separate businesses, though they remained close friends.

“I’m not sure what to do with it,” Hewitt said. “I suppose it really should be in a museum. In the meantime, I’d like to try to identify some of the places in the sketches.”

He added:“ I’m also considering publishing a small number of replicas, possibly as auction prizes at charity events in which I have a special interest. It’s certainly a very exciting and significant find.”