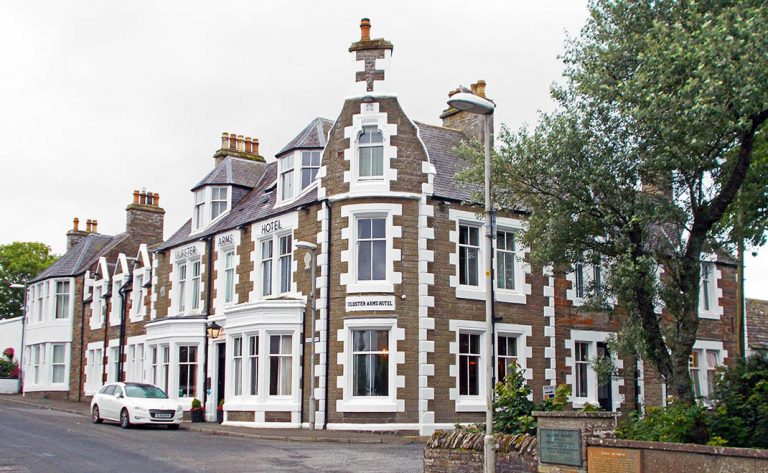 Arson is a Serious Criminal Offence

Fishing hotels are an integral and important part of the fishing holiday experience. Some of them are without doubt part of the folklore and history of the sport and are almost as famous as the fisheries they serve.  Ednam House, The Scourie Hotel and The Oykel Bridge Hotel are three obvious ones but there are many, many more.

One of them, close to my own heart as a regular Thurso rod for many years, is the Ulbster Arms Hotel at Halkirk, Caithness. Its fortunes, good and not so good, have always been inextricably linked with the salmon fishing on the river and at one time, when the hotel and the fishing were run by Lord Thurso’s estate, it was a term of the fishing lettings that anglers stayed at the hotel.

It always had what might be called “old world charm” but what it may once  have lacked in modern facilities was more than compensated for by the warmth of the welcome and service from the staff many of whom were long-serving.

Of course under the new management of both the river and the hotel it has been subject to a major refurbishment and upgrading much welcomed by guests, and it now has all the modern facilities required whilst still retaining its essential character as a fishing hotel.  Generations of fishers have spent happy times there and my family and friends have been amongst them.

So, if I speak of it with such regard, how could it possibly be that I was nearly responsible for burning it down? You will have to wait a little for the details but, assuming Scottish law is the same as English and has no statute of limitation for serious offences can I make it clear at the outset that it was wholly unintentional albeit a little careless of me and I am very ,very sorry.  The fact that a potential pyromaniac continues to stays annually at the hotel may be news of concern to the current management, but I can assure you that it was known to the management at the time who continued to give me a warm (but as will be apparent), not quite so warm welcome.

It is at this stage I must introduce a character central to the story and to the history and success of the hotel, the former manageress Miss Jessie Keith. Jessie retired some years ago but she continues to live in Halkirk and, although you would not think it, has reached a “certain age” which as a gentleman I will not reveal. I am pleased to say that she remains a friend of both my wife and I and we see her annually on our visit.

My first meeting with her was not auspicious. In those days the hotel did lack somewhat in facilities. Having checked in for the first time and gone to my room I realised that I did not have a key. There was a keyhole in the door so it seemed reasonable to assume that there was a key for it.

I returned to reception and pressed the bell. This time none other than Miss Keith appeared to deal with my query.  In fact Jessie is kindness and courtesy personified but, at that time, to me she appeared a very formidable lady who reminded me of Maggie Smith in “The Prime of Miss Jean Brodie.” She spoke slowly with what seemed to me to be the type of accent that you hear in the better parts of Edinburgh and enquired as to how she might be of assistance?  I asked for the key for my room.  She looked at me quizzically with raised eyebrows quickly scanning the register to get my name.  “Mr Dutchman-Smith” she said “the guests in this hotel are gentlemen. They do not do things in their rooms that require them to be locked – are you in some way different?”  I assured her that this was not the case and beat a hasty retreat. It was quite a few years later before I was given a key and then not because I asked for it.

It would be very wrong to conclude from this that the hotel was regimented formal or stiff. I was going to add “cold” to “regimented etc….”but then I realised that, at that time, one of the problems with the hotel was the heating system. It was antiquated and unpredictable and particularly on early spring visits the bedrooms were cold. In order to ensure the comfort of guests the rooms were supplied with electric blankets. This was something of a novelty to me but very welcome and I enjoyed it so much that when waking in the morning I would often switch it on again to maximum to warm me up sufficiently to face the cold of the bathroom which was not always en-suite in those days.

One year I noticed that the electric blanket was missing. I assumed this to be simple oversight and did nothing about it. However, when the same thing occurred the next two years (in different rooms) I decided to make enquiries. I started with my brother who at that time was my regular fishing companion. I asked him whether he still had an electric blanket and he confirmed that he did.

“Come on Malcolm, you must know!”

I plucked up courage and asked Jessie why I did not get an electric blanket these days. Our relationship had warmed over the intervening years and she smiled and said “come on Malcolm, you must know!” I was genuinely perplexed and when she realised that I was in fact in total ignorance she disclosed the whole tale to me.

Three years previously I had forgotten to turn the blanket off before leaving for the river. Housekeeping did not get round to the room until the early afternoon when they were attracted by a smell of smoke and observed it seeping under the door. Entry revealed the mattress and bedding alight but mercifully it had not yet spread further albeit some smoke damage to the ceiling and walls was apparent. By the time I returned from the river not merely had the fire been extinguished but the mattress and bedding had been replaced, the room cleaned and fresh paint applied to the walls and ceiling.  Now it was mentioned to me I did recollect a smell of paint in the room but thought nothing of it.

It was not just the service that was impressive.  Despite the significant  nature of what had occurred,  in the intervening years, neither Jessie, the staff of the hotel , the River Superintendent, gillies, or any of the locals who frequented the hotel had made any reference whatsoever to me or my brother of what I had done. Given that I never held back on poking good natured fun at them it was a lot more than I deserved.

In the articles that I have written I have refrained from giving advice as I am all too aware of my own limitations and inadequacies. However, on this occasion I am going to offer some and it is this; if you have a good day on the river and celebrate a little in the bar do not order Spaghetti Milanese for dinner.

For me four fish was a very good day and worthy of a dram or two in the bar to savour the unusual experience of being at the top of the catch list.  I had never tasted Spaghetti Milanese and had no real idea what were the ingredients apart, of course, from spaghetti. For some inexplicable reason I ordered it probably because it seemed quite adventurous for the hotel menu at that time. In fact, in due course what little of it I ate was very good. However the majority of it ended up either on my shirt or forming a large circle on the otherwise pristine white table cloth around my plate. It was all very embarrassing and I was expecting a perfectly justified rebuke from our waitress Carole.

I was surprised but relieved that the matter did not raise any comment at all. Very professionally the plate was removed and instead of just brushing a few crumbs off the table cloth she coped well with removing the spaghetti. I felt very grateful to her as nobody on the other tables appeared aware of my failings.

“Chef would be obliged if you would wear this tonight!”

The next night things were back to normal. I had caught nothing that day and felt it prudent not to go in the bar before dinner. By the time I entered the dining room all the other guests were already seated and the room hummed with good natured banter and conversation. I had ordered a simple steak with no sauce and after Carole had delivered it to the table she went back to the kitchen but returned holding aloft in her hand for all to see a plastic baby’s bib, the type with a tray at the bottom to collect the droppings. It was bright orange in colour and as she walked through the room she made sure that it came to the attention of everybody. When she reached me she proclaimed in a loud voice “Chef would be obliged if you would wear this tonight!” and so I did.

Fishing holidays are not just about the fishing.  Not that long ago I emptied the pockets of an old jacket which, when I could fit into it, I wore regularly at the Ulbster. I came across a handwritten note of the words of “Down Below” (a humorous but respectable tale of the London sewerage system). It had been given to me many years previously by an angler who, although born in London, had lived for many years in Canada and had been one of the regulars in the same spring week as me. The guests that week were from very varied places, backgrounds and occupations but we gelled together and had great fun regardless of the success on the river. The words had been written out for me at an impromptu alcohol induced “sing song” which had developed in the  lounge after dinner one night. Happy days indeed, although it saddens me to remember that many of the people then present are no longer with us.

You can read our book review and find out how to buy yourself a copy HERE!

Start typing to see results or hit ESC to close
salmon fly fishing chub roach pike
See all results
More Stories
Abel Acquired By The Mayfly Group
This website uses cookies to improve your experience. We'll assume you're ok with this, but you can opt-out if you wish.Accept Reject Read More
Cookies Policy