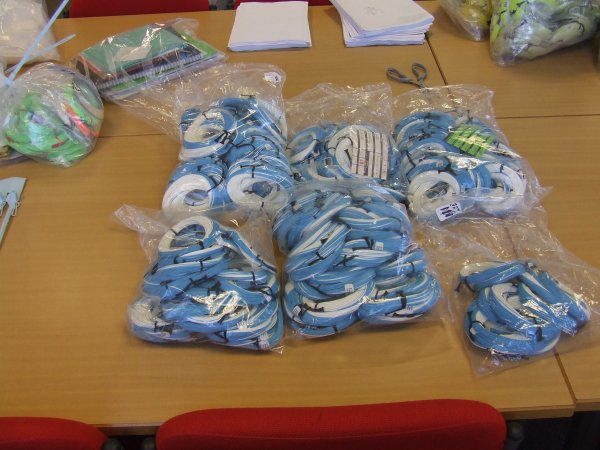 The case was brought by North Yorkshire County Council Trading Standards Service  against Ian Bailey, an eBay seller from Mickle Trafford, near Chester, and Northern Sport Fishing, a manufacturing company from Bromsgrove, West Midlands and its director Richard Tramer.

The investigation began after a complaint was received from Chris Hartley, a director of Guide Flyfishing Ltd of Sherburn in Elmet, which holds the sole UK rights to sell Rio line. Test purchases of fly line by a trading standards officer and a number of fly fishing line companies around the UK established that Bailey was selling fake lines under the brand names Rio, Snowbee, Greys, Hardy and Loop.

Inquiries showed he had a turnover in excess of £156,000 through his eBay accounts ‘Telewatcher’, ‘the line man’ and ‘Hardyclassics’. When trading standards officers executed a warrant at Bailey’s home address they seized more than 5,000 lines.

The court was told that brand holders and eBay had received complaints from consumers who had bought line from Bailey. In statements to the court, both Chris Hartley from Guide Flyfishing and Russell Weston, managing director of Snowbee (UK) Ltd, outlined the damage to a brand’s reputation and the customer complaints and customer dissatisfaction that resulted when a fake line did not perform as expected.

Judge Andrew Stubbs described Ian Bailey’s offending as ‘brazen’ and said there was a “corrupt business relationship” between Richard Tramer and Bailey, which had had a potential loss of turnover to the genuine businesses of well over £100,000, coupled with the potential loss to their reputation and repeat business.

County Councillor Andrew Lee, portfolio holder for trading standards, said: “Purchasers of the lines sold by Ian Bailey were expecting to get a product which performed to a very high standard. Instead, they received mill ends and mis-described lines which were of a poor standard.”

Chris Hartley, from Guide Flyfishing Ltd, said “The lines we purchased from Ian Bailey through eBay are greatly inferior in virtually all respects, with none of Rio’s technology. Anyone buying these products believing they are genuine Rio products will be extremely disappointed, and we are aware the seller requested that any purchaser not satisfied return only to the seller, thus avoiding any contact from the customer with Rio or ourselves.”

“It is difficult to quantify the number of fake Rio lines sold but there will be disgruntled members of the public who believe that Rio is of poor quality. In conclusion, we need to make people aware that branded products should only be purchased from authorised approved retailers. The old motto still stands true – ‘If it looks too good to be true, it likely is’.”

Suspected counterfeits of any kind can be reported to trading standards via the Citizens Advice Consumer Service on 03454 040506.

Start typing to see results or hit ESC to close
salmon fly fishing chub roach pike
See all results
More Stories
Scott Fly Rods : Behind the Scenes
This website uses cookies to improve your experience. We'll assume you're ok with this, but you can opt-out if you wish.Accept Reject Read More
Cookies Policy