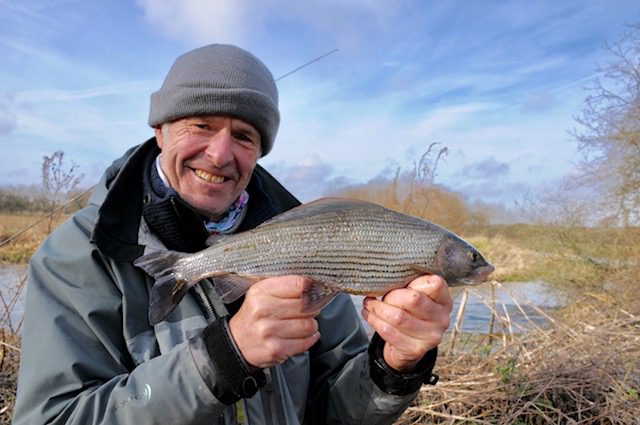 Go, Get A Grayling This Winter

This is NOT another potboiler by a writer trying to sell an article. This is a plea from the heart that if you love wild fish and if you relish rivers, then you are simply bonkers if you do not consider some grayling action this winter. Me, personally, I honestly can’t think of anything not to like about them. They live in our most glorious rivers. They are not hard to catch, generally. They fight way over their weight and they look gobsmacking. You can catch them trotting, which is lovely with float rod and pin if you are going to do it right! You can catch them on feeder – but we won’t talk about that. But you can catch them on fly, on Czech nymphing and this really is the easiest way into fluff chucking there is.

But before I go on with this, a MASSIVE word of caution. Grayling are our most delicate, fragile, vulnerable species. They fight to within an inch of their life, literally. I’ve rarely netted a single one that has not been exhausted by the end. So, if you want a trophy shot make it quick. The best way to return them is to let them rest on top of water covered reeds, rushes or weed in the margins of the river. Don’t keep holding them upright because your touch stresses them further. Let them lie for as long as it takes with water brushing over them, their gills especially. You can fish on but check them every 5 minutes till they move off under their own steam. I’ve tried a hundred ways to return grayling and this was taught me by Slovenian maestros and is the best method for sure. I’d be failing the fish if I did not make a BIG thing of this issue so thank you for sticking with me.

I could talk about the glories of being out in valley and dale in the frosts and mists but you know all that. I’ll get on with POINTS TO PONDER – which seem to me a good way of focusing on the best ways to approach any fishing situation.

Southern Scotland, Northumberland, Yorkshire, Derbyshire, Lancashire, Wales, Lincolnshire, Herefordshire, the entire swathe of counties that make up Wessex. There really are grayling nationwide, apart from East Anglia where they finally died out in the 1980s. So, apart from an unlucky few anglers, there are grayling in a river near you. Big fish are all about Post Codes. If there are three pounders in your river, fine, but remember a one-pounder is a fish to be proud of and a two on any river is something special.

You can pay £60 or £70 per day on some of the southern chalk streams and as little as £50 per season on some Tees beats. Many rivers are in between and not out of reach financially. If you are trotting, you have the float gear and two pints of maggots will do you for a short winter’s day. If you decide to nymph fish – and you should – a complete outfit, with flies, should not set you back more than £150 if you shop around. Look for a 10ft 4wt rod with reel and floating line to match. A few nylon leaders and a pot of floating putty for a strike indicator and you are set. It could not be easier. I’ll add chest waders are very useful on rivers where you are allowed to wade.

If you decide to try the fly, it is never a bad idea to buy a day’s tuition to start you off. In the North, I can’t recommend Olly Shepherd of Fly Fishing Yorkshire too highly, even though he is a bit of a good-natured upstream grayling purist. You’ll have a great day, be inspired, and never look back. In the South, Simon Cooper at Fishing Breaks is a great guy who will have ideas…albeit slightly costly ones. We are talking the Stockbridge area after all where a bottle of cider costs £12!
Talking dosh…I did mention a modern 10-foot fly rod can be picked up cheaply, but good built cane is hard to beat. It has an easy action that just suits Czech nymphing so if you are looking for an excuse to splash out on a vintage Hardy, I’ve just given it to you on a plate!

Grayling will live anywhere down a stretch. Personally, I look for steady runs over nice clean beds of sand, chalk or gravel. Grayling do not like boiling water or dirty riverbeds. Water between 3 and 6 feet deep I think is perfect. Don’t overlook the obvious places like weir pools and always look for grayling rising and giving away their location.

My kit would be a 14 foot rod, pin loaded with 4 pound line and a size 16 hook with two maggots as bait. The stick float size will depend on flow and depth of course. I like to go light but heavier water is an issue and you need to see the float at distance. I have seen grayling caught at 70 yards but you and I are doing well to pick them up at 50, I’d say. I feed moderately and I move slowly down the run until a shoal is located. You can catch a clutch of fish till the group spooks and disappears. This whole approach depends on travelling light. This is not really box/chair work. A little bag with spares and a pouch around your waist for maggots and you are free to roam.

Let me say at once that you can catch grayling on dries (floating flies) but fishing artificial nymphs down the flow is more reliable in winter. There are purists who look down on the method because it is easy to make a start on…but much harder to become expert at. I talked about a strike indicator earlier and these are essential if you are to see the lightning quick takes. But a strike indicator is nothing more than a tiny float placed up the line from the fly. You are in effect trotting with fly gear. Set the indicator at about the depth of the swim, just as you would with a float and maggot set up and you are in business.

Wading to your knees is useful if allowed. Pull a bit of line off the reel and flick the strike indicator and nymph upstream five yards or so. There is no real, traditional casting as such. It is more like a short roll cast when you just turn the rod tip over and the line “rolls” out. Easy, honest. And you will very soon get better.  Follow the indicator down with the rod tip and when it gets to its limit downstream, simply lift off and repeat the process. Move slowly down the swim so you are covering water and looking for the grayling as you go. Strike if the indicator goes under, stops, moves across or upstream. Set the indicator so the nymph bounces bottom so you will get false bites, just as you do with normal float work.

You can use teams of one, two or three flies. Even after thirty years of doing this, I still prefer a single fly on the end of the mono leader. You get no tangles and you stand less chance of a big fish finding a snag. Most grayling flies are lead weighted and often tied to resemble shrimps with a dash of pink or red. Buy a selection of a few patterns on hook sizes 16 or 14.

Well, it wasn’t actually mine but I was guiding Simon Ellis in February 2019 when he caught all 4 pounds 8 ounces of it on a bright afternoon on a Wessex chalk stream. I’m finishing with this fish because it was caught on a nymph from a long, smooth run down which we had float fished maggots the previous three days. You see, the disturbance caused by a biggish float had spooked that mammoth fish but when Simon crept in with a tiny indicator and single fly, it took with supreme confidence.

The Lesson? Do not think bait is always best because it is not. A real point to ponder.

Start typing to see results or hit ESC to close
salmon fly fishing chub roach pike
See all results
More Stories
The Ultimate Field Test – for a wading boot!
This website uses cookies to improve your experience. We'll assume you're ok with this, but you can opt-out if you wish.Accept Reject Read More
Cookies Policy