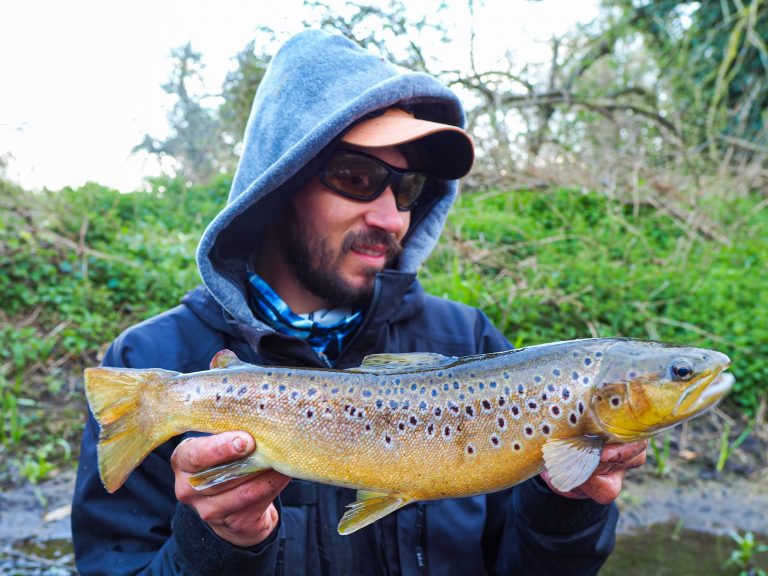 Faced with Arctic weather and very poor hatches, I decided to go big this year for trout. Fishing with streamers for an early season giant was my plan. To improve my streamer fishing I went South, catching up with friends and learning about lure fishing for trout. Trout fishing with lures has helped better my understanding of the types of movement, speed and patterns that trout respond to. Now armed with fresh ideas, I set out with the fly rod back home.

I recently gained access to very inaccessible section of chalk stream. Deep, slow and overgrown, access from the bank would be impossible. I decided to tackle it from the water, going afloat in my kayak. Fly fishing from a kayak would prove challenging. I even managed to snap a rod navigating through dense brush. I was beginning to question my idea, feeling like an idiot as I paddled back to the car for a second set-up. Deflated but undeterred I carried on, carefully paddling through the stretch. Suddenly, I spooked two big browns. I knew I was in the right area so I stopped, took an hour’s breather, and waited for my opportunity.

An observation I made when lure fishing, was that lures fished upstream had a far more successful catch and hook-up ratio. In a deep, fast river this it would be difficult with a fly. A sinking line would be necessary, paired with the heaviest fly in my box. A big Fish-Skull Woolly Bugger. I cast the fly upstream as far as I could manage, allowed everything to sink, and then began to strip my line back fast. I wanted to maintain a constant movement in the fly, adding the occasional flick and wiggle of the rod tip to dart it through the water column. The progress was slow as I cast and worked my way quietly upstream.

Hours passed, and suddenly a take, my stripping hand jerked forwards by the force, I raised the rod as the fish tore upstream. There was little I could do but hang on as more backing released from the reel. The fight was intense, the fish bolted and jumped at every opportunity, keeping out of netting range. Eventually the fish slipped up, swimming a little too close, a well-timed jab with the net, and I sealed the deal. I was blown away by the behemoth in front of me. A trout of immense proportions, estimated somewhere around 5lb. My second biggest trout from a river. I took a very quick photo and slipped her straight back. Having fought so hard I wanted to ensure she was released with minimal fuss. I fished on a little longer before calling it day. Eager to try again.

Unsure if the larger fish are all well-established stockies or huge wild browns thriving out of sight, I returned to the venue. I wanted to catch more, and see just what lurked in this section. I returned a few times, finding the fishing challenging. I experimented with different styles of streamer, and even managed a few nymphing. By far the most effective colour I found was black, and they almost always preferred a quick retrieve. Fishing upstream was the only way to get close. I succeeded in tricking a few stunning wild trout, but continued to hunt for a giant. I really was in the thick of it, the most overgrown part of the section. I hadn’t yet dared to fish this part. It looked fantastic, a big hollow carved out beneath the surface, and below the roots of a willow. Prime habitat for a trout on a very bright day.

Casting was near-impossible. I crept really close, wiggled some line free, and managed a short roll cast. Seconds later I was into a powerful fish. An aerial, acrobatic display broke out, giving me a rush of adrenaline. Trout really know how to fight and they don’t give up. This one had me on the ropes, diving through tree roots and snags. I thought my chances of landing the fish were slim, eventually the fish tired and slipped in to the net. I was shaken, beaten, and in awe of the magnificent creature in front of me. A stunning, big, wild, male brown trout. I have been searching for a specimen like this for years. I slipped the fish back, relaxed for an hour to take in the experience, and thought about the journey. I was happy to end this chapter of my mission.

My previous lure fishing adventures had definitely helped my streamer approach, leading to some early season success. Now I’m keen to return as the weather warms and the fly hatches become more abundant. Hopefully, I can tempt a big one on the dry fly, among my days targeting bass.

Fishing with streamers and lures is a great way to get into fly fishing on still waters and rivers. You don’t need quite the variety of flies associated with traditional styles. A handful of patterns is plenty to get started with. They are easy to cast and stronger lines will work, making mistakes far more forgiving.

The rod I was using is a 9ft #5wt Scierra Salis. It’s designed for heavy flies and big fish. I use a pretty basic Scierra Track 2 reel, it has a drag system which I prefer when using light lines. A 4 or 5wt will cover a range of venues, while being great fun for smaller wild trout. You can go lighter but may struggle with larger flies in windy conditions. Sinking lines are great for keeping lighter flies down, and are usually easier to cast.

I de-barb my flies prior to fishing with them. I find they require far less force to hook up, and are better for catch and release. Usually hook holds are great on fly rods, as they cushion so much of the strain. 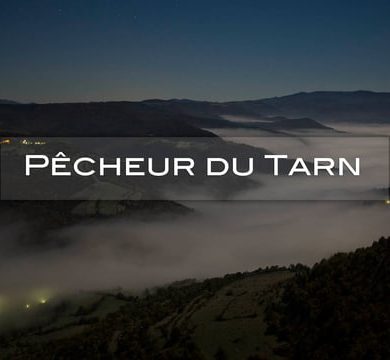