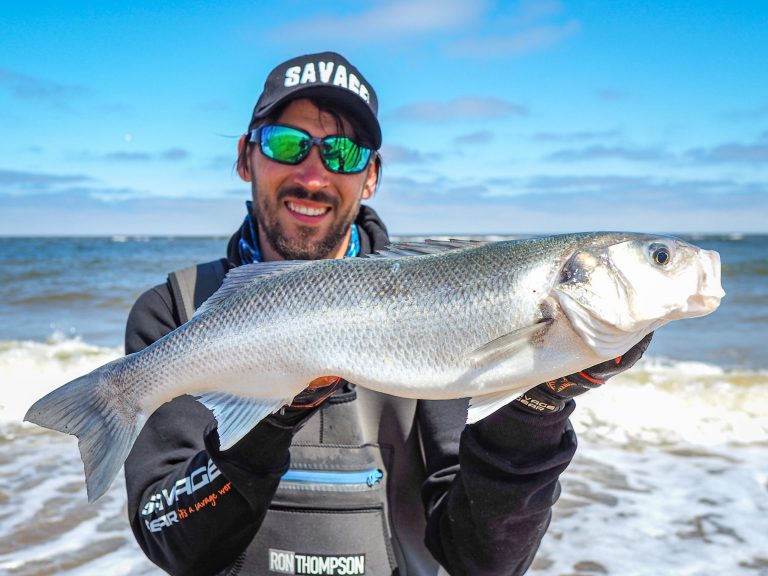 I was thrilled with this corker
Robbie Northman

A new day, fresh tide, and gorgeous weather. We are back on track this year, aside from a bit of lingering May bloom, the coast is pretty clear. I received a very cool delivery this week, a rod that I’ve been wanting to get my hands on. The Savage Gear SGS8. It’s a collaborative effort between Henry Gilbey and Mads Grosell. Designed solely as a lure-launching bass machine. The most expensive lure rod Savage Gear have produced at £300, ouch. It’s a tackle tart’s dream with 1100 Toray carbon and Fuji Torzite guides. I was keen to put it through its paces, but sad to retire my trusty old Salt CCS, a reasonably-priced rod that has served me well. Softer rods can be heaps of fun for bass. Many early lure rods have softer fish playing actions that are lost on modern carbon. When range is necessary there has to be a compromise.

I started my session covering ground, distance casting with metals. I launched them to the horizon, allowing them to sink and slowly jigged them back. Walk, cast, fish, walk, cast, fish, a man on a mission. I continued this process for about 45 minutes, and suddenly found a school of bass. Three fish in consecutive casts, fierce little fighters around 40cms. After the bites dried up, I carried on fishing and roaming for another 10 minutes or so. I felt a tap and hooked up with a small schoolie, followed shortly after by another fish. I had found good ground and decided to scale up, hoping for a larger fish.

I rigged up a 31g 13cm Sandeel Shad and cast back into the productive area. I felt a few taps from smaller fish but didn’t connect. Continuing my search for bass, I waded deeper into the surf amongst the pounding waves. Perhaps if I could gain a little range there may be a better fish behind the schoolies. My hunch proved correct, a few jigs into a long cast the tip slammed around. I was in! A much better bass. Drag-screaming runs and adrenaline-fuelled lunges followed as I fought a strong fish amongst breaking waves. I balanced the fight between dodging big breakers and playing the fish, a difficult task. The fight was ultimately won, I reached down to net the fish taking a wave to the face! The soaking didn’t matter as I had netted my prize. A beautiful bass around 6lb. An awesome fish to reward the day’s effort. Nothing that followed came close in size, but I was thrilled to experience that magical moment.

Tackling barren sections of coast for bass can be challenging. My go-to approach is to cover ground. The shoals can move quite fast, and surprise you when they do turn up. Long-casting metals and crankbaits are perfect for the roving approach. Once I find fish, I often like to pick apart an area with soft plastics. There are hidden features to target, and finding those can bring bonus fish. I pay attention to the birds, if I see gulls diving it’s a good indication of a baitfish shoal, hopefully, the bass aren’t far behind.

Other features are noticeable on the lowest tides. Changes in depth, contour, bottom texture, gulleys etc. It’s worth finding a reference point on shore to locate these features once submerged. Often a small feature can attract fish. Sometimes break water indicates a change of depth or contour and is well worth targeting. Looking for lines caused by current can give you an idea of where the fish may be sitting. Moving water brings a steady stream of food. There’s often much more going on than first meets the eye.

Traveling light is essential, picking a rod that covers all techniques helps. Long rods aid in casting but good balance equals comfort throughout the day. I find rods around 9ft, paired with a 4000 size reel, feel good in the hand. Casting weights around 15-40g cover most styles, but you may not get the optimum performance when fishing with lures under 30g. So, for anglers that prefer smaller hard lures and soft plastics, a rod in the 10-30g range is better suited.

I fish heavy braid. 20lb stands up to saltwater and abuse, with a matching fluorocarbon leader you can feel confident in the limitations of your gear. Knots are where most set-ups fail. I will explain the two I use to maintain maximum breaking strain with my tackle. First is the Back-to-Back Uni Knot. My favourite due to high strength. I use this to join braid to leader. I often double up on the braid to reduce wear over multiple big casts. I’m not a fan of swivels and clips, my go-to knot for attaching lures is the Non-Slip Loop. Having a loop attaching the lure improves lure movement and reduces line twist.

Both knots adapt nicely to freshwater use and are definitely worth learning.

Start typing to see results or hit ESC to close
salmon fly fishing chub roach pike
See all results
More Stories
European Anglers Call for Tighter Controls on Salmon Farms
This website uses cookies to improve your experience. We'll assume you're ok with this, but you can opt-out if you wish.Accept Reject Read More
Cookies Policy