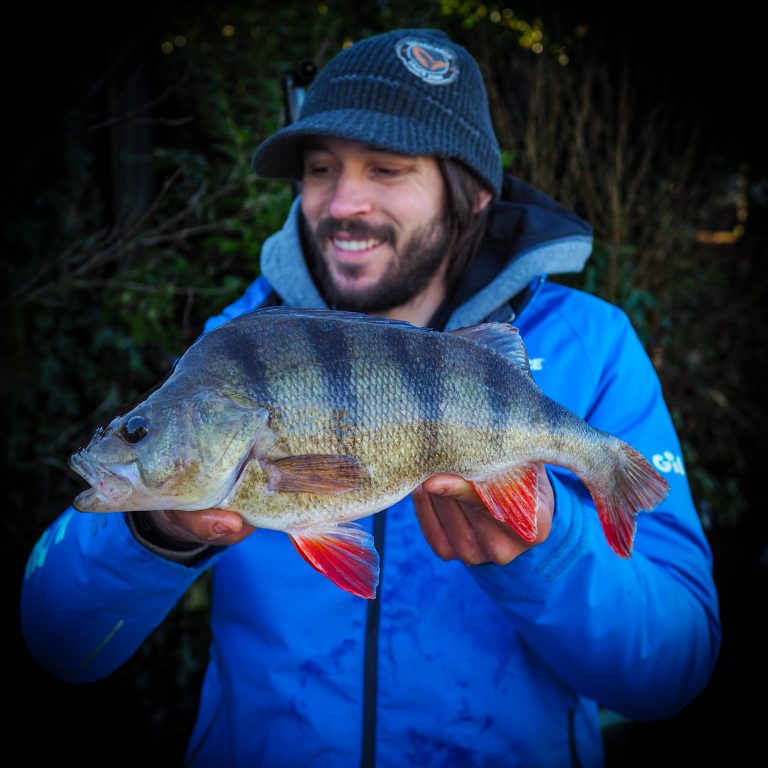 Mild weather, a little sunshine, and lightly stained water. Great conditions for a day afloat chasing perch. High but stable air pressure and mild air temperature increased my confidence. Earlier in the week I encountered a hard day saved by one beautiful fish. Now, having built a general idea where they would be holding, it was time to return for Round Two. When nights fall very cold with warm daytime temperatures I feel confident in a lunchtime bite. So I began my day with a rather lazy 10.00am launch. It was a long motor to the area I planned on fishing, and I would spend around 2-3 hours there through the warmth of the day, before targeting other areas at dusk.

It didn’t take long to locate shoals of roach and bream with the side scan. They were spread out over a wide range so I decided the best approach would be to keep on the move, covering ground and working the area in 30yd sections. I’d start on structure, fanning my casts around the swim before hitting the next spot. Picking my lure for the day would prove easy with the conditions presented, I picked out a cray imitation, rigged on a light jig head with a bulky skirt. Slow drop and big water movement is the best way to produce a bite from a fish suspended off the bottom. Cast, drop, lift, drop, pause. A slow rhythm to comb the swim and hopefully tempt a big perch.

I carried on from swim to swim, following my plan to the book. Bang! As the lure approached the boat I felt a solid hit and set the hook. The light rod bent double with the unmistakable thump, thump, thump fight of a perch as it dived deep towards the shadow of the boat. This wasn’t a huge fish, but in the moment the excitement and adrenaline takes over. I was certainly alert now, as I netted a plump young perch close to the 2lb mark. A great one to kick of the session, and a good confidence boost for the day ahead. The lure hunch had proved correct with the cray-jig combo barely visible in the cavernous mouth. I released the fish, keen to carry on in search of its grandmother.

It didn’t take long before the recurring excitement of a hit on the jig. This time they weren’t perch, just very convincing imposters. Crafty pike in the 3-5lb range, which seemingly love to head-shake much like a perch, they have you totally fooled until a sudden burst of raw speed gives them away. Not the intended target but welcome fun. I’m almost always rigged up to handle a pike or two. Either with heavier gauge fluorocarbon or fine wire. Although often smaller fish, occasionally magical specimens will fall to perch tackle.

An hour or so had passed, nearing my favourite lunchtime bite time. Having no more perch encounters I decided to head back towards the area the action began. I covered the water with a fine-tooth comb, confident predators would still be laying in wait amongst the scattered shoal of roach and bream. I even tried crankbaits and ned rigs in the area before settling for the jig again.

Slam! Another confident bite shook the rod tip and I set the hook, connecting with a much heavier fish. An imposter pike? It was hard to tell, with a mixture of aggressive head-shakes and short drag-pulling runs. I backed the drag off just in case. The fish took the opportunity to run, darting beneath the boat, loading the rod round to a very unusual angle. With pressure on I gained ground, capturing a glimpse of striped flank. The fish approached the surface, head-shaking to throw the lure. Net at the ready, the battle was soon won and a beautiful perch was on board.

This was one beautiful perch. A pristine coloured-up fish with a great frame to match. I was absolutely thrilled, although slightly puzzled about its unseasonal low weight. I decided to check the fish for wounds and parasites when I noticed something I’d never seen before. A hook protruding from the anal vent of the fish! Judging by the severe, uneven, corrosion on the hook, I assumed it had been passed through the digestive system of the fish. This explained why it may have struggled feeding at some point. However, it was in healthy enough condition that it should have gotten over the worst of its ordeal. I removed the hook, setting the fish free to carry on gaining weight. The rest of day didn’t prove as prolific, with a few smaller fish caught and some fun discovering a sunken boat which I later confirmed with the GoPro.

This brings forth thought of a study I read about with bluegill. Fish were hooked deep and monitored to see how long it took for them to naturally pass hooks through the system, while analysing mortality rates. This was also conducted with fish that had the same hook holds, where the hook had been removed. The results were interesting, with 71 percent of fish shedding the hook after 10 days. While mortality was higher in unhooked fish. These are bluegill hooked in the oesophagus (deep throat, which runs close to other vitals, brain & heart) and not perch. However, it was an interesting study about a subject I rarely encounter when lure fishing.

I’ll attach a link to the overview of this study if you’re curious as well. There has long been a debate with deep hooked fish, whether it’s safer to remove or cut. Which originally caused me to seek out past studies while bored one evening. https://www.sciencedirect.com/science/article/abs/pii/S0165783609001015