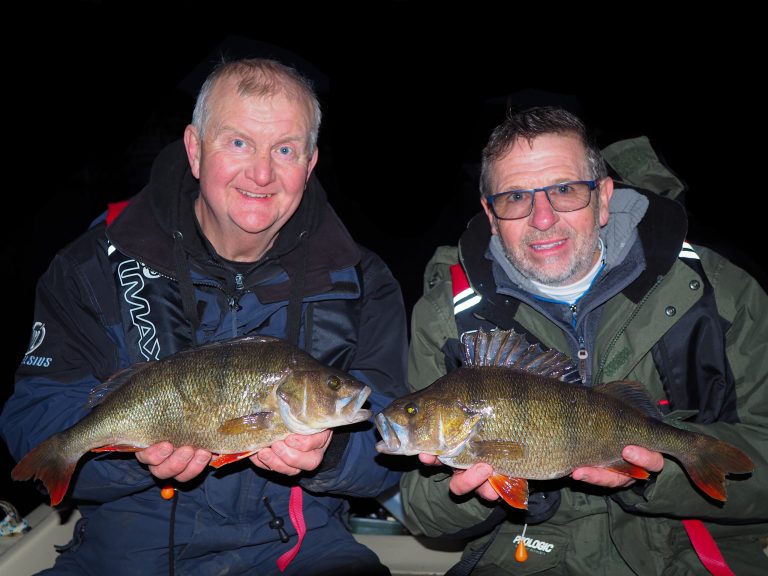 It was time for a day out that I look forward to every year. A visit from Kevin and Ken. I’m joined each winter by the guys, who make the journey up to visit me in search of a big perch. Last year proved challenging, with a few fish up to low twos. However, this year conditions were perfect.

We decided to meet in darkness, preparing the boat, ready for a long motor towards the first spot. As daylight broke we set our course, through freezing mist and icy wind. A cracking start followed, the first spot of the day producing a couple of fun-sized pike and a perch. A confidence boost, and a sure sign a few fish would be feeding. Once the bites dried up we continued on, the air still freezing cold.

I soon found a couple of areas holding fish. Despite our efforts covering the zones with different techniques and angles, we managed just a few finicky bites. It was time to break for a coffee and lunch before heading out for Round Two. The weather changed dramatically. Sun broke through cloud and the temperature lifted by a few degrees, certainly more comfortable to fish in. We worked back over the productive areas for a few more hours, before switching to Plan B.

The perch had been feeding aggressively for an hour or so around last light during recent sessions. So, after fishing on the move a while longer, we decided to head to an area I had located a few fish this season. Our primary goal to catch big perch on crankbaits. We pulled up on the area, and I decided to do a few passes with the sonar. Pinpointing the fish, and anchoring up in the right place would be the key to success.

After a little searching and test-fishing I found the perch, sheltering on structure. I briefed the guys on the best area to cast, Kevin working a lure around the swim, while Ken decided on traditional bait tactics. Ken made a perfect cast to a group of big perch. It was just a matter of time, and I had a good feeling…

I watched the shoal move in on the sonar screen, then Ken hooked up to a powerful fish. This one kept its head down, kiting like a pike towards cover. A tense battle followed, powerful headshakes and slow lunges. Finally a big perch surfaced. A quick scoop with the net, a life-long PB was broken. Ken was shaking, having just set eyes on his first three pounder.

Kevin was next to hook up, connecting to another powerful fish! Determined to get under the boat, this one fought hard, taking every opportunity to return to the depths. Kevin soon gained the advantage, and I readied the net again, scooping up another great perch in the high twos. Now it was my time to shine…

Having helped a couple of good mates catch PBs, I decided to get in on the action. The perch were active, a few good fish were moving about. I spent a few minutes working crays and shads around the swim. A few small perch later, I figured these fish wanted a proper meal. I swapped over to the crankbait rod, rigging up a 15g Gravity Crank. Fishing over a snaggy bottom, I removed one of the hooks, adding a little tungsten putty to counter the weight change.

Slow and steady, I ground the lure over the snags, pausing for a moment every now and then, allowing the crankbait to lift. It didn’t take long. During a pause the rod slammed over, I was connected to another great fish. I backed the drag off, allowing the rod to flex, absorbing the head-shakes of a decent perch. Thump, thump, thump, a nerve-wracking feeling as the fish drew closer to the boat. I readied the net just in time to see a big flank breach the surface, and quickly landed my prize.

With the technique sussed out, and light fading fast, Kevin, Ken and I cast around our crankbaits. A mad ten minutes of action. Alongside some smaller perch I hooked up with another great fish, scraping two pound. Then, just as the bites were beginning to dry up Kevin hooked a good one. Working a Goby Crank deep, his rod hunched over, yet another decent fish.

I watched as powerful lunges flexed the rod blank, quickly grabbing the net. Another cracking 2lb plus fish, marking the perfect end to our session. It had gone from slow to bonkers in an instant, and just as quickly died. But the guys were thrilled, having both landed PBs.