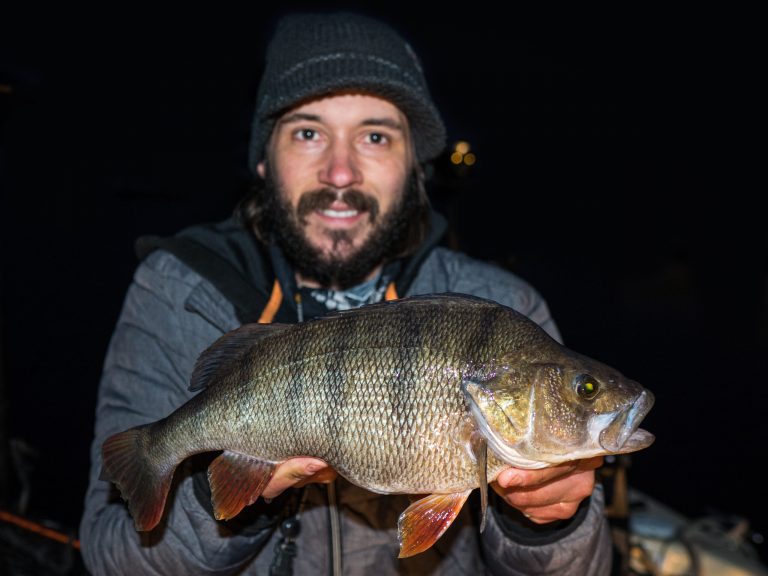 The end of another season of angling has drawn to a close. It’s a time of the year I enjoy, a rest, a chance to clean a very messy tackle shed, and to reflect. I slipped out for one final outing in the glorious weather on March 14th. A hard day, but a few pretty pike and a pub lunch made me content. It wasn’t a bad ending, I managed to put in a little bit of time through the final weeks of the season, to say it paid off would be an understatement. At the end of a really tough day, I was rewarded with an epic fish…

I decided on a late start, with clear water conditions I expected the fish would feed best close to dusk. 2.00pm, I loaded the boat, rigged my rods, and set off in search of some end-of-season bruisers. I spent about half an hour checking the usual areas with side scan, finding very little activity in the bright sun. To pass the time I moved on to fishing cover and shaded areas, eventually tempting a few perch and pike. Slow techniques in tight cover did the trick. A tiny ned craw just hopped along the bottom, hop, pause, repeat. Simple, yet very effective for perch and pike. Despite using such small lures, I expected regular pike encounters, making me choose light wire as a hook length. Either 6lb Knot2Kinky or 10lb Drennan Soft Strand. Both being very easy to knot.

As the light levels began to drop, I decided to resume my hunt for perch. I scanned a few key areas, eventually spotting a roach shoal with several larger shapes stationed nearby, these had to be perch, hanging out in the main channel in bright conditions. Not what I expected to find, but some of these shapes were big! I carefully manoeuvred around the shoal, setting the boat up in a position where I could cast upstream to them. Locked in my sights, visible on the live sonar as I made my first cast, using the same little ned cray that had been productive throughout the day.

Bounce, pause, repeat. I worked the lure through the swim, watching the jig flutter and fall in front of fish. Zero reaction! They couldn’t have been more switched off to the style of lure. I mixed it up again, switching to a much larger swimming-style crayfish. Bigger movements, with a slow drop and pause. This time they flinched. A couple of the smaller shapes moved slightly towards it, inspecting the jig before settling down. Bigger movement was aggravating them, but they weren’t willing to feed aggressively.

I grabbed the twitching rod from the rod rack. A 7-23g SG4, with a 15g Gravity Twitch 95, roach-style pattern with a yellow belly. I worked the lure over the shoal, twitch, twitch, pause, wind, repeat. This time a couple of bigger fish moved in to investigate, following right to the boat. After a few more casts with similar reactions, I decided to stop. Close to dusk, I let the fish settle down for ten minutes before trying again in the fading light.

As the light began to drop, more roach appeared, and the shoal began to move, the odd fish breaking formation, checking out potential food. Now was my perfect opportunity. I cast beyond the fish, beginning an aggressive retrieve. A sequence of aggressive twitches followed by a long pause. Erratic and aggressive, yet slow at the same time.

Twitch, twitch, boom! The tip slammed around, I was in! Machine gun thumps as a powerful fish kited to my left. This one felt really big. Suddenly, it swam to the right, heading toward my bow motor, then diving beneath the boat. Beneath me I felt the full weight of the fish, growing increasingly nervous. It ran back to open water, breaching the surface. A goliath perch appeared! I couldn’t reach the net quickly enough as the beast thrashed at the surface. However, luck was on my side as I landed another giant at 48cms and over 4lbs.

I unhooked the fish, quickly casting again, bang! Another great fish on the line. Slow thumping headshakes made me nervous. Surely there couldn’t be two that size? I readied the net for a second goliath as another great perch breached. Not quite the stamp as the last fish but another great perch in the 3s. I unhooked the second fish and cast again, this time without a bite. Making another cast, this time I slowed it down, a couple of twitches, and longer pauses.

Twitch, pause, plink! A faint tug and I set the hook, feeling the headshakes of yet another decent perch. A smaller fish, perhaps in the mid 2s, a great specimen in its own right. I netted the third and cast again, this time without results. Several casts later and I’d added two more scraper 2s to the tally and the perch shoal had finally moved on. I took a few quick photos and slipped them back. One last haul of the season.

Start typing to see results or hit ESC to close
salmon fly fishing chub roach pike
See all results
More Stories
Big Mako Shark on the Fly
This website uses cookies to improve your experience. We'll assume you're ok with this, but you can opt-out if you wish.Accept Reject Read More
Cookies Policy