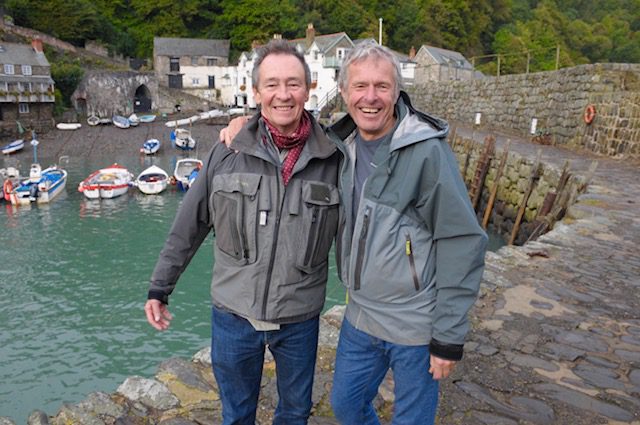 It’s a funny piece to write this one as I don’t want to sound starry, or celeb dominated. I’m not trying to say “look at me” or “I’m so clever, I’ve got famous pals” or anything like that at all. What I am trying to do is to pin down what a fishing friendship is all about and what you might care to look for in one. I’m the luckiest fisherman I know largely because I’ve got the best fishing mates around me that it is possible to have. They are true angling friends, men, and women, that I’d be lost without. They make my fishing what it is, just so special to me. I could talk about Pingers, Ratters, Clarky, Bond, JG, and the team but I’m choosing Paul Whitehouse because on the back of Gone Fishing or The Fast Show I have probably grabbed your attention and made you want to read on. Cunning eh? But I’ve landed on Paul for lots of REAL reasons too. In my book, he embodies pretty much everything that you should be looking for in a fishing partnership.

Paul is a celeb, awful word, but you’d never know it when you meet him. You don’t want airs and graces in a fishing mate, just a real person, down to earth, someone you can bare your soul to. Paul is absurdly funny but he’d never say that is a talent better than being a brain surgeon or a bus driver. He’s completely honest, and you want that, and that is why in large part Gone Fishing is the success it has been. With Paul and Bob, what you see is how it is with no fancy editing or dressing up. For four years nearly I’ve loved being Fishing Consultant on the programs but most of all, I’ve got to know Paul as a true friend, and here’s why.

For me, constant contact is important. Not a day goes by without me phoning Paul or him emailing or texting. It’s something I have come to rely on, something I look forward to. Okay, we talk about Gone Fishing but all the other stuff of life as well and, post-Covid, that hasn’t always been easy for any of us. Perhaps above all, I can tell him about my little triumphs, knowing he’ll care and celebrate with me through and through. The other week I fluked my first 7-pound chub and he was honestly, truly, 100% made up for me. That is how a best mate just has to be. I guess the word is trust.

And of course, Whitey makes me laugh. A lot. It can be a voice – what a mimic he is. Or an observation or a joke or mostly just a comment. If you are serious about your fishing, you need humour to get you through the tough times and blanks – and there are plenty of those in Gone Fishing, as you’ll know if you have watched it. There are times I can feel low after a hard day but a laugh with Paul and I’m right as rain again.

Having a shared background helps. Just this morning he was talking about one of his great days when he was six, down on the Old River Lea. Paul was with his Dad and his sister and they had a net full of gudgeon. Not F1s or five-pound mirrors or stocked rainbows but good old gonks. I told him about my best day, or one of them, with my Nanny on the River Aire just outside Bradford. I had 33 gudgeon from a boat she was rowing and I can see those beauties now, coming up through the shafts of sunlit water. Paul’s first fish was a roach. So was mine, even though I caught it in a net and it was blind in one eye. The whole point is here we have shared references. We know what it is to struggle for fish and all those years on, whatever we catch, we treat like gold.

A shared background often means shared goals. We both worship natural fish, fish that have come from the spawning beds, not the back of a lorry. Paul’s favourite species might just be a salmon and mine might just be a roach but they are equal in their wildness, in their glamour and mystery. That’s why, through Gone Fishing, Paul and Bob don’t always catch much. It’s because Paul sets top targets and if a fish is a sucker and easy, then it’s not for him or the show. That’s why it’s an impossible job to get Paul to pose with a fish for the camera. To Paul a fish is priceless and it goes back as pristine as it came out, whatever a director might ask for.

With a best mate, you don’t have to talk, you just inhabit the same wavelengths. Way back in Series 1 we were after tench in October and they had mysteriously switched off completely. The whole shoot was an impossible struggle, and then, just as the cameras were packing to leave, Paul and I looked at each other. The wind had lost its edge. There was a fly hatch and a fish rolled. The tiniest patch of bubbles fizzed to the surface and I saw him tense. Not a word passed between us but we both knew and fifteen minutes later, the float sank and a tench was in the net and in the can. In Series 3, Paul hooked a big fish on the Wye. As soon as the rod bent, he caught my eye, and his brows raised. Barbel. No doubt. And, best of all, he played it so perfectly, so expertly, I knew the fish I longed for him to catch was as good as on the bank. Over all the shows, there has rarely been a moment when I would have fished differently. Perhaps we are very good or very bad and that does not matter. The point is that we are totally in sync with each other, just how it should be in a fishing partnership destined to last.

Gone Fishing has brought me immense benefits. The crew are great, the production team too. Mr Mortimer is a gem. The travel has been never less than interesting and the ups and downs of TV make life eternally vivid. In Paul, I’ve found one of the really accomplished anglers of my experience but none of this counts for anything compared with making a friend, I hope, for life.

Start typing to see results or hit ESC to close
salmon fly fishing chub roach pike
See all results
More Stories
November News from the Bahamas
This website uses cookies to improve your experience. We'll assume you're ok with this, but you can opt-out if you wish.Accept Reject Read More
Cookies Policy