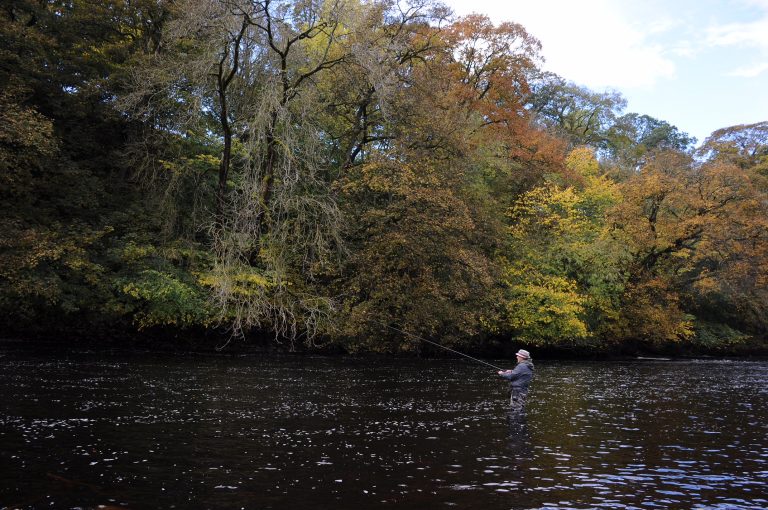 We have heard good things about Olly and his guiding company Fly Fishing Yorkshire. Paul Whitehouse tells us he was a great guy to have on the ground during recent filming in the Darlington area. The fact that Olly’s company is now purely catch and release has also intrigued us. We caught up with him one winter’s night after he was back from one of his rivers…

OLLY, WHAT HAVE YOU BEEN DOING TODAY TO KEEP YOU OUT TILL DARK!?

I’ve just acquired two new miles of a small beck that has hardly ever been fished before. It’s a wonderful, secret place. There’s no road noise, the wildlife is exceptional and the water quality is stunning. The Dales Rivers Trust has done some sampling there and come up with wild browns to four pounds, plenty of yearling grayling and some adult fish nudging three pounds. Awesome stuff for a brook. The grayling aren’t that usual gunmetal colour you see in big fish. The bed here is sand and light-coloured gravel and they seem to reflect that brightness. Their dorsals just explode with colour too. Because it has been unfished, there has been a lot of tree work to do but you only get limited opportunities like this in life so I have gone for it all guns blazing. I’ve been with a work team today and we have already made headway on a kilometre of bank. Much of my life is spent teaching and guiding but nothing teaches you more about a river than hands-on work there. Getting in teaches you so much about the insect life, the contours and just where wild fish can hide. You’d be amazed.

YOU TALK ABOUT GUIDING. THIS IS YOUR LIFE NOW. WHAT ARE THE UPS AND THE DOWNS?

There’s only one down which I’ll come to. The ups are massive, above all I love the variety of people fishing brings to my door. Everyone has a different story and fishing offers unique gifts to all of them. I love the excitement of an angler with that first fish. I appreciate the world-weary banker who just wants to escape. It’s all about characters, stories and rapport.

I love the wildlife here in Yorkshire and being full time on the rivers lets me see every story from start to finish. I don’t just see a dipper and think that’s nice. I see those self-same dippers in the spring, building nests and feeding their young. I then see those young growing, feeding, starting their own lives in the dales. That’s how I see the whole river evolve as the years turn and it is guiding that gives me this unique opportunity. This autumn I watched two adult kingfishers hunting with their four chicks. Those six birds speak to me of the success of the river.

Teaching is a huge part of the guiding process. Repeat customers are satisfying because you see them progress, picking up new skills, perfecting new movements and developing new ideas and attitudes. You begin to see wholly new fishermen emerge, the type of angler that is going to benefit the sport.

Helping someone catch a salmon is a high point. There is something extraordinary and unique about a salmon. Everything about them is magical and I have seen grown men and women cry when they catch one. They might have spent thousands of pounds to get to this moment but that is not the point. Holding a salmon is as elemental as it gets, there can’t be a truer connection with the natural world. I love watching an angler cradle a salmon at the point of release. They support it, care for it in a moment of complete intimacy. Letting that salmon live is a best moment in life!

Downsides? Well, we can take even the best job for granted and there are tough days. I miss the lack of my own personal fishing but I have learned that giving up what you love to give that love to someone else is a fine thing. I do get tired of fighting the weather. Every day sometimes seems more extreme than the last one.

HAVING SAID THAT, OLLY, DO YOU FEAR FOR THE FUTURE THEN?

I don’t think we can avoid the feeling the summers are getting hotter and the winters warmer. We don’t see those weeks of hard frosts that we used to and that is bad. Frosts are nature’s way of calming rivers down, of getting rid of bad bugs and viruses. It’s now the second week of December and the grayling are just shoaling together after some snowmelt. Not long again, that would have happened hereabouts the end of October. There’s something going on.

Basically, I am an optimistic angler and it is true to say I am nervous about the future. I’m a farmer’s son and I don’t like the amount of fertiliser that scorches rivers with runoff. There is too much sediment from fields that drain too fast after rain. The water is in the rivers before you can blink and the levels are up and down like a fiddler’s elbow. If you think about salmon and sea trout that means there is a very short window for them to migrate. That sediment never really clears either. On all the rivers and becks the gravel gets packed hard by this sediment to the detriment of spawning and insect life. Gravel doesn’t “scrunch” anymore like it did. What has farming to do with guiding? Guiding is all about understanding the circle of life and I’ll tell you it is an uphill struggle. Houses. Infrastructure. Brexit even. The future will be hard but we’ll get there.

YOU GUIDE ON THE URE, SWALE, WHARFE, ESK AND ANY NUMBER OF SMALLER STREAMS BUT WE GET THE FEELING THE TEES IS YOUR LOVE?

I see the Tees as the people’s river. It has had a long and chequered history with the mines along its valley but 1983 was a key year. A crashed tanker emptied its diesel load into the river upstream and there was a fish kill of national news proportions. It was off the chart but the compensations were huge. The money allowed the clubs to buy their sections in many places and now a huge proportion of the Tees is club owned and fishable for reasonable sums. Post-1983, the river bounced back incredibly quickly with hugely rich fly life. Now it’s grayling heaven but I find the salmon very exciting myself. The Tees salmon are different in that they don’t show themselves. It’s easy to think they aren’t there but just this year my very small circle of friends and I have had 80 fish. Amazing for the small amount of time we put in. I go electro fishing with the Tees River Trust and you’ll find salmon parr in all the headwaters. The Environment Agency has done really good work getting returning fish through the barrage and up into river and I’m proud to be a part of a big, concerted effort that has seen fantastic success.

The Tees has the wildest of wild brown trout anywhere. High Force is a massive waterfall up in Teesdale and it effectively stops trout movement from passing. The trout above the Force have their own genetics and they even look prehistoric with blunt faces and unnaturally dark eyes. Widdybank is a top area for them and they are there in huge numbers. These same fish are present in the moorland reservoirs that haven’t been stocked and they are wonderful, adaptable strains-even producing “ferox” to six pounds or more.

OLLY, YOU SEE HUNDREDS OF ANGLERS ANNUALLY. WHAT ARE YOUR TOP TIPS?

Think outside the box. Dare to do different. Anglers get stuck on what they read or see on You Tube. Weigh up the species and the situation and fish how you think, not how you are told. The England River Team do odd and it works for them. Don’t worry about standing out or being judged. A good example is the question of rod weight. We’ve been brainwashed into thinking 2wt, ultralight in every circumstance. There are times you have to go 5 or 6wt, to get the right line out. The art of catching fish has been replaced by the art of doing the norm.

Be patient. Be effective. Never rush. Make every cast 100% right. Don’t thrash the water and hope it works for you because all you do is drive the fish further away from you. Watch for the exact moment when that one cast will do the job.

Reduce your fly box. 10 or at the most 20 patterns are all that you are ever going to need. The trick is to fish those flies properly. Go on a River Fly Partnership course. That will teach you to look at nature’s fly box where everything is small, dark and dull. There’s no tinsel in nature.

Go for some casting lessons, no matter how good you think you are. You can always improve, me included. You have to reach the stage where you can put a fly out perfectly at any range whatever the conditions. If you can’t fish spot on all the time, you’ll never progress.

YOU ARE A PROUD EXPONENT OF CATCH AND RELEASE.TELL US MORE.

I’ve fished most of my life for salmon, sea trout, brown trout and grayling. I’ve gone complete catch and release because I see no need to kill any WILD fish anymore. Stocked fish are different but when it comes to the wild, we should be educating people and protecting the future of our river species. You hear comments like “one for the pot” and it’s my right to take a fish.” I don’t believe it is anyone’s right to kill a wild fish. It’s not our right to take anything from the natural world. And remember this. How do you know that your big fish is not a gift from a previous angler who has had the wisdom to release it? As I have said, being a guide is all about playing a part in the circle of life….not ending it.