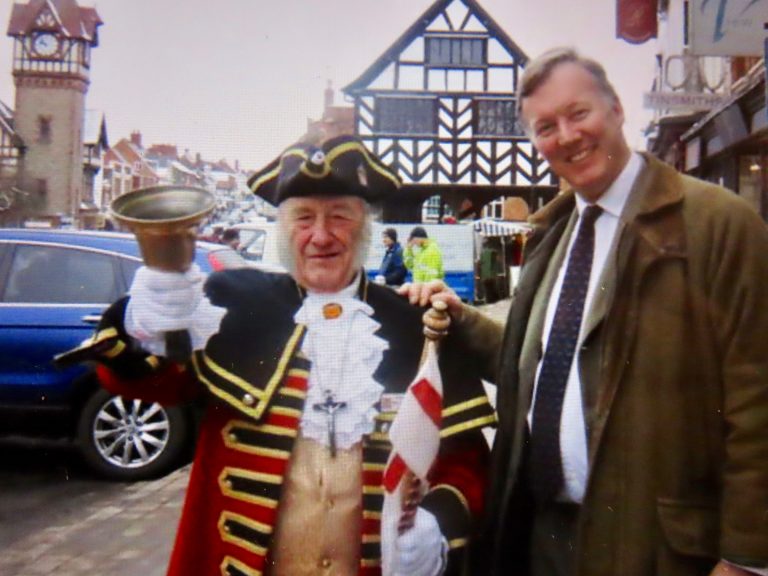 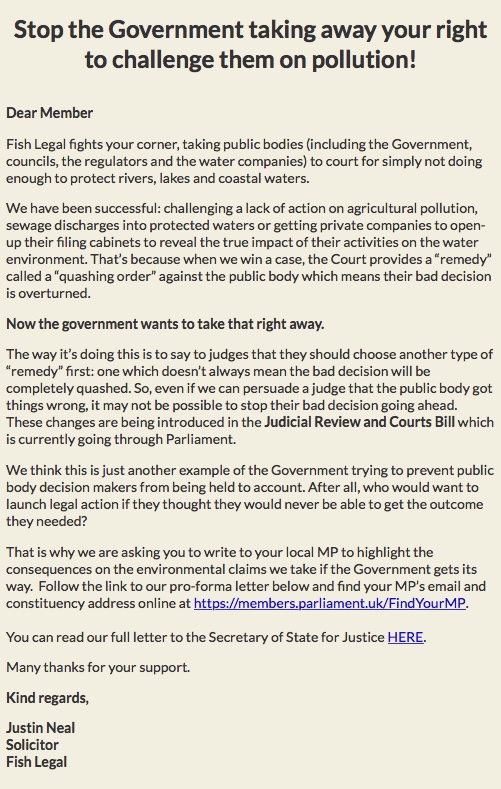 I have a great regard for Fish Legal, the pollution fighting arm of the Angling Trust. Yesterday they sent all members a call to arms to contact their MPs regarding the right to challenge the government over pollution incidents.

I think, after so much debate, many of us believe the largest threats to our rivers at present are multifarious agricultural pollutions, the dumping of sewage (human and otherwise), and of course predation.

Following the instructions clearly laid out, I tapped in members.parliament.uk and went onto the Find Members box.

In went my postcode and lo and behold in seconds the information that Bill Wiggin is the sitting member for my North Herefordshire constituency was revealed.

As a result, I have spent a happy hour getting a measure of the man, as far as research can reveal.

He likes shooting and makes the point that estates where there are game birds have a generally broader diversity than those that do not.

I am not getting into bed with the shooting lobby here I stress, but I do live next to a rough shoot and the endless hedgerows and copses are a bird watcher’s paradise. Let’s move on…

Bill Wiggin supported the badger cull, and on that I make no comment whatsoever.

Where I would applaud him is his letter to the Chief Secretary of the Treasury, asking for support on the Wye phosphate calamity. It is on this issue I am going to write to him later today.

What I want is some indication as to progress, especially regarding the Wye Phosphates Working Group. After years of campaigning, the phrase “working group” immediately fills me with dread and apprehension.

I will report back! 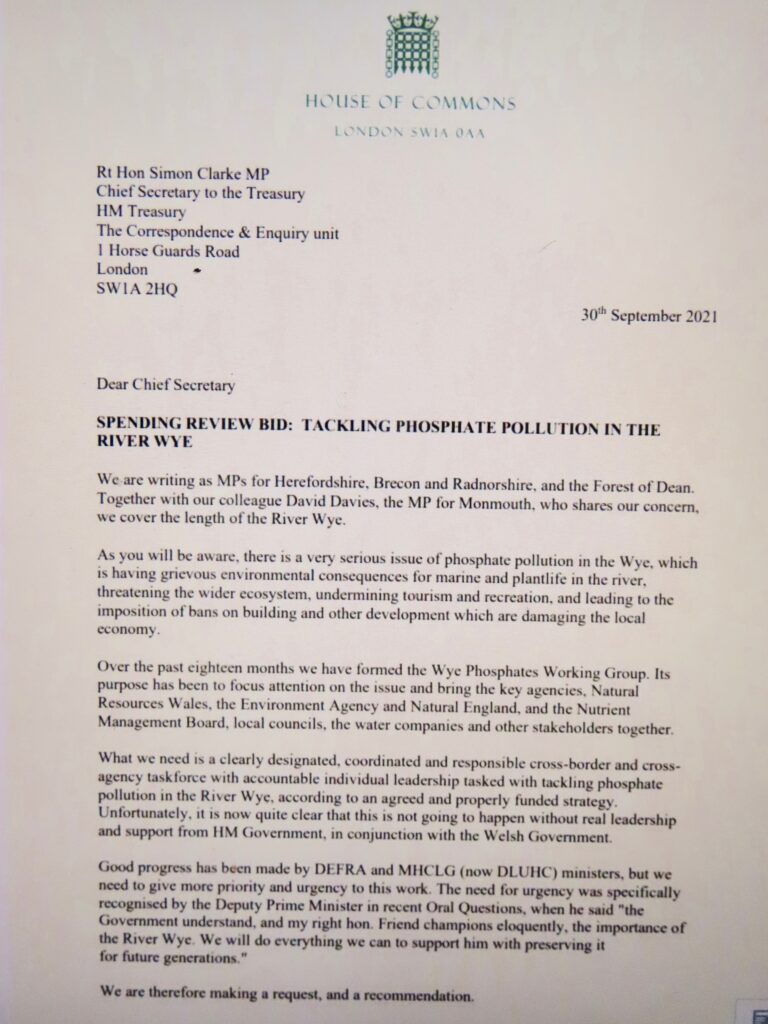 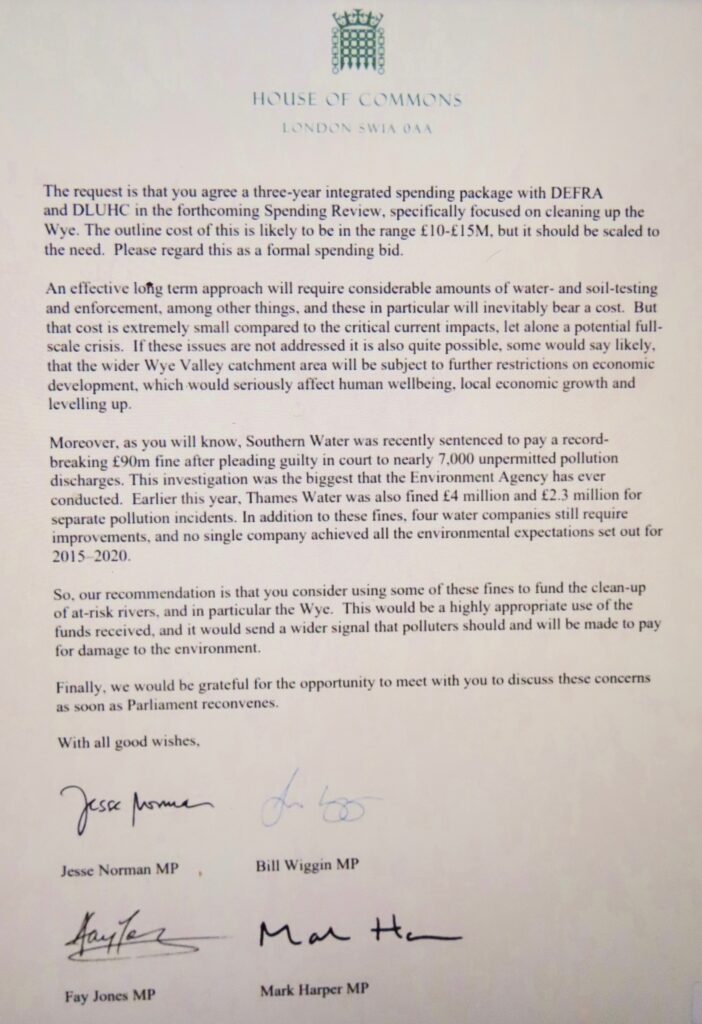 As promised, my letter to my MP, Bill Wiggin.

Too short? Too conciliatory? Or might it open a door to further dialogue?

Any developments, then be sure you’ll read them here first! 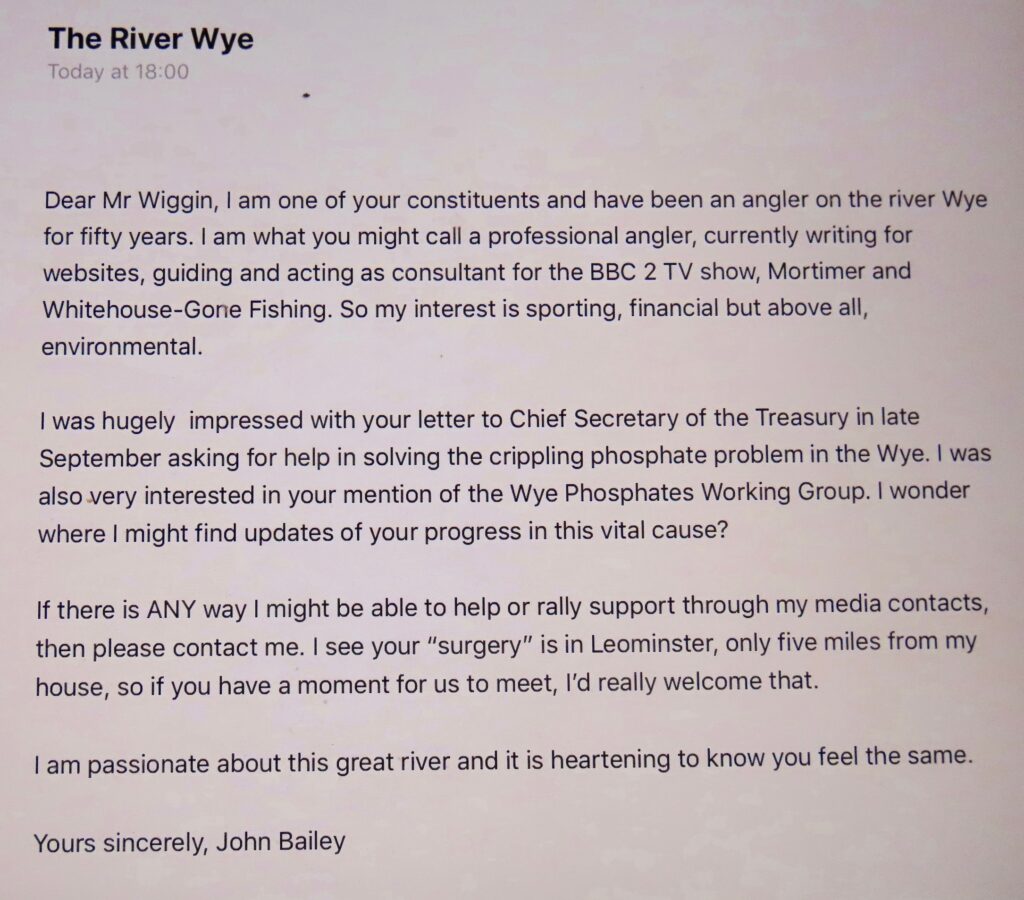 Well, as some of you know, I fired off my letter to my MP Bill Wiggin last night at 6.00pm. At 6.34pm, I received a personal, 500-word reply. No pro forma brush-off. A real response. It might be inappropriate to quote the letter in full, as Mr Wiggin is less than complimentary about some bodies, and it might be counter-productive to name them at this stage.

Mr Wiggin is also completely transparent. Here I do quote… ”The reality is that it will be slow (unacceptably) before we have the river back in the best possible condition.” BUT he continues “everyone is trying to do the right thing now, which means we shall win.” He suggests that we meet on the river rather than in town, because he has never yet had time to go fishing, despite twenty years of living in Herefordshire.

Right. It is easy to be cynical, and don’t I know that personally? That’s why I gave up on the Wensum and came to the Wye, because the twenty years of talk had driven me potty… make that thirty five years actually. Like some who have engaged with this, I am unsure about some of the bodies in existence and sceptical about their impact. BUT…

Do we simply say no one has achieved anything and give up?

Do we refuse the offer of engaging with an influential MP? I agree this government as a whole has a lot to answer for, but that does not mean there are not good people working therein.

Can we agree that far more people are talking about the river issues than there were? Keeping the debate stoked is surely necessary if people like Bill Wiggin are to take the matter to parliament. When I last looked, parliamentary democracy is under threat, but not dead yet. Poultry farmers might step up their game because they might think it is the right thing to do. They might if their core customers put pressure on them. They might have to if government orders them to do so.

Regarding the whole issue of the dismantlement of the ACA and the formation of AT, it might be history but that does not mean that it is dead and buried in my mind. I admire the AT and Fish Legal but I personally wonder if an EFFECTIVE ACA, working SOLELY on water improvement and in isolation would not be more effective. I’m sure Jamie Cook would be happy to put me right on this, but I never liked the idea of the ACA losing independence and becoming subsumed under a larger umbrella.

I have now spent days on the net trying to understand EXACTLY what chicken poo, phosphates and over-enrichment are all about. There is a mountain of information out there and much of it is new, to me at least, when you really delve and take the trouble to understand it. 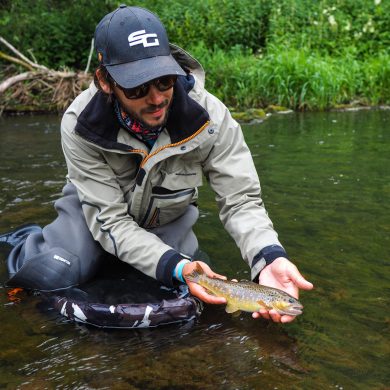