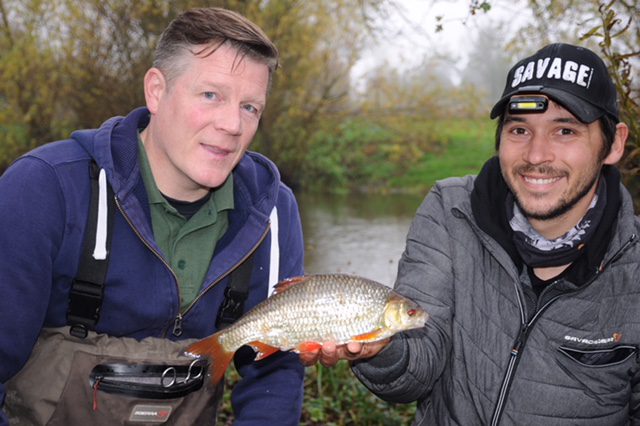 So, how did we get on, Ian and I, on our second day on the river Wensum. Day One had been a success undoubtedly – when is a near “two” roach not a triumph these days but, of course, like it or not, ounces do matter. I awoke with roach on my mind!!

Robbie Northman was joining us for the day and that alone is a result. Can there be a more talented young angler on the UK scene today? I certainly haven’t met him or her if there is. And to add joy oh joy, the night rain had pushed the river up six inches, but more vitally, had given it a dash of late autumn colour. A recently ottered jack pike gave us cause for concern but we need not have fretted, fish came thick and fast. It wasn’t the perfect day. This was a day ticket stretch and there was endless activity to cope with and the colour did drop out fast after 11.00am but by then we had enjoyed a roach fest.

Ian was in a deeper, slower bend where he could lay on, a couple of feet overdepth. He moved now and again to rest the swim but he kept coming back and it worked with a dozen roach to mid “ones.” Robbie and I trotted for the main part and again clunkers to 1.09 fell to double maggot on a 16. As the water cleared and the roach drifted away, the dace took over, scores of them, silver beauties to a weighed 13 ounces. Later afternoon, after a draining battle, I lost a ‘six” plus chub at the net. Plus? Plus a fair bit I’ll tell you!

There was a moment, around 3pm, when the sun broke through and I was thigh deep in the flow, that I realised what bliss the day was. How good does it get? The shifting, golden lights. A tiny, well-shotted float burying over and again as one silver dace after another fights to the net. Glorious. The rhythm of casting, mending, striking, playing and admiring these glowing fish. This was wonderful. But, as ever, POINTS TO PONDER!

Two or three maggots on a 16 are my go-to but one of them always can decide to curl itself over the hook point and mask the strike. All you feel is a dull thud as the fish rolls off free. I make it a religion to check the hook is clear before every cast, just in case. You might get just the one chance…of a “two”, perhaps once in a lifetime. By the way, in heavier, more powerful flows, that hook might become a 14, even a 12.

I also get into the routine of changing the hook itself every 6 fish or so. Big roach are the Houdinis of the fish world. If they can throw a hook, they will. Don’t give them a ghost of a chance is my motto.

Of course, maggots are not selective. You pick up everything from big chub to sprats of gudgeon and every struggling fish that goes past them reduces the chances of big roach biting. Flake? Fantastic but make the hook a 10 I’d say. Corn? I actually tried it and not a bite did I get. A great summer bait but not so come winter..that’s my finding anyway.

I fed heavily. Every cast I put in a handful of loose maggots, not a pinch. In mild weather, in a coloured river, I like to get the swim going. I guess in the day I went through four pints, not bad on a smaller river.

Of course, the BIG debate is this. Do you stick with a swim and build it up over the day? Or do you move when you sense the fish are wising up and scattering? I don’t know..honest. If the river is not busy and if there are vacant swims, then I am a mover. But I have known plenty of stickers who have done as well, or better, than I have. Temperament? How you like to fish? There are no wrongs in this sport of ours.

I like to trot smooth water in an easy, rhythmic way. I’m not hot on holding back hard. I like my shot bulked to get the bait down. I play fish fairly hard, in part to avoid hook slips, in part to minimise pike attacks on the retrieve. If pike are a problem, I move OR try to catch it and move it instead.

Use kit you love, you have confidence in and that you find helps you fish well and without fatigue. Me? I love my Hardy Marksman 14 footer and my Piscario pin…costs a bomb but, hey, it’s for life. The combo is meaty but well balanced, positive, and still tactile. Given half a chance I’d back myself to land Moby Dick if he came along. I’ve trotted a thousand miles with these two and they just get better, extensions to my very body. And that is how it should be for you too.

Guys around us were using keepnets. They weren’t in a match. They weren’t kids wanting to show their catch to their parents. These were wild, fragile fish, impossible to replace unless Nature plays her part. SURELY it is time to say goodbye to them outside competition fishing…what do YOU think?

And why are maggot pouches made with deep seams to them? After the session, in the dark, you think you have washed them out but a score remain, hidden and buried, waiting to weevil their way out as you drive home. It’s fly time come a warm New Year!

Start typing to see results or hit ESC to close
salmon fly fishing chub roach pike
See all results
More Stories
Stories from the Castle
This website uses cookies to improve your experience. We'll assume you're ok with this, but you can opt-out if you wish.Accept Reject Read More
Cookies Policy