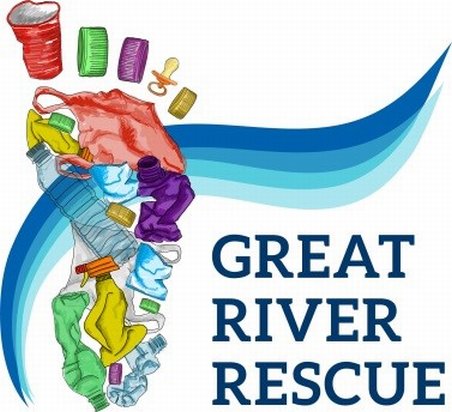 The public is invited to help rescue the nation’s waterways during the month of October, by taking part in England’s first national clean-up focused on rivers. Plastic litter is a major issue blighting the nation’s waterways and the Great River Rescue, launched by a group of environmental organisations including the Angling Trust, invites the public to take direct action themselves.

Groups are invited to register their river clean-up events on the campaign webpage in September to raise awareness of the events to take place during October.

The campaign has been organised by environmental charity Thames21, the Marine Conservation Society, the Angling Trust and the Canal and River Trust.

It is inspired by Future Dust, a large-scale artwork by Maria Arceo in the shape of a giant plastic footprint commissioned and as part of Totally Thames, the September-long annual celebration of the River Thames. The installation will tour to different riverside locations across London and will be illuminated at dusk by Dutch interactive light artist Tim Scheffer.

Maria has spent a year collecting plastic litter from more than 40 beaches along the tidal Thames with the help of Thames21 and many committed volunteers. During the year, she became a Thames21 Badged Group leader by completing the charity’s  Leading a Waterway Clean Up course, enabling her to lead clean-ups with volunteers. Special clean-ups were arranged to make sure plastic removed by Thames21 volunteers was incorporated into the sculpture.

Maria Arceo said: “I really recommend going on a clean-up. Not only does it feel very satisfying to remove the plastic items that cause so much damage, it’s fascinating to see what’s washed up and it’s usually great fun being beside the river, in good company. Because of Thames21’s long experience running clean-ups, I found their training and support invaluable.

“I was blown away when I realised that the people cleaning our rivers were actually kind volunteers that gave away freely their spare time. They are dealing with what is, at first look, a seemingly simple aesthetic problem that has, in actual fact, proven to be one of the biggest environmental and health related catastrophes that would define and reflect this short period in our confined human history, known as the Anthropocene. With my one-year-long art project ‘Thames Plastic & the exploration of future dust’ I wanted to give people a chance to experience first-hand, and to visually quantify, the serious amounts and types of everyday disposable plastics that, due to careless disposal, end up in the Thames – and eventually in our oceans and the planet’s food chain.”

Debbie Leach, Chief Executive of Thames21, said: “Maria Arceo’s incredible artwork is an impelling and timely insight into the devastating quantity of plastic invading our waterways, and its impact on the planet. Now, we’re urging the public to organise their own clean-ups across England, or take part in one organised by the campaign partners.

“Thousands of pieces of rubbish find their way into our streams, rivers, canals and oceans every year. Much of that litter is plastic. It causes untold damage to wildlife, stops us enjoying our rivers and open spaces and can potentially threaten our own health by getting into the food chain.

“We call on community organisations from sports teams to arts groups as well as individuals, youth groups, councils and housing associations up and down the country to get down to their local stretch of river in October and register their clean-up as part of the Great River Rescue.

“For many years, Thames21 has run nationally-accredited training courses on how to lead a waterway clean-up. But for the first time, we can help groups who aren’t close enough to a course by publishing a guide which gives you the basics on how to put on a clean-up event.”

Mark Lloyd, Chief Executive of the Angling Trust and Fish Legal, said: “The Angling Trust is delighted to be part of this campaign to tackle this growing problem head on with action and education. Anglers see at first hand the blight of litter in our rivers and on our beaches and witness the impact on aquatic wildlife. Many angling clubs already organise river litter clean-ups as part of our Take 5 initiative and we will be encouraging the millions of anglers nationally to get involved in this excellent campaign by Thames21.”

Justine Millard, Head of Volunteer Engagement at the Marine Conservation Society, said: “We’re thrilled to be supporting the Great River Rescue. Over the last two decades we have found increasing amounts of plastic litter on our beaches and we know some of that will have got their via our rivers. Any initiative that will remove unsightly plastic from our rivers will have a knock on effect for our beaches and that can only be a positive thing for both the UK’s inland and coastal waters. We would encourage as many people as possible to sign up to the Rescue and then get involved in our own river clean events taking place until June next year which have been sponsored by Waitrose.”

Jon Guest, Waterways Manager at the Canal & River Trust, said: “Rubbish being thrown into our canals and rivers is a problem that is not going away. The Great River Rescue is a great way to highlight the issues caused by discarded plastic and litter. We should be protecting these special places not damaging them. Our excellent army of volunteers help us to clear rubbish and we will be encouraging more people to join them as part of this campaign.”

A launch event for the campaign is being planned on World Rivers Day, Sunday September 24.

Read about the campaign at www.thames21.org.uk/GreatRiverRescue where a guide to putting on an event is available and the public can register an event.

>> The Angling Trust would love to hear from any angling clubs or individuals who are taking part in the Great River Rescue. Please send your photographs to Andy Wedgbury, Digital Engagement Coordinator for the Angling Trust, via Andy.Wedgbury@anglingtrust.net.