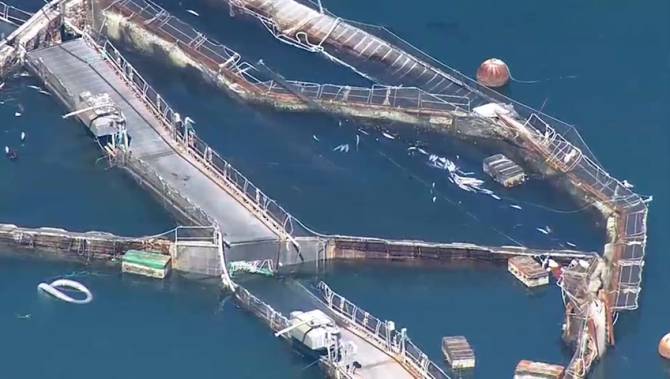 Thousands of Atlantic salmon escape from fish farm into Pacific

Thousands of Atlantic salmon may have escaped into Pacific waters after a net pen holding 305,000 of the fish was damaged at a farm in Washington state, leading wildlife officials to call for anglers to catch as many of the fish as possible.

The fish farm’s owner, Cooke Aquaculture, said on Wednesday that several thousand Atlantic salmon may have ended up in the waters around the San Juan Islands after part of a net suffered a “structural failure”.

The company initially told wildlife officials that an estimated 4,000 to 5,000 of the fish in the net pen had escaped, but said that the exact number would be determined once tidal conditions improved enough to allow divers to fully assess the farm. On Wednesday, the company told the Canadian Broadcasting Corporation that the number could be “much higher”.

“It appears that many fish are still contained within the nets,” the company said in a statement. “Farm crews are on site, working to stabilize the farm and to recover as many fish as possible, when conditions permit.”

Fishermen in the region – out hoping to catch Chinook salmon in recent days – said the Atlantic salmon had already been turning up in their nets. “It’s a devastation,” Ellie Kinley, whose family has fished Puget Sound for generations, told the Associated Press. “We don’t want those fish preying on our baby salmon. And we don’t want them getting up in the rivers.”

Despite being listed in Washington State as an invasive species capable of preying on native populations of fish and spreading disease, Atlantic salmon are a major aquaculture species in Washington state as well as in British Columbia…