It is Good to Visit New Rivers Sometimes isn’t it?

Like football fans and their favourite teams, many anglers maintain surprising loyalty to the beats and rivers they visit, even when the opportunity of moving to something significantly better arises. I once had the pleasure of sharing seats on a train between Manchester and London with an eloquent old gentleman who, with genuine tears in his eyes, gave me a moving and delightfully descriptive account of the beat he had fished for a week each year for the last 20 years. I enquired as to the biggest fish he had caught. He looked rather surprised and said “Oh I have never caught anything but I am sure I will do one day!”

I try to be faithful to my chosen rivers but, occasionally, I wander if the chance arises. In fishing terms I am the eternal naïve optimist, convinced that, eventually, I will come across that hidden gem. Namely a river which always flows at the best height for fishing; a beat to myself in peaceful countryside with numerous attractive pools which are easily waded and covered with the fly, and to which vehicular access can be obtained along a track on the bank; most importantly liberally populated with fresh run salmon that, obligingly, rise at regular intervals to grab the fly firmly and, hold on to it throughout vigorous and exciting fights.

Before I retired from practice as a barrister in the criminal courts opportunities to fish were limited. However, a free space came about in my diary when a prolific burglar of my acquaintance, who I represented regularly, was stricken with an unexpected bout of conscience and rather selfishly, pled guilty in advance of his trial thus depriving me of gainful employment for a week in September.

I had no fishing planned but an angling friend handed me an advertisement for beat X on the River XX (I will keep the names hidden to spare any embarrassment!) I was unfamiliar with the beat but knew the river by reputation. Certainly it was not in the premier league but, in the back end, was definitely in the play-off zone of the first division. The prospect of applying creosol to the garden fence and shed and doing all those other little household repairs that had been promised but remained undone did not appeal so I decided to make enquiries.

Having “Googled” the name of the river, I found a brief reference to the beat on about page 25 but it was vague and uninformative. The wording of the advertisement should have been sufficient warning. “The beat has been lightly fished in recent years but does provide consistent fishing for a limited number of discerning anglers throughout the season.” As subsequent events proved the latter statement was correct although it omitted to say that the fishing, whilst consistent, was consistently poor! It was obligatory to stay at the local hotel and anglers were strongly advised to avail themselves of the services of one of the local “guides”. I was pleased that I was able to secure a rod for the week in question at what was only a mildly outrageous price.

In order not to upset those readers of a delicate disposition, I will gloss over the nature of the accommodation and the food presented to me at dinner and breakfast. Suffice it to say, to those old enough to remember Egon Ronay, that he did not recommend it!

My guide, who introduced himself only as “Arry” turned up an hour late looking as if he had passed through two haystacks on the way. On a younger man his unshaven appearance might have passed as “designer stubble” and he was wearing a T-shirt emblazoned, rather curiously, with the words “a day spent fishing here is time in eternity”.  If that was correct then, in due course, I am bound for a rather hot unpleasant place.

It was worrying that he insisted on using my sat nav to find the river as “all these tracks look the same to me”. I quizzed him about the best flies to use. He looked utterly amazed, shook his head and said “oh no, no, no, we don’t use those fancy things here –its prawns shrimps or worms prawns shrimps or worms.” He repeated this mantra like a fish and chip shop proprietor might indicate his menu to customers in the queue.

When we parked there was no sign whatsoever of a river let alone the beat. I was alarmed when “Arry” asked me if I had a scythe in the car. He explained that the path down to the beat, a nice 20 minute stroll, might be a bit overgrown and difficult, particularly with an enormous fishing rod like I was carrying. Dismissively he threw my landing net back into the boot as, if I had the good fortune to hook anything, there was always an old gaff or two lying about in the undergrowth.

The beat consisted of one slow moving modest sized pool overgrown by trees on both banks. My fellow “discerning anglers” comprised of a very elderly couple accompanied not so much by a guide as a carer. Sitting comfortably on folding chairs, they were monotonously hurling large prawns (one purple, the other yellow) into the head of the pool after which, supported by pike bungs, they processed in unison sedately down the length of the pool. Obviously the etiquette of the beat did not require two steps between each cast but I did notice that, at the tail, there was just about enough current to work a fly.
It took something of a triple spey with tuck to get the line out but the very first cast the line started to draw away strongly which lifted my spirits immensely. Unfortunately, as I raised the rod, it also raised to the surface what seemed to be tennis netting suspended between both banks to which my Willie Gunn was firmly affixed. “That wasn’t there last week” Arry exclaimed, “those b*******from………(the adjoining village) must be at it again!”

As he had neither waders nor wellingtons he declined to try to remove it and advised me against doing so as “they don’t like “off comers” interfering with their “sport” and it could get nasty!”.

When not under my wife’s thumb or a judge’s gavel I could be quite decisive. I was not going to be the only one deprived of gainful employment that week. Enough was enough and I was going home.

“Arry” did not seem unduly surprised when I paid him off, adding a ridiculous tip in the hope that I would be able to leave with the tyres of my vehicle intact. As he counted the notes before disappearing into the public bar, he did comment that most gentlemen stuck it out for at least two days before leaving.

The ancient retainer at the hotel expressed no concern when I checked out, but did enquire whether I might like to put some comments in the dog eared guest book on the hall table?  I would certainly have liked to put some choice comments but I did not have the nerve to do so!

On the long journey home I mulled over in my mind the advantages of my regular rivers. The disadvantages now seemed somewhat trivial. I promised myself that I would not wander in the future but, in my heart, I knew that temptation would inevitably get the better of me again.

You can read our book review and how to buy yourself a copy HERE. 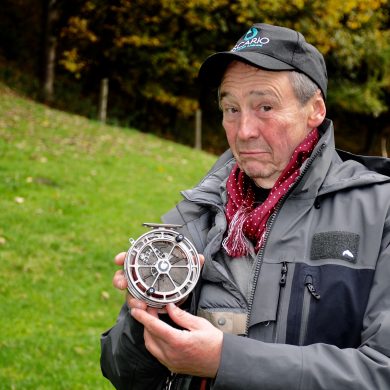