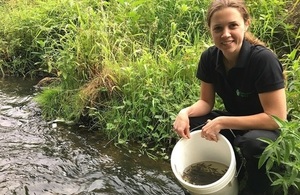 The Environment Agency has released more than 8,000 young trout into North East rivers to give stocks a boost.

The trout – bred at Kielder Salmon Centre in Northumberland – were released into the tributaries of the River Tyne.

There was 4,000 each released into the River Ouseburn at Woolsington and Brunton Park, and the River Team near Kibblesworth and Beamish.

The fish were released to the two recovering river system to support wider restoration projects and encourage natural recovery of fish stocks in the future.

“It’s hoped by giving the two rivers a boost it will help aid their natural recovery. Restocking is just one of the many things we do together with our partners to develop fisheries, including reducing the impact of any industrial legacy and pollution incidents.

“But we’re also working hard to improve habitats and remove barriers to fish migration which make it difficult for fish to reach their natural spawning grounds.

“Water quality is the best it’s been for decades and targeted and appropriate restocking has helped the restoration of natural fish stocks and viable fisheries. In fact returning salmon have already been seen in the lower reaches of the River Team recently, which is great news.”

In addition, last year they released 40,000 fish including chub, dace, roach, bream, barbel, tench, grayling, crucian carp and rudd into rivers across the North East which were reared at the Environment Agency’s fish farm near Calverton, Nottinghamshire, using funding from rod licence sales.

The Environment Agency releases fish into our waterways annually. Fisheries officers target fish stocking activity using data from national fish surveys to identify where there are problems with poor breeding and survival.

Start typing to see results or hit ESC to close
salmon fly fishing chub roach pike
See all results
More Stories
Salmon-tracking device recovered off Nova Scotia
This website uses cookies to improve your experience. We'll assume you're ok with this, but you can opt-out if you wish.Accept Reject Read More
Cookies Policy